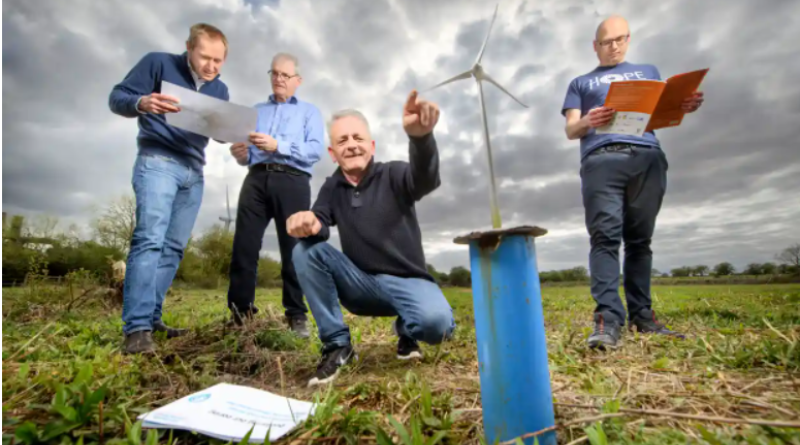 A community group in one of the poorest parts of Bristol has met its funding target to build the tallest wind turbine in England, despite a lack of any central government funding for locally owned wind power generation.

The group of residents from Lawrence Weston, a deprived housing estate on the edge of the West Country city, have secured £4m, and expect to begin groundworks for the turbine, which measures 150 metres from its base to the tip of its blade, in June. The wind turbine, which has a maximum capacity of 4.2MW, will sell energy to the grid. The group estimates it will bring in at least £100,000 a year.

Mark Pepper, who grew up on the estate and helped found the Ambition Lawrence Weston charity to regenerate the area, said the turbine would make hundreds of thousands of pounds for community projects, including a new renewable energy skills training centre and a crisis fund to help local families trapped in fuel poverty.

“The fantastically exciting work begins soon. I feel proud of the residents as there have been a lot of challenges along the way and a lot of barriers put in our way,” he said. “Yet the residents have stayed resolute because they know this could be a gamechanger for Lawrence Weston.”

However, he added that the turbine, which will generate enough power for 3,000 homes, had taken eight years to build because the government had made it so difficult to get planning permission and provided no financial support for communities to generate their own power. “The government’s resistance to more onshore wind has been a problem,” he said. “It’s been a long slog but hopefully soon the residents will be able to reap the rewards of all their hard work.”

Government research shows community-owned energy delivers 12 to 13 times more social and community benefits than equivalent commercial installations. The profits from the Lawrence Weston scheme will be partly used to help families on the estate unable to heat their homes and keep the lights on as energy prices shoot up. “A lot of residents here are on prepaid meters – if they can’t afford to put money on, they are effectively cut off,” said Pepper. “We see a lot of people running out of gas and electricity.”

Other areas are keen to follow Bristol’s lead, with around one-third of the 220 local groups linked to Community Energy England interested in developing similar on-shore wind schemes. But the organisation is only aware of a handful of small-scale community-owned turbines that have been erected in England since David Cameron’s Conservative government tightened planning laws, requiring, unlike other infrastructure projects, proof of local backing, as well as ending financial support. Although wind projects were allowed to apply for subsidies again in 2020, only developers with commercial-scale windfarms were able to meet the minimum energy threshold.

The government’s new energy strategy, which was published last week, disappointed many community energy campaigners. There is no ringfenced funding for community projects and no target for increasing on-shore wind power generation, even though it is regarded as the cheapest and quickest way to generate electricity. The strategy only promises to consult with “a limited number of communities” to develop turbine projects in return for lower energy bills.

The Lawrence Weston turbine, which will be erected on Bristol city council-owned scrubland in nearby industrial Avonmouth, is expected to be completed next spring. The electricity it generates will be sold to the National Grid. The vast bulk of the funding comes from Thrive Renewables, a renewable energy investment company, which provided £4m for the project. Other funders included Bristol city council and the West of England Combined Authority.

Andrew Garrad, visiting professor in renewable energy at the University of Bristol, said the turbine would be the “biggest in England”. Garrad, who is on the board of the energy company set up by Ambition Lawrence Weston, added the height and size of the turbine allowed it to catch the maximum amount of wind. “The energy gathered from a wind turbine goes up with the square of the diameter – so if you double the diameter, you get four times the energy,” he said. “And as you go higher, you get more energy because the wind blows more strongly.”

A shorter turbine would have been uneconomical. David Tudgey, the project’s development manager, who took the turbine through planning and funding rounds, said: “We had to go for the tallest turbine possible for the site because there are no subsidies available – anything smaller wouldn’t have made enough money to benefit the local community.”

Tudgey added that ministers should create a national community energy fund to allow others to copy Lawrence Weston: “Communities up and down the country need help to deliver similar schemes that address fuel poverty and climate change.”

Matthew Clayton, managing director at Thrive Renewables, said the funding would enable them to get the turbine built and operational. “Locally owned projects such as these will play a fundamental role in the future energy system, providing clean electricity that will help to reduce bills and generate revenue that can be plugged back into the community,” he said.

How floating wind turbines could change the global energy map