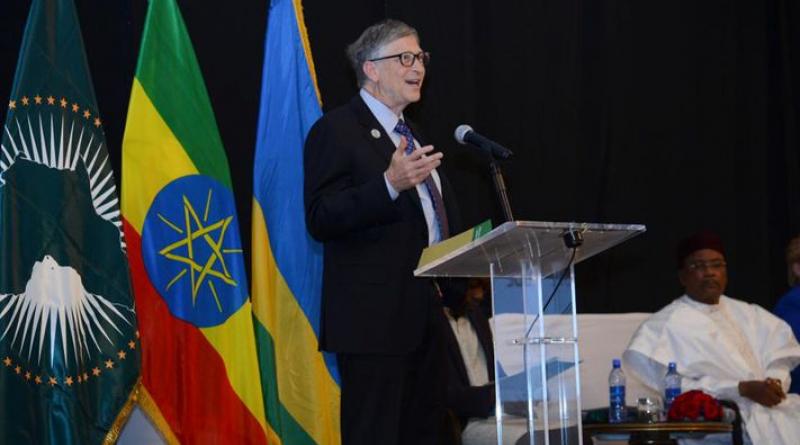 Bill Gates, chairman of the Bill & Melinda Gates Foundation, speaks at the “Africa Leadership Meeting – Investing in Health Outcomes” held at a hotel in Addis Ababa, Ethiopia Saturday, Feb. 9, 2019. The meeting, which took place ahead of the 32nd African Union Summit, was “to launch a new initiative designed to help deliver increased, sustained and more impactful financing for health across Africa”, according to the African Union. (AP Photo/Samuel Habtab)

When Microsoft founder Bill Gates spoke recently at the African Union’s annual summit in Addis Ababa, Ethiopia, he underscored two of the things about which he is most passionate: the African people and clean energy, or more precisely, the need to bring electricity to a growing population in a climate-friendly way.

The Bill & Melinda Gates Foundation spends half of its budget, or $2 billion a year, on the continent of Africa. The money is going to improve medical care and agribusiness, both of which are essential to enhance living standards. But it is also trying to electrify the continent — one that has 500,000 people with no access to power, which is the basic building block for prosperity.

And now is the time: By 2050, Africa is expected to grow from 1.1 billion people to 2 billion. Those folks need medicine, food and electric power. According to the International Energy Agency, sub-Saharan Africa will require $400 billion by 2035 to modernize its energy foundation. The World Bank Group will invest $200 billion globally to 2025 to help get to a low-carbon future.

“We need to do a much better job of informing people about the challenges,” says Bill Gates in his year-end 2018 blog. “But I worry that wealthy countries are turning inward … (and) they’ll decide these efforts aren’t worth the cost,” he adds, referring to investments in healthcare and infrastructure.

It’s game on, though, for the Gates Foundation. And for the United Nations too, which has launched the Sustainable Energy for All that has a lofty goal of providing universal energy access by 2030. It also aims to double the use of both energy efficiency and renewable energy during the same time period.

Most of those without electricity are in Asia and sub-Saharan Africa, where power generation is about a tenth of where it is in other developing areas. Other regions without power include swaths of Latin America and the Philippines. Despite the noble efforts and based on current population trends, 1.2 billion — or 15% of the world’s population — will still lack access to electric power in 2030.

Separately, Gates has established the Breakthrough Energy Venture, which is a $1 billion fund with a long-term focus. It has a lofty goal of reducing greenhouse gas emissions by a half-gigaton a year.

One of the aims of that energy fund is to invest in promising technologies. Energy storage is an obvious and tangible solution. Nuclear fission and fusion are two of the more distant aspirations. In fact, nuclear energy is becoming a central focus of Gates — a fuel that he says is ideal for dealing with climate change because it is carbon-free, scalable and always available.

“We are looking at all the major drivers of climate change,” Gates says, in his blog. “The companies we chose are run by brilliant people and show a lot of promise for taking innovative clean-energy ideas out of the lab and getting them to market.”

Gates is pushing for a holistic approach to achieving near-zero emissions. In other words, the electricity sector is one facet. But agricultural, manufacturing, transportation and buildings are other aspects. The generation of electricity accounts for a quarter of those heat-trapping releases, according to the Intergovernmental Panel on Climate Change. But the manufacturing industry makes up 21% while agriculture comprises 24%, transportation makes up 14% and buildings account for 6%.

Solving the climate issue requires financing to get the technologies to the developing world — a key factor that has stalled progress when it comes to global warming talks. Both Bill and Melinda are vociferous in their quest to bring such prosperity to Africa, emphasizing that if the continent can electrify and subsequently flourish, the whole world will benefit.

How does this jibe with the U.S. president’s thinking? Donald Trump is an isolationist, saying that the country needs to focus on its problems and that its resources should be reserved for its people. But thankfully, members of the president’s own party have persuaded him that investments — foreign aid — distributed around the world has a huge payback.

And Bill Gates is among those who think that the United States could be doing more. Already the country is providing $7 billion under The United States Power Africa initiative that began in 2013. Most of that is getting used to construct transmission lines and power generation.

Gates explained to reporters earlier that Trump’s hot buttons are creating profits and jobs. Reducing emissions is not really on his radar unless there is money to be made. But the two concepts are irrevocably linked. The key now is to think of Africa as a growth opportunity where capital allocated to agribusiness, infrastructure, pharmaceuticals, technology, manufacturing and energy will produce positive economic and environmental results.

The potential is enormous. And the markets know it. The focus, though, is on the “triple bottom line,” or on improving the plight of the planet and the people while also increasing profits. Such companies as Cisco Systems, DowDupont Inc., Johnson & Johnson, Siemens AG and Unilever are championing the cause and underscoring their commitment to an ecological balance. All of those companies are doing business in Africa.

What Africa can learn from Kenya's robust energy policies.

Powering up the ‘last mile’ in renewable energy rollout in Africa.