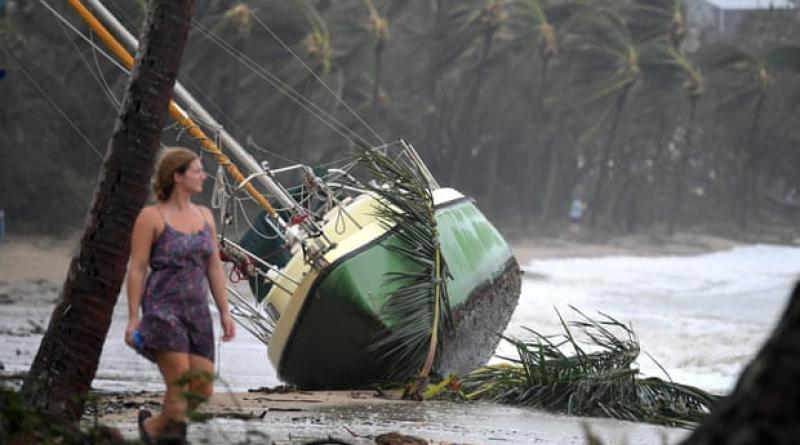 The government opts for conflict rather than change, while suppressing details on the implications of its climate inaction

The top priority of government is security of the people. Yet on the greatest threat of all, most governments are failing abysmally.

As the global influence of western democracies wanes with the ascendancy of China, India and other emerging countries, the resulting power struggle is diverting attention from the great issues the world faces, to their symptoms.

The neoliberal market economy, with its unregulated consumption and rapacious short-term outlook, is destroying modern civilisation. The warning signs are obvious, not least burgeoning high-consuming populations, massive biodiversity loss and multiple resource scarcities. Yet rather than reform an unsustainable system, political leaders scramble to prop it up and compound the problem. The result is Brexit, Trump’s Mexican wall, escalating Middle East tension, the US-China trade standoff, a global arms and space race, Amazon deforestation and much more.

In their quest for power, leaders – both democratic and authoritarian – ignore the one issue that is inexorably changing that system, namely human-induced climate change. This is an existential threat to human civilisation that will render current political priorities irrelevant as climatic consequences move beyond human influence.

Countering this threat requires unprecedented global co-operation to initiate emergency action. Yet leaders opt for conflict, while suppressing information on the implications of their climate inaction.

In May, we published a short paper that included a simple 3C global warming scenario for 2050, outlining the hard-nosed practical impact of climate change, as opposed to more theoretical scientific and business risk disclosure situations. This information was not new, but prompted extensive global discussion: some considered the situation entirely credible, others felt it too extreme. What became clear was the thirst for practical information of this kind.

In response, we recently published a follow-up analysis: “The Third Degree: Evidence and implications for Australia of climate-related security risk”, detailing the basis for our assumptions on issues such as chronic water shortages, coastal inundation, mass migration and extreme heat – plus an in-depth global 3C scenario originally published by US national security experts in 2007.

We also propose a major scenario-planning initiative for Australia. Scenario-planning does not forecast, predict or express preferences for the future; rather it is storytelling, painting pictures of alternative worlds that might emerge, to assist policymakers in imagining and thinking about future possibilities. Strategy is then assessed against each possible future.

One of the initial tasks is to identify the “official future” – the future as it is supposed to be, upon which prevailing strategy is based. A large amount of political capital is tied up in that view, typically the result of group-think generated by ideology or by business models that have stood the test of time but may be inappropriate in the future.

Scenario-planning explores the future, allowing constructive discussion on alternatives incorporating the full range of credible evidence. In particular, there must be a preparedness to think beyond conventional wisdom, after which a reassessment of the official future is often inevitable, and proactively undertaken.

Nowhere is this more necessary than in Australia, the continent most exposed to climate change, where the official future for the last two decades has been, and remains, climate denial and delay.

Political expediency, blinkered ideology and short-term business thinking rejects or deflects climate science and expert advice. Predatory delay is used to prolong the life of our high-carbon economy for short-term financial gain, irrespective of the damage to society. Policy, such as it is, views climate change as a non-problem.

The blatant inconsistency of Australia’s position beggars belief. We are signatories to the UNFCCC, supposedly committed to avoiding dangerous climate change, which is already happening. Australia ratified the Paris agreement to restrict temperature increase below 2C and ideally towards 1.5C, yet our emissions are rising rapidly even though there is no carbon budget remaining to stay below even 2C. Incredibly, we ramp up new fossil fuel projects: Adani coal, gas expansion, fracking in NT and WA, and more. Then we have the gall to carry over unused carbon credits from the Kyoto protocol to obscure the failure of our wholly inadequate Paris emission reduction commitments; credits which were unjustified in the first place.

We are already the fifth largest carbon polluter globally when exports are included – about 5% of global emissions. On current projections, by 2030 Australia will be responsible for a massive 13% of global emissions. Our fossil fuel industries are subsidised annually by about US$29bn or 2.3% of GDP, far in excess of anything given to the low carbon industries.

And this in a country with probably the greatest low-carbon energy potential in the world – potential we are wasting, blocked by deliberately obstructive federal policy.

Australia’s climate stance is totally untenable in geopolitical terms, nothing less than a crime against humanity, as Pacific countries continually point out.

The federal government does its utmost to hide these facts from public view. Accordingly, Australia must undertake serious scenario-planning to inform the public of the criminal damage being inflicted upon them by their government, and to develop contingencies for emergency action as the official future of accelerating high-carbon growth inevitably falls apart in the near future.

The government’s role should be to protect the future from the past, not the past from the future. When government refuses to lead, others must.