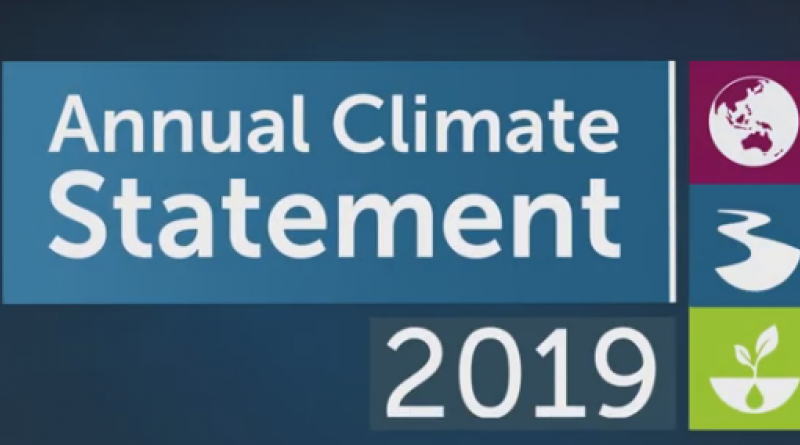 The mean temperature for the 10 years from 2010 to 2019 was the highest on record, at 0.86 °C above average, and 0.31 °C warmer than the 10 years 2000–2009. All the years since 2013 have been amongst the ten warmest on record for Australia. Of the ten warmest years, only one (1998) occurred before 2005. Warming associated with anthropogenic climate change has seen Australian annual mean temperatures increase by over one degree since 1910. Most of this warming has occurred since 1950.

2019 was also the driest year on record for Australia at 277.6 mm, well below the previous record in 1902 (previous lowest was 314.5 mm). Nationally-averaged rainfall for 2019 was 40% below the 1961–1990 average of 465.2 mm. The national rainfall dataset commences in 1900. Although every period of rainfall deficiency is different, the extraordinarily low rainfall experienced this year has been comparable to that seen in the driest periods in Australia's recorded history, including the Federation Drought and the Millenium Drought.

Annual mean temperatures for 2019 were above average for nearly all of Australia, and highest on record for a large area of northern and eastern New South Wales, southeast Queensland, most of Western Australia extending from the Pilbara coast to northwest South Australia, and for an area of the Victoria River District in the Northern Territory. It was the warmest year on record for New South Wales and Western Australia as a whole, and amongst the ten warmest years for the Northern Territory, Queensland, Victoria, and South Australia.

Rainfall for the year was below to very much below average over most of Australia. Much of northeastern New South Wales and southeastern Queensland, pastoral South Australia, the central and southern Northern Territory, and southeastern Western Australia received their lowest annual totals on record. Annual rainfall was above average across parts of Queensland's northwest and northern tropics, mostly as a result of very much above average rainfall during the first quarter of the year.

The second half of the year was particularly dry across most of the southern half of Australia, and followed several years of below average rainfall over parts of Queensland and New South Wales. Warm and windy conditions during spring to early summer led to repeated periods of severe fire weather, with very large bushfires affecting eastern Australia from September, with many fires continuing to burn after the end of the year.

All capital cities were warmer and drier than average in 2019.

Daytime temperatures were especially warm, with Sydney, Canberra, Brisbane, and Hobart all observing their highest annual mean maximum temperature on record. Perth was equal-warmest and Darwin the second-warmest. While not in the top ten, Melbourne also had warmer than average days.

Rainfall was below average in all the capital cities. Each city, except Sydney, had rainfall totals in the driest 10% of years. Sydney had many months with below-average rainfall, but also some wet months; its annual total rainfall was in the driest 15% of years. Darwin had its seventh-driest wet season over 2018–19, and a late start to the 2019–20 wet season.

Australia fires and weather: blazes out of control as heatwave expected to peak on New Year's Eve