Australia was the first casualty of the big blackout lie blaming wind power – the US could be next.

Climate change is full of surprises. We were warned about heatwaves, hurricanes and high-intensity firestorms. What we didn’t see coming was a cynical, cyclical economy of blackout bullshit. As climate impacts intensify, power grids stuffed with ageing fossil fuel infrastructure crumble. Those blackouts are usually blamed on wind and solar – and used to extend the lifespan of existing fossil fuel generators. Opportunity costs increase, climate impacts worsen and blackouts intensify. It’s an accelerating death spiral.

Last week Texas suffered an outage likely to be the worst on record in the US. Millions of people were without power for days, initially at a scale roughly equivalent to all of eastern Australia going dark at once. A burst of winter weather froze vital components at power stations, gas supplies were limited by frozen pipelines and, consequently, a third of the state’s thermal power stations were offline (mostly gas). An unspecified proportion of wind turbines were disabled due to icing and low-temperature shutoffs, but “gas and coal were actually the biggest culprits in the crisis”, Eric Fell, director of North America gas at Wood Mackenzie, told Bloomberg.

Regardless, windfarms copped the blame. “Icy weather chills Texas wind energy as deep freeze grips much of US,” was one Reuters headline. “Frozen Turbines and Surging Demand Prompt Rolling Blackouts in Texas,” wrote the New York Times. “The windmills froze, so the power grid failed,” said Tucker Carlson of Fox News. Fox blamed renewables for the blackouts 128 times over two days. The Texas governor, Greg Abbott, said: “This shows how the Green New Deal would be a deadly deal.” He was joined by the Republicans Ted Cruz, Dan Crenshaw and Lauren Boebert, each seizing on the crisis to attack renewables (most of them on the receiving end of eye-watering sums from fossil industry).

The narrative was confused. An image of a helicopter de-icing a wind turbine (taken from a 2015 test in Sweden) was falsely presented as if it were in Texas. They were simultaneously frozen but also freed by helicopters (how ironic!). The details didn’t matter; the goal was filling the initial information vacuum with narrative-setting imagery and words.

It was a note-for-note repeat of the 2016 blackout in South Australia, in which the entire state’s power supply was knocked out during a freak storm. The event was immediately blamed on wind power by conservative politicians and media. Though wind’s role in the sequence of events related to an immediately rectified software setting, it was presented as proof the technology would bring darkness to Australia, as I wrote in my book digging into the technical, cultural and political detail of that pivotal moment.

Since then, South Australia’s renewable energy growth has slowly but surely continued. Clean energy has gone from 40% to 60% of generation, and the remaining gas fleet is shrinking. And Australia’s market operator has published scenarios examining how the state could grow to about 90% without any impact on reliability: 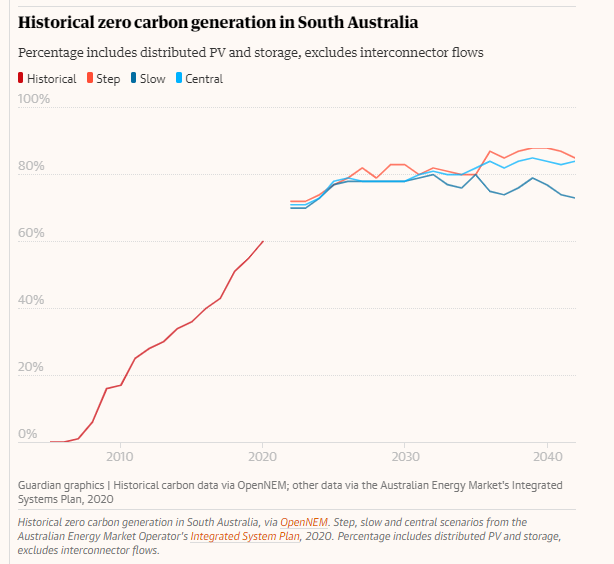 These strides are impressive but at a national level far too slow to hit grid emissions reductions aligned with a 1.5C target – essentially, near-zero emissions electric power by about 2030. That goal requires coal and gas plants shutting down well before their scheduled retirement age; a conversation still plagued by blackout scaremongering. Meanwhile, Australia’s coal and gas plants are failing catastrophically during increasingly intense heatwaves. 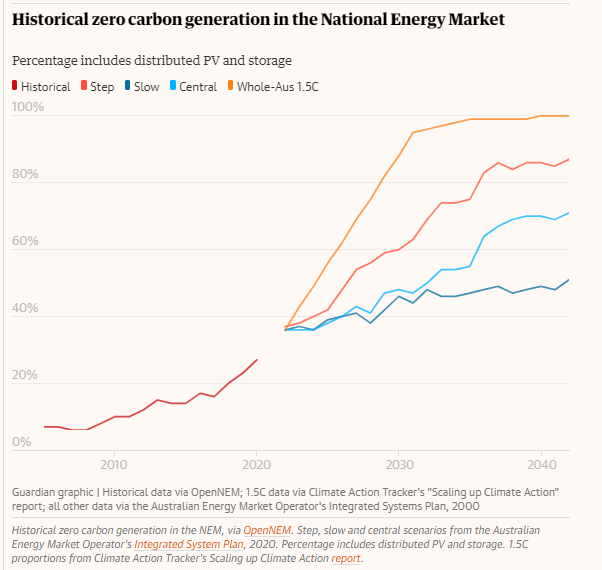 Even the prospect of the next coal plant closing on time was opposed on the grounds that it would bring South Australia-style blackouts. Australia’s prime minister threatened to build a 1,000MW gas-fired power station using public money as a sort of punishment for a perceived lack of firm power, despite the grid operator’s own forecasts confirming that new renewables would more than offset the plant’s shutdown. Though Australia’s renewable industry is making strides, investment is slowing. Unless the baggage of 2016 is shaken off, decarbonisation will be rate-limited.

The era of blackout bullshit is a pincer movement of worsening climate impacts on one side and ageing fossil infrastructure on the other, with pro-fossil misinformation firestorms burning through algorithmically intensified conservative media and social networks. The intensifiers of climate impacts, such as grids crumbling under deregulation and free market ideology, do not get the prominence they deserve. The technical details of integrating wind and solar are ignored. It is a wall of exhausting, unstoppable noise.

The US renewable sector, the backbone of Biden’s 2035 100% clean electricity plan, could end up struggling up an already-steep hill hit by frequent and aggressive blackout bullshit campaigns. “We can’t have another Texas” will be the catchcry. Malcolm Turnbull’s “Blackout Bill [Shorten]” could end up repurposed for Biden.

It can be avoided. The benefits of renewable energy must be spread far more broadly, through programs such as community ownership and investment. Climate jobs must be real, rich and diversified. Deeper efforts to fight misinformation, including from traditional media outlets, must be made. And climate resilience must be baked into every plan to transition. Decarbonisation must go faster, and it can, with a full awareness of the threat of a fossil fuel death spiral.

How the Texas electricity system produced low-cost power but left residents out in the cold.