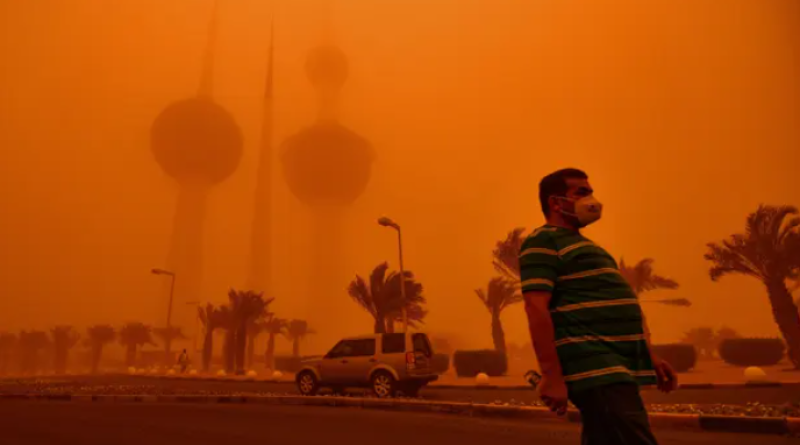 Blankets of thick gritty haze and ominous orange skies since early April have sent thousands to hospitals and resulted in at least four deaths in Iraq and in Syria.

The apocalyptic scenes have affected everyone. Hospitals in Syria have been on standby for residents unable to breathe. Iraq forced schools and offices to close in some provinces, and on 16 May declared a state of emergency. In the Gulf states, flights were halted in Kuwait, and both Saudi Arabia and the United Arab Emirates issued dust storm alerts.

Dust and sand storms are an atmospheric phenomenon, representing one of the most severe, if underrated, natural hazards in dry regions. In the Middle East, they frequently cover arid and semi-arid land, typically in late spring and summer. This year has been especially severe, experts say. They have come far earlier than normal, and are spreading across a much wider area.

“It is very concerning. Dust storms do not just impact one country or specific location in the world and can have far-reaching consequences globally,” said Muge Akpinar-Elci, dean of the school of public health at the University of Nevada.

Dust particles can travel thousands of kilometres. All that is needed to trigger a storm is wind, a source of dust where there is little to no vegetation, and dry conditions. One of the most common routes in the region is when strong north-westerly winds, known as shamal, push cold air through the dry and sandy soil areas of Iraq, picking up dust between the Tigris and Euphrates rivers, and carrying it along to the Arabian peninsula. This year, the storms stretched to Saudi Arabia over other Gulf states, as well as cloaking parts of Jordan.

Northern Iraq has been particularly exposed, witnessing a sandstorm nearly every week since March. In May, Issa al-Fayyad, the director general of the technical department for the Ministry of Environment, said the country faced an average of 272 dust storms a year. He predicts that it will grow to 300 days of dust a year by 2050, and warns that climate change is the key factor in the increase.

Mohammed Mahmoud, the director of the climate and water programme at the Middle East Institute, warns, similarly, that the once rare occurrence will only be more frequent as the climate crisis increases aridity and warms the already dry region, while altering weather patterns to create more storms.

“Just look to the sky. If the visual of dark orange apocalyptic skies isn’t enough, it’s the net impact of these multiple dust storms happening in rapid order,” he said.

Riyadh, the capital of Saudi Arabia, has been in dust storms for more than 35 days in the first four months of 2022, while the highest number of days with dust storms in the past four years was 48 days in 2019, according to the Royal Commission for Riyadh City.

For Manna Alwadei at the department of environmental health at the Imam Abdulrahman Bin Faisal University in Saudi Arabia, “this year could be one of the worst for Saudi Arabia, as they occur more frequently than before”.

The consequences are relentless. Alwadei’s own father was hospitalised due to asthma exacerbated by the storms. Impacts range from respiratory illness to reducing crop yields to lowering property values to steering foreign workers away from polluted places. According to the United Nations, dust storms cost the region’s economy $13bn (£10.3bn) a year.

Given that storms can carry harmful pollutants, exposure to sandstorms can cause a myriad of health problems. A series of storms in May sent at least 5,000 people in Iraq to the hospital with breathing issues, and led to the death of one, the health ministry spokesperson Seif al-Badr said. Three others had died in the eastern Syrian province of Deir ez-Zor, the Associated Press reported.

“The impact of dust storms exceeds regional and continental boundaries,” said Akpinar. “So this is not somebody else’s problem, this is everyone’s problem.”