Antarctica's Denman Glacier is sinking into the world's deepest canyon. 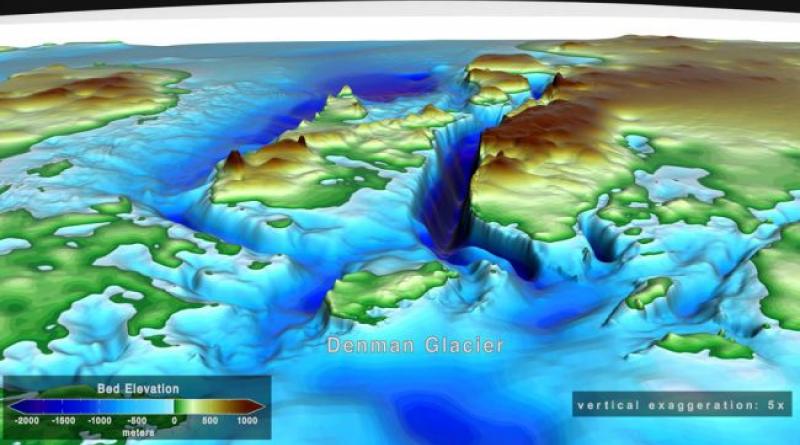 The glaciers of Antarctica are melting at unprecedented rates, and a giant canyon in the continent's rocky underbelly could make matters much worse.

In a study published March 23 in the journal Geophysical Research Letters, researchers used more than 20 years of satellite data to monitor the ice in Denman Glacier — a 12-mile wide (20 kilometers) stream of ice in East Antarctica — along with the bedrock beneath it. The researchers found that, not only did Denman's western flank retreat nearly 3 miles (5 km) between 1996 and 2018, but that a deep canyon below the glacier may be causing the glacier to melt faster than it can possibly recover.

Denman Glacier's western flank flows over the deepest known land canyon on Earth, plunging at least 11,000 feet (3,500 meters) below sea level. Right now, that canyon (known as the Denman trough) is mostly cut off from the sea thanks to all the glacial ice piled inside and atop the ravine. However, as the glacier's edge continues to retreat farther and farther down the slope, warm ocean water will pour into the canyon, battering bigger and bigger sections of the glacier and gradually turning the Denman trough into a giant bowl of meltwater with nowhere else to go.

This scenario, the researchers wrote, could kick off a runaway feedback loop of melt that ultimately returns all of Denman Glacier's ice to the sea — risking nearly 5 feet (1.5 m) of global sea level rise.

"Because of the shape of the ground beneath Denman's western side, there is potential for rapid and irreversible retreat, and that means substantial increases in global sea levels in the future," lead study author Virginia Brancato, a postdoctoral fellow with NASA's Jet Propulsion Laboratory, said in a statement. 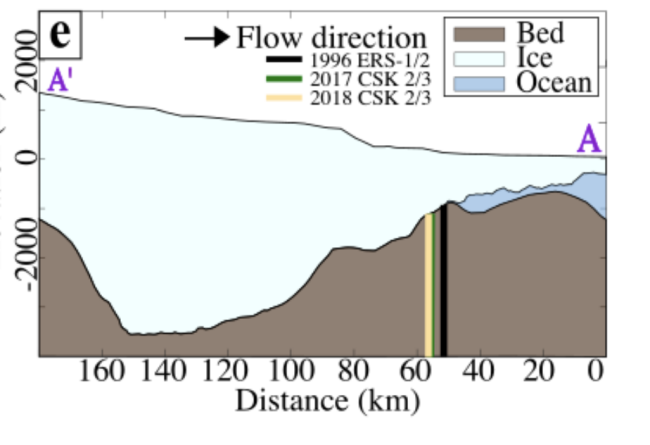 Glaciers are giant slabs of ice sitting atop continental bedrock. Most glaciers in Antarctica, including Denman, end in large ice shelves or "tongues" that jut away from the land and into the open ocean, where their edges slowly snap into pieces and form new icebergs. The point where a glacier first leaves the bedrock and begins to float in the water is called the grounding line. The location of this line is key to a glacier's stability; when warm ocean water melts away exposed glacial ice, the grounding line retreats farther and farther back, making nearby ice sheets less stable and more prone to melting and cracking.

In the new study, researchers used satellite data from the German Aerospace Center and the Italian Space Agency to measure how far Denman Glacier's grounding line retreated in the 22 years between 1996 and 2018, and how much mass the glacier lost in melted ice. They saw extensive melting — Denman lost more than 268 billion tons (2.43 metric tons) of ice in those two decades — and an alarming rate of retreat on one side of the glacier only.

While there was little retreat on Denman's eastern flank (where a rocky ridge stabilizes the grounding line), the glacier's western flank shot back by nearly 3 miles (5 km), plunging partway down the slope of the massive Denman trough.

If current global warming trends continue, that trough could spell doom for Denman glacier, the researchers wrote. As the glacier's grounding line continues to sink farther down the canyon (which already sits below sea level), warm ocean water will batter larger and larger chunks of the glacier's edge, causing it to melt even faster and make the precarious ice shelf above even more vulnerable to collapse.

If that happens, it's likely that Denman Glacier will undergo a "rapid and irreversible retreat" with "major consequences" for sea level rise, the researchers wrote in the study. This possibility should be a wake-up call to scientists who previously considered melt in East Antarctica a relatively benign threat compared to the rapidly melting Pine Island and Thwaites glaciers in West Antarctica, the authors concluded.

"The ice in West Antarctica has been melting faster in recent years, but the sheer size of Denman Glacier means that its potential impact on long-term sea level rise is just as significant," study co-author Eric Rignot, a professor of Earth system science at the University of California, Irvine, said in the statement.