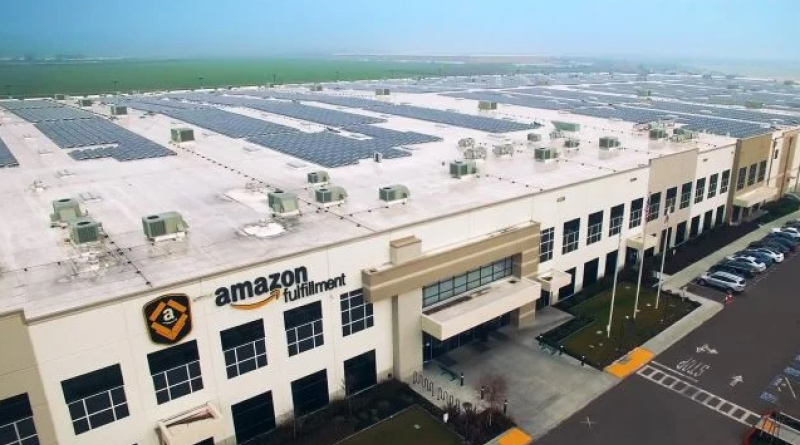 Amazon has added 3.4 gigawatts of new renewable power to its portfolio, taking its total capacity to 6.5 GW.

The company claims that it has now overtaken Google as the largest corporate user of renewables. Amazon's new wind and solar projects are distributed globally from Australia and South Africa to Sweden and the U.K.

The retail giant is aiming to power all its operations, from its offices and fulfillment centers to the data centers of its Amazon Web Services business, with renewables by 2030. It claims to be on track to hit that milestone by 2025, and it wants to hit the target of being net-zero carbon by 2040.

“Amazon is helping fight climate change by moving quickly to power our businesses with renewable energy,” Jeff Bezos, Amazon founder and CEO, said in a statement. “With a total of 127 solar and wind projects, Amazon is now the biggest corporate buyer of renewable energy ever."

Amazon’s renewable energy investments are a mixture of power-purchase agreements (PPAs), new-build utility-scale projects, on-site installations and participation in renewable certificate and guarantee programs. Amazon maps its renewable projects but does not discern between PPAs and newly added capacity.

While Amazon says its roster of renewables sets a new corporate record, Google is planning to shift to 24/7 real-time matching of renewables. That could be argued to have a greater overall impact compared to PPAs and buying up certificates of origin.

One of the new Amazon deals is a 10-year PPA with Ørsted for 250 megawatts of the planned 900 MW Borkum Riffgrund 3 offshore wind farm in Germany, the largest offshore wind corporate PPA in Europe. The project is expected to be operational by 2025.

“This agreement shows that Ørsted is well placed to help corporations with green ambitions act on the global climate challenge,” Rasmus Errboe, the senior vice president and head of region for continental Europe at Ørsted offshore who is responsible for corporate PPAs, said in a statement.

“The [corporate] PPA with Amazon on Borkum Riffgrund 3 will drive this breakthrough zero-subsidy project a step closer toward realization, where it will supply large amounts of clean electricity for Germany’s green transition,” he added.

Corporate procurement is still a fairly new endeavor for the relatively young offshore wind sector. The largest deal is Ørsted's 920 MW deal with Taiwanese chip-maker TSMC. It was the Danish offshore wind leader's fourth corporate deal; the prior three totaled 154 MW. The TSMC deal is also the largest-ever corporate PPA for a single project.

French utility Engie has revealed that it is also providing 650 MW of power to Amazon via new PPAs. The vast majority of the wind and solar projects are in the U.S., with commercial operations beginning in 2021 and 2022.

Oil major BP is providing 404 MW from three onshore wind projects, one in Sweden and two in Scotland.

Climate Pledge initiative grows as Microsoft and Unilever join up

In separate news on Wednesday, a host of new companies joined the Climate Pledge, which was co-founded by Amazon. The initiative commits members to hitting the net-zero target 10 years ahead of the Paris Agreement’s 2050 deadline to limit climate change to 1.5 degrees Celsius of warming.

Unilever, Microsoft, Coca-Cola and oil refiner Neste are among the 13 new signatories.

Microsoft announces plans to be carbon negative by 2030.