‘All I can think about is the children’s future’: drought devastates Kenya 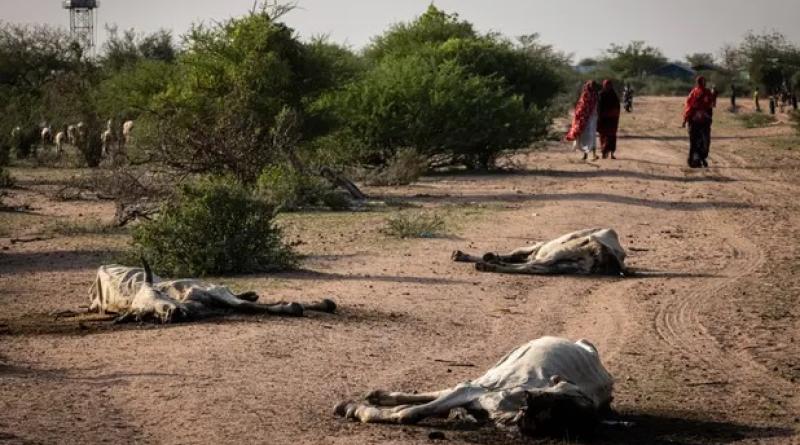 Dahabley smells of rotting flesh. Bodies of starved cows lie in various stages of decomposition, after being dragged to the outskirts of the village in Wajir county, north-east Kenya. They are added to on a near-daily basis and fester in the heat amid multiplying flies.

North-east Kenya is well used to spells of drought, but it is experiencing the worst in living memory. As the region’s short rainy season, which starts in October, draws to an end, parts of Wajir have only seen small showers and other areas have had no rain at all for more than a year.

In October, the Intergovernmental Authority on Development (IGAD), a regional trade bloc, and the UN’s Food and Agriculture Organization warned that 26 million people were struggling for food after consecutive seasons of poor rainfall in the Horn of Africa.

Wild animals are dying and herders are reporting losses of up to 70% of their livestock. With conflicts raging in Ethiopia and Somalia, aid agencies are struggling to assess the extent of the crisis. Now, as the next four-month-long dry season starts, there are mounting fears that large numbers of people will die.

In a round hut of woven sticks in Dahabley, Hodhan Issack, 22, is increasingly concerned about the health of her seven children. “I overthink things, and honestly, I think I’m going mad sometimes,” she says. “All I can think about is the children’s future.”

Her husband left to find work months ago. He occasionally sends money, but poor phone reception means they rarely speak. All 10 of their cows have died, and the three goats she has left from a herd of 50 are very weak and are surviving on the children’s leftover rice and maize.

Without making money from livestock, Issack can no longer afford monthly 500 Kenyan shilling (£3.30) school fees for her eldest two and they have not attended classes for a month. Her two youngest have thin hair and are visibly malnourished. Issack says she is struggling to cope. Mohamed Abdi, teacher at Dahabley primary school, says there are only 60 pupils left out of 120 as families have left in search of pasture.

Animals are central to the way of life of nomadic communities across the vast semi-desert plains of northern and eastern Kenya. A healthy cow is worth about $300, a goat $50 and a camel $1,000. Livestock act as both a bank account and a key source of food. The cows still alive in Dahabley are increasingly weak, sitting emaciated in the shade of gnarled trees around the village, with their value decreasing by the day.

Kusow Mohamed, 52, says that of his herd of 30 camels, 10 have died and the rest are thin, their fatty humps all but gone. Yet camels are one of the most climate-resilient mammals. “It’s unheard of,” says Mohamed, “we have never known them to die like this. Now we can’t afford to buy diesel to pump water from the village borehole.”

East of Dahabley in Eyrib, in Sabuli wildlife conservancy, small businesses and homes are boarded up and more than 70% of the residents have left, according to the assistant village chief, Abdi Karim. “We haven’t had any rain here in 24 months. Some people have lost everything and have migrated to the cities.”

River water has not flowed into the reservoir for at least eight months and people have been reduced to drinking salty water from boreholes. Wildlife is dying. In November, 10 giraffes, weak from lack of food and water, died after getting stuck in thick mud as they tried to reach a puddle of water in the middle of the reservoir. Their bodies were dragged out to prevent contamination of the reservoir and six left together are pecked at by birds as they lie on the outskirts of the village.

“We have lost 102 reticulated Somali giraffes in Wajir, Garissa and Mandera over the last three months,” says Sharmake Mohamed, chair of the North Eastern Conservancies Association.

Warthogs, oryx and ostriches have also been dying of thirst in the Sabuli wildlife conservancy. The region has also lost 30 hirola, also known as Hunter’s antelope, a critically endangered species.

“That’s 6% of the total that were left in the wild,” says Mohamed. The drought is pushing wildlife, humans and livestock to compete for water and vegetation in areas that have seen small amounts of rain, creating human-wildlife conflict, where lions and cheetahs have been preying on livestock. The giraffes were trying to drink from the water source meant for the community, which created tension, Mohamed says.

“Drought has become very frequent over the last 10 years. We could attribute it to climate change,” says Jully Ouma, disaster risk adviser for the IGAD Climate Prediction and Application Centre.

The rainfall cycle is being disrupted by rising temperatures. Ouma says the extra heat “causes a pressure system that redirects movement of winds … so moisture can be taken to areas where it used not to go”. This can lead to a drought cycle in some areas and flooding in others.

The communities suffering from drought in east Africa are among those who do the least harm to the environment, but whose lives are the most severely affected by the climate crisis.

Muhumed Noor is chairman of Dujis village in Garissa, Wajir’s neighbouring county. He points to the skeletal remains of cows that died a month ago. Nearly three-quarters of the villagers’ cattle have died.

Three water trucks are parked in the middle of Dujis. “They are waiting for money,” says Noor. The community has had to resort to buying water, at 45,000 Kenyan shillings (£300) for 10,000 litres.

“We need three [trucks] a week for the 350 households in Dujis,” says Noor. But with no healthy livestock to sell, the community is struggling to pay the drivers, who refuse to leave without payment. “They will not go until they have got their money. They give us a timeframe – a week, a month. If we fail to pay there could be violence,” he says.

“The rains have stopped now, so there is no hope of any other rain unless a miracle happens,” says Yusuf Abdi Gedi, Wajir’s local official for livestock and agriculture. The Wajir county administration is struggling to cope with the scale of the emergency and has hired 40 extra trucks on top of 18 of their own to distribute water. However, community leaders in Dahabley and Eyrib say they have not received government aid. “We have about 400 villages and we were not able to reach all of them,” says Abdi Gedi.

The authority’s efforts have been hamstrung by a lack of funds and it is now redirecting money from other projects to deal with the crisis. The actions of Mohamed Abdi, the former Wajir county governor impeached in April amid allegations of corruption, is said to have exacerbated the problem. “Systems were not in place and there was not enough resilience-building done prior to the drought so what we are doing is only fire fighting,” says Abdi Gedi.

Abdi Gedi says Wajir has not received any extra funds from the national government since the president, Uhuru Kenyatta, declared a national disaster in September. That was supposed to “trigger support from the international community,” he says, adding that it had not happened to the extent needed.

Walking past the carcass of a dead oryx at the dried-up reservoir on the outskirts of Eyrib, Abdi Karim and his fellow teacher Abdikadir Aden say the chief of Eyrib is in Wajir asking the county government to send water.

‘We run from men only to meet crocodiles’: Kenya’s drought is deadly for women