"Addressing climate-related security risks to international peace and security through mitigation and resilience building." - Secretary-General's remarks to the Security Council 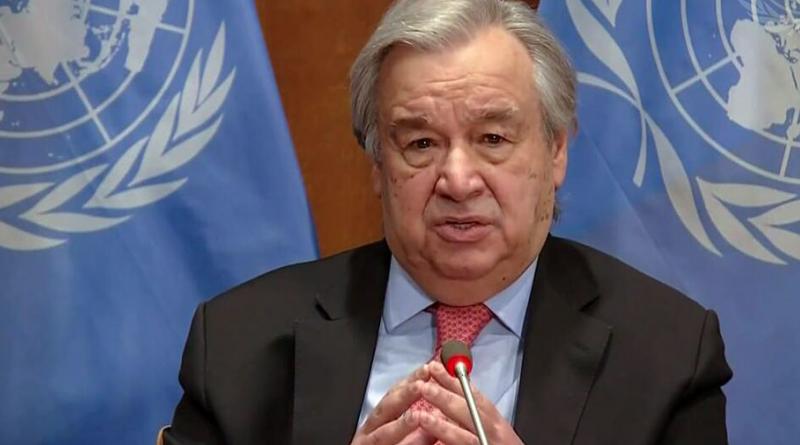 [Watch the video on webtv.un.org]

I thank the British Presidency for convening this debate, and for your invitation to brief on a subject of grave concern.

The climate emergency is the defining issue of our time.

The last decade was the hottest in human history. Carbon dioxide levels are at record highs, and wildfires, cyclones, floods, and droughts are the new normal. These shocks not only damage the environment on which we depend; they also weaken our political, economic and social systems.

The science is clear: we need to limit the global temperature increase to 1.5 degrees Celsius by the end of the century.

And our duty is even clearer: we need to protect the people and communities that are being hit by climate disruption.

We must step up preparations for the escalating implications of the climate crisis for international peace and security.

Climate disruption is a crisis amplifier and multiplier.

Where climate change dries up rivers, reduces harvests, destroys critical infrastructure, and displaces communities, it exacerbates the risks of instability and conflict.

A study by the Stockholm International Peace Research Institute found that eight of the ten countries hosting the largest multilateral peace operations in 2018 were in areas highly exposed to climate change.

The impacts of this crisis are greatest where fragility and conflicts have weakened coping mechanisms; where people depend on natural capital like forests and fish stocks for their livelihoods; and where women – who bear the greatest burden of the climate emergency – do not enjoy equal rights.

In Afghanistan, for example, where 40 percent of the workforce is engaged in farming, reduced harvests push people into poverty and food insecurity, leaving them susceptible to recruitment by criminal gangs and armed groups.

Across West Africa and the Sahel, more than 50 million people depend on rearing livestock for survival. Changes in grazing patterns have contributed to growing violence and conflict between pastoralists and farmers.

In Darfur, low rainfall and recurrent droughts are increasing food insecurity and competition for resources and we are seeing the result. The consequences are particularly devastating for women and girls, who are forced to walk farther to collect water, putting them at greater risk of sexual and gender-based violence.

Vulnerability to climate risks is also correlated with income inequality.

In other words, the poorest suffer most.

Unless we protect those most exposed and susceptible to climate-related impacts, we can expect them to become even more marginalized, and their grievances to be reinforced.

High levels of inequality, that climate change enhances, can weaken social cohesion and lead to discrimination, scapegoating, rising tensions and unrest, increasing the risk of conflict.

Those who are already being left behind will be left even farther behind.

Climate disruption is already driving displacement across the world.

In some small island nations in the Pacific, entire communities have been forced to relocate, with terrible implications for their livelihoods, culture and heritage.

The forced movement of larger numbers of people around the world will clearly increase the potential for conflict and insecurity beyond their suffering.

When I was High Commissioner for Refugees, I spent time with people who had been uprooted by the impact of climate change, in the Horn of Africa, Darfur, the Sahel and elsewhere.

Listening to their stories, I understood the deep suffering and trauma of families forced to abandon homes and land that had been theirs for generations.

Much more needs to be done to address the specific risks the climate crisis poses to peace and security.

First, we need a greater focus on prevention through strong, ambitious climate action.

We must get the world on track to achieve the goals of the Paris Agreement and avoid climate catastrophe.

We must create a truly global coalition to commit to net-zero emissions by the middle of the century.

And we must mobilize a decade of transformation through a successful COP26 in Glasgow. That requires all Member States to present, well before November, ambitious Nationally Determined Contributions with targets that will allow us to cut global emissions by 45 percent by 2030 from 2010 levels.

We are also asking all companies, cities and financial institutions to prepare concrete and credible decarbonization plans.

We still have a long way to go, and we look to the major emitters to lead by example in the coming months. This is a credibility test of their commitment to people and planet.

It is the only way we will keep the 1.5-degree goal within reach.

We need a breakthrough on adaptation and resilience, which means dramatically raising the level of investments.

All donors and multilateral and national Development Banks must increase the share of adaptation and resilience finance to at least 50 per cent of their climate finance support. And we must make these funds accessible to those on the frontlines of the climate crisis.

Developed countries must keep their pledge of channeling $100 billion annually to the Global South. They have already missed the deadline of 2020.

We need to scale up early warning systems and early action on climate-related crises, from droughts and storms to the emergence of zoonotic diseases.

We also need stronger social protection to support those impacted.

These actions must start now, with transformative policies as we emerge from the pandemic.

Economic and financial systems must incorporate climate risk into financial analysis, so that it is captured in business models and investment decisions.

We must invest in renewable energy and green infrastructure.

In short, we must close the finance gap by increasing support to the countries and communities that are suffering the worst impacts of the climate crisis.

That support must reach women and girls, who bear the brunt of the climate crisis; and constitute eighty percent of those displaced by climate change.

Third, we need to embrace a concept of security that puts people at its centre.

The COVID-19 pandemic has shown the devastation that so-called non-traditional security threats can cause, on a global scale.

Preventing and addressing the poverty, food insecurity and displacement caused by climate disruption contributes to sustaining peace and reducing the risk of conflict.

The Nobel Committee recognized this when it awarded the Nobel Peace Prize to the World Food Programme last year.

Respect for human rights, particularly women’s rights, the rule of law, inclusion and diversity, are fundamental to solving the climate crisis and creating more peaceful and stable societies.

The 2030 Agenda and the Sustainable Development Goals are the global blueprint for action.

Fourth, we need to deepen partnerships across and beyond the United Nations system.

We must leverage and build on the strengths of different stakeholders, including this Council, the Peacebuilding Commission, international financial institutions, regional organizations, civil society, the private sector, academia and others.

As we work to deliver these goals, the United Nations is striving to lead by example by making sure our own operations take full account of the climate crisis.

We are working to ensure that our mediation strategies, analysis and reporting, including to this Council, consistently reflect climate risks.

In South Sudan, for example, an awareness of the impact of climate change helped our peacekeeping operation to mediate a local agreement on cattle management.

We are also reducing the United Nations’ environmental footprint, including through the increased use of renewable energy.

The climate crisis is the multilateral challenge of our age.

It is already impacting every area of human activity.

Solving it requires coordination and cooperation on a scale we have never seen before.

The engagement of all multilateral bodies, including this Council, can play an important role in facing this challenge.

I urge Council members to use their influence during this pivotal year to ensure the success of COP26, and to mobilize others, including international financial institutions and the private sector, to do their part.

Prime Minister Boris Johnson, I guarantee the full support of the United Nations for the British presidency of COP26, together with the Italian co-chairs.

2021 is a make-or-break year for collective action against the climate emergency.

COVID-19 is not a silver lining for the climate, says UN Environment chief.