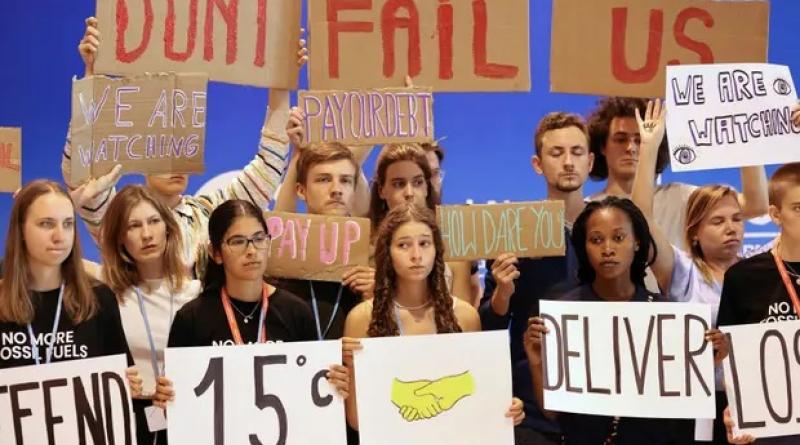 Every fraction of a degree increases human suffering, so the fight to end the fossil fuel industry must ramp up

When the history of the climate crisis is written, in whatever world awaits us, Cop27 will be seen as the moment when the dream of keeping global heating below 1.5C died.

Does that mean giving up? Absolutely not. The 1.5C target is not a threshold beyond which hope also dies. Every fraction of a degree means an increase in human suffering and must therefore be fought for. How? With everything we have, to tear down the barrier between us and climate stability: the fossil fuel industry.

The 1.5C target, beyond which the most disastrous climate impacts lie, is not yet physically impossible to meet. To achieve that, global carbon emissions must be reduced by 50% by 2030, yet record levels of pollution are still being pumped into the atmosphere.

The scientific warnings before Cop27 could not have been louder: we are on the brink of irreversible climate breakdown. Behind closed doors at the summit, however, the fossil fuel states forced other countries to fight tooth and nail merely to preserve the inadequate status quo.

On Friday, a Saudi Arabian delegate said: “We should not target sources of energy; we should focus on emissions. We should not mention fossil fuels.” Despite the efforts of many other countries, the final decision text duly failed to mention phasing out fossil fuels.

It is extraordinary that in 30 years of UN climate negotiations, eliminating the primary cause of global heating has never been mentioned in the decisions. Given that next year’s UN climate summit will be hosted by a petrostate, the United Arab Emirates, it is hard to see how a crackdown on fossil fuels will happen there either.

The world should be sprinting to rid itself of its fossil fuel addiction as if lives depend on it, because they do, but it is jogging on the spot. The 1.5C goal may not yet be physically impossible to achieve, but Cop27 has shown it is politically impossible.

So, what now? It remains imperative to get off coal, oil and gas as rapidly as possible. Every tonne of CO2 that remains in the ground means less harm to lives and livelihoods.

Can the UN climate talks deliver this at speed? It does not look that way. It is too easy for the fossil fuel states to hold the consensus-based negotiations to ransom, threatening to blow up the whole thing if their black gold is so much as mentioned by name. There were more fossil fuel lobbyists at Cop27 than delegates from the Pacific islands, which their industry is pushing below the waves.

Instead, the fossil fuel industry and its unconscionable expansion plans will need to be fought elsewhere. The first place is in the mind. The global oil and gas industry has raked in an average equivalent of $1tn a year in unearned profits for the last 50 years by exploiting a natural resource that belongs to citizens. Imagine redirecting that financial firepower at decarbonising the world.

The fossil fuel industry can also be fought on the streets, in peaceful protest, and on the lands being despoiled by their expansion. Countries could shun petrostates by forming a “climate club”, a G7 proposal to enable the ambitious to race ahead and to penalise the laggards.

A fossil fuel non-proliferation treaty would provide a transparent way to keep remaining coal, oil and gas reserves untouched. Even a tobacco-style ban on fossil fuel advertising, already backed by the World Health Organization, would help. All of this, and more, will be needed.

Cop27 did achieve something. The new loss and damage fund promises to finance the rebuilding of poorer, vulnerable countries hit by increasingly severe climate impacts that they have done little to cause. It is a long overdue acknowledgment of the moral responsibility the big polluters have for the climate emergency. It is all the more important given that Cop27’s failure to meaningfully drive emissions cuts means even worse disasters are to come.

Is there hope? Yes, in that every climate action we take lessens the damage. As Cop27 closed, Kathy Jetn̄il-Kijiner, the poet and climate envoy for the Marshall Islands, said: “I wish we had got fossil fuel phase-out. But we’ve shown with the loss and damage fund that we can do the impossible. So we know we can come back [to Cop] next year and get rid of fossil fuels once and for all.”

I hope she is right. I fear she is wrong.

Do not use Ukraine war to defer climate goals, warns Mark Carney