What causes the seasons? 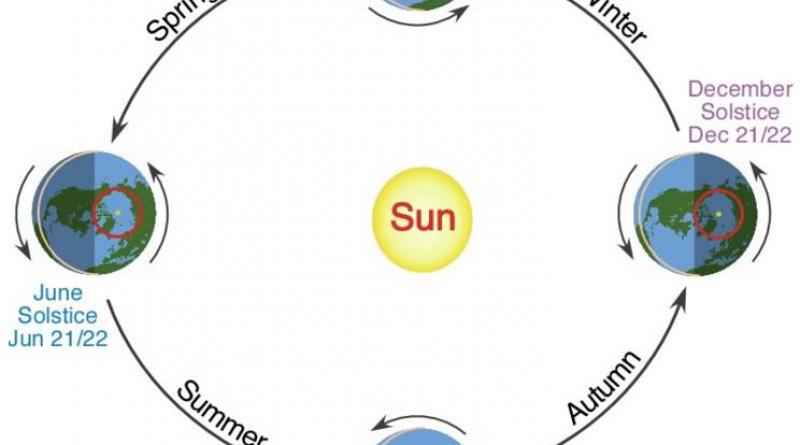 Many people believe that the reason why there’s spring, summer, autumn, and winter is due to our planet’s proximity to the sun. According to this intuitive (but flawed) line of reasoning, Earth is closest to the sun during the summer and farthest away at winter. But, while the Earth indeed follows an elliptical orbit around the sun, the reality is that in the Northern Hemisphere, the coldest time of the year coincides with perihelion — when Earth is closest to the sun — while the hottest time of the year is around aphelion — when Earth is farthest away from the sun.

It’s all in the tilt

The real reason why we have seasons is due to Earth’s axial tilt. Every 23 hours and 56 minutes, Earth spins once on its axis — however, it is not perfectly upright with respect to its orbit around the sun but rather it is tilted at an angle of around 23.5°, always pointed towards the North Star, Polaris. Astronomers believe that this is due to a massive collision between early Earth and ‘planetesimals’ which coalesced to form our planet as we know it — but in the process knocked it off its natural perpendicular orientation. This impact is thought to have also lead to the formation of the Moon. Uranus, which has a much greater axial tilt, may have experienced a series of such dramatic collisions.

This obliquity stays fairly constant, although it’s known to slightly fluctuate over thousands of years as a result of the gravitational influence of the sun, the moon, and the other planets, but also things such as shifts in mass due to the melting of glaciers and ice sheets.

It’s this axial tilt that is responsible for how much sunlight reaches a given point on the planet’s surface over the course of a full orbit around the sun, causing big differences in temperature at various points around the globe. When the North Pole is pointing toward the sun, the northern hemisphere experiences summer while the southern hemisphere experiences winter. The situation is reversed six months later when the South Pole is pointed towards the Sun.

The summer solstice starts on the first day of summer — June 21 in the Northern Hemisphere. The length of time between sunrise and sunset is the longest of the year.

The winter solstice starts on the first day of winter — December 22 in the Northern Hemisphere. The time between sunrise and sunset is the shortest of the year.

Winter and summer solstices are reversed in the southern hemisphere.

The spring equinox is the first day of spring — March 20 in the northern hemisphere. During this time the sun is crossing the equator northward. It signals a long period of sunlight at the North Pole.

The autumn equinox is the first day of autumn — September 22 in the northern hemisphere. The sun is crossing the equator moving southward.

Spring and autumn equinoxes are reversed in the southern hemisphere.

The axial tilt around which Earth revolves is also responsible for solar diurnal cycles, governing how long a day and night last. In the summer, the sun climbs higher in the sky and the day lasts longer while in winter, days become shorter and the sun is lower in the sky. What’s more, in the northern hemisphere, the sun rises north of true east during the summer solstice and sets north of true west — the reverse is true during the winter (the sun rises in the southeast and sets in the southwest. At the equinoxes it rises due east and sets due west. And the further north you go, the more northerly the rising and setting points get — and vice versa in the southern hemisphere.

At the poles, things get really extreme. For instance, at the north pole during the winter solstice, there is absolutely no light, not even twilight. And this goes on for months, until first dawn in early March. Throughout the entire summer, the north pole is completely covered in sunlight all day long — it’s the reason why the Arctic is called the land of the “Midnight Sun”. As a fun fact, in May, when the day isn’t very long but the sun is pretty low on the horizon, shadows can look cartoonishly long.

Without the tilt, this world would look phenomenally different. Imagine: if Earth’s axis wasn’t tilted, every day would be an equinox. This means that the Arctic and Antarctic would see sunlight every single day of the year. Although the poles would still be the coldest parts of the world, they’d likely be much warmer than they are now. And without any winter, the polar regions couldn’t have the deep-freeze conditions required to sustain ice caps and glaciers that lock tens of feet of sea rise. While the tropics would theoretically experience a similar climate as they do now, the constant temperature difference between the southern and northern latitudes means there would be different weather patterns and ocean currents. Seasonal growth is an important driver of plant evolution, which in turn affects how animals have evolved. There would be no need for breeding seasons or winter hibernation, for instance. So Earth’s biosphere would have looked radically different without the tilt. And even if we humans existed under such bizarre conditions, civilization would be quite different. The flow of the seasons has culturally shaped human societies, driving traditions, myths, art, and — why not — science. Oh, and Christmas would be rather dull.