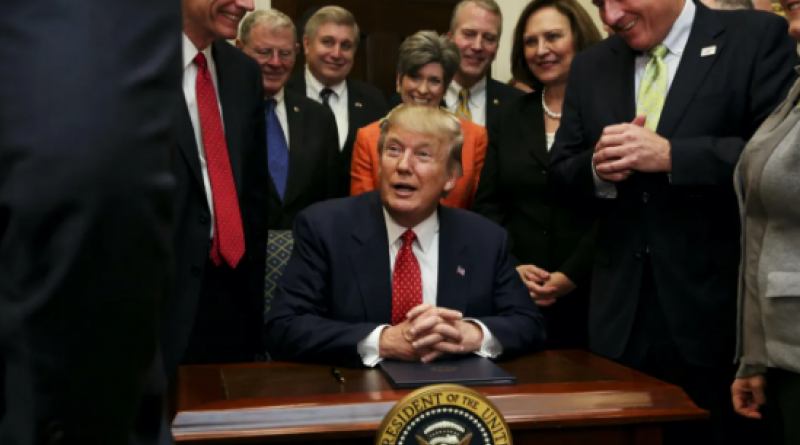 With President Donald Trump's re-election very much in doubt, his administration is rushing to ram through regulatory rollbacks that could adversely affect millions of Americans, the environment, and the ability of Joe Biden—should he win—to pursue his agenda or even undo the damage done over the past four years.

Reporting by the New York Times details how the administration is cutting corners as it scrambles to enact as much of its agenda as possible before ceding power on January 20 if Trump loses the election. Required public comment periods and detailed analyses, according to the Times, are being eschewed in favor of streamlined approval processes that have left even staunch deregulation defenders sounding the alarm. 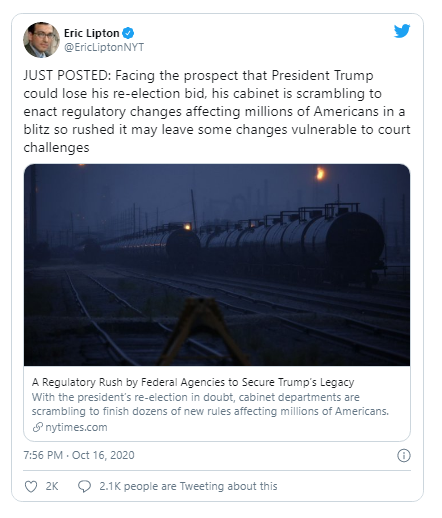 "Two main hallmarks of a good regulation is sound analysis to support the alternatives chosen and extensive public comment to get broader opinion," Susan E. Dudley, director of the George Washington University Regulatory Studies Center and formerly head of regulation in the George W. Bush White House, told the Times. "It is a concern if you are bypassing both of those."

Russell Vought, director of the White House Office of Management and Budget, told the Times that the president has always "worked quickly... to grow the economy by removing the mountain of Obama-Biden job-killing regulations."

However, critics are warning that some of the proposed changes are being rushed through with insufficient regard to the harm they might cause. Some of the issues that are raising red flags include:

In response to the reporting, critics of the administration like writer Matthew Kressel said that it helps make clear that if the Republicans in the White House cannot win reelection, they'll "scorch the earth before they go."

And Matthew Gertz, a senior fellow at Media Matters for America, tweeted: "I think people underestimate the amount of time and energy that is going to be needed just to climb out from under the mountain of shit this administration leaves behind." 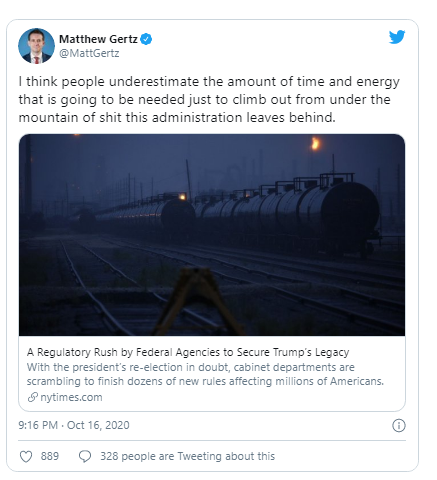 Many of the changes reflect the agendas of the powerful corporate and other business interests whose key players have donated generously to Trump, belying the president's oft-repeated claim that he is "draining the swamp." Other regulator rollbacks come despite warnings from career officials within federal agencies about the harm they could cause. 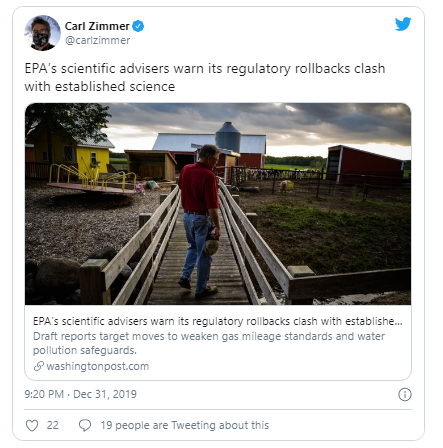 Alarmed by the administration's rushed rate of regulatory rollbacks, a group of over 15 Democratic senators earlier this month sent a letter to Labor Secretary Eugene Scalia warning of "profound economic implications" for some 143 million U.S. workers that would result from curtailing public comment periods for the proposed rule change regarding independent contractors.

"Workers across the country deserve a chance to fully examine and properly respond to these potentially radical changes, and a 30-day comment period is not nearly enough," the letter states.

1.8 Billion Tons More Greenhouse Gases Will Be Released, Thanks to Trump.