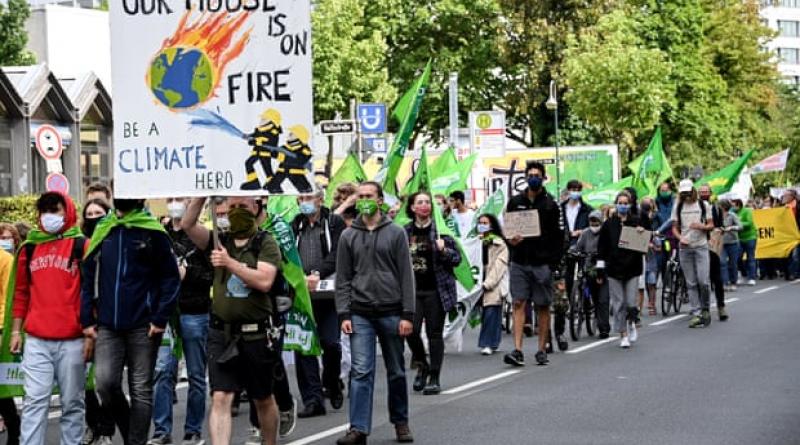 Greta Thunberg and some of the world’s leading climate scientists have written to EU leaders demanding they act immediately to avoid the worst impacts of the unfolding climate and ecological emergency.

The letter, which is being sent before a European council meeting starting on Friday, says the Covid-19 pandemic has shown that most leaders are able to act swiftly and decisively, but the same urgency had been missing in politicians’ response to the climate crisis.

“It is now clearer than ever that the climate crisis has never once been treated as a crisis, neither from the politicians, media, business nor finance. And the longer we keep pretending that we are on a reliable path to lower emissions and that the actions required to avoid a climate disaster are available within today’s system … the more precious time we will lose,” it says.

The EU unveiled its green new deal proposal this year, aiming to transform the bloc from a high to a low-carbon economy without reducing prosperity and while improving people’s quality of life, through cleaner air and water, better health and a thriving natural world.

They add that the target is based on a carbon budget that gives only a 50% chance of limiting global heating to 1.5C above pre-industrial levels, the figure set out in the 2015 Paris agreement.

“That is just a statistical flip of a coin, which doesn’t even include some of the key factors such as the global aspect of equity, most tipping points and feedback loops, as well as already built in additional warming hidden by toxic air pollution. So in reality it is much less than a 50% chance.”

The letter also argues that the climate and ecological emergency can only be addressed by tackling the underlying “social and racial injustices and oppression that have laid the foundations of our modern world”.

It says the EU, with its political and economic clout, has a moral obligation to lead the fight to create a fair and more sustainable world.

“We understand and know very well that the world is complicated and that what we are asking for may not be easy. The changes necessary to safeguard humanity may seem very unrealistic. But it is much more unrealistic to believe that our society would be able to survive the global heating we’re heading for, as well as other disastrous ecological consequences of today’s business as usual.”

Thunberg and the other signatories – including the scientists Michael Mann and Johan Rockström – call on EU leaders to immediately halt all investments in fossil fuel exploration and extraction and end subsidies. They say the EU must advocate to make ecocide an international crime and establish annual, binding carbon budgets.

Coronavirus: world treating symptoms, not cause of pandemics, says UN.