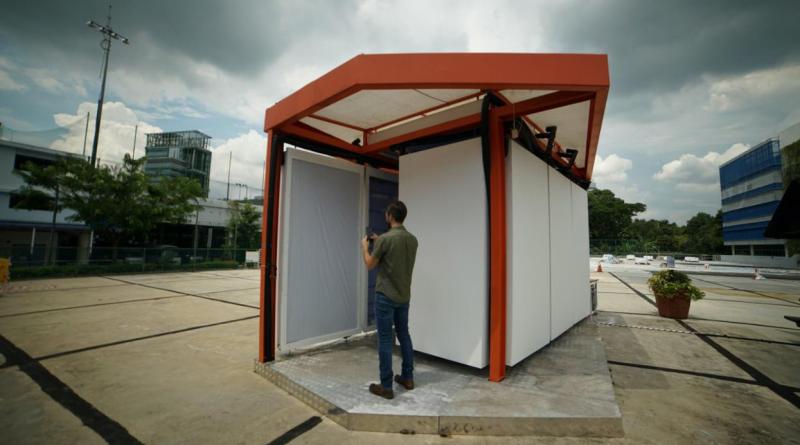 In the face of dangerous heat waves this summer, Americans have taken shelter in air conditioned cooling centers. Normally, that would be a wise choice, but during a pandemic, indoor shelters present new risks. The same air conditioning systems that keep us cool recirculate air around us, potentially spreading the coronavirus.

"Air conditioners look like they're bringing in air from the outside because they go through the window, but it is 100 percent recirculated air," said Forrest Meggers, an assistant professor of architecture at Princeton University. "If you had a system that could cool without being focused solely on cooling air, then you could actually open your windows."

Meggers and an international team of researchers have developed a safer way for people to beat the heat — a highly efficient cooling system that doesn't move air around.

Scientists lined door-sized panels with tiny tubes that circulate cold water. Stand next to a panel, and you can feel it drawing heat away from your body. Unlike air conditioners, these panels can be used with the window open — or even outdoors — making it possible to cool off while also getting some fresh air. This reduces the risk of spreading airborne viruses, like the coronavirus.

"If you look at what the health authorities and governments are saying, the safest place to be during this pandemic is outside," said Adam Rysanek, an assistant professor of environmental systems at the University of British Columbia, who was part of the research effort. "We're trying to find a way to keep you cool in a heat wave with the windows wide open, because the air is fresh. It's just that it's hot."

Cooling panels have been around for a while, but in limited use, because scientists haven't found a good way to deal with condensation. Like a cold can of Coke on a hot summer day, cooling panels collect drops of water, so they have to be paired with dehumidifiers indoors to stay dry. Otherwise, overhead panels might drip water on people standing underneath.

Meggers and his colleagues got around this problem by developing a thin, transparent membrane that repels condensation. This is the key breakthrough behind their cooling technology. Because it stays dry, it can be used in humid conditions, even outdoors.

In air conditioners, a dehumidifier dries out the air to prevent condensation. This component uses an enormous amount of energy, around half of the total power consumed by the air conditioner, researchers said. The new membrane they developed eliminates condensation with no energy cost, making the cooling panels significantly more efficient than a typical AC unit.

The research team involved scientists from the University of British Columbia, Princeton, UC Berkeley and the Singapore-ETH Centre. They published theirfindings in the Proceedings of the National Academy of Sciences.

"This study demonstrates that we can maintain comfortable conditions for people without cooling all the air around them," said Zoltan Nagy, an assistant professor of civil engineering at the University of Texas, who was not affiliated with the study. "Probably the most significant demonstration of this study is that humans can be provided with comfort in a very challenging thermal environment using a very efficient method."

Researchers developed their technology for use in the persistently hot, muggy climate of Singapore, where avoiding condensation would be particularly difficult.

To test their design, they assembled a set of cooling panels into a small tunnel, roughly the size of a school bus. The tunnel, dubbed the "Cold Tube," sat in a plaza in the United World College of South East Asia in Singapore. Scientists surveyed dozens of people about how they felt after walking through the tunnel. Even as the temperature neared 90 degrees F outside, most participants reported feeling comfortable in the Cold Tube.

Scientists said they want to make their technology available to consumers as quickly as possible, for use in homes and offices, or outdoors. Climate change is producing more severe heat, which is driving demand for air conditioners. Researchers hope their cooling panel will offer a more energy-efficient alternative to AC units. If consumers can use less power, that will help cut down on the pollution that is driving climate change.

Before they can sell the panels, researchers said they need to make them hardy enough to survive outdoors. The anti-condensation membrane is currently so thin that you could tear it with a pencil, so it must be made stronger. Scientists also need to demonstrate that the panels work efficiently indoors. Hospitals and schools in Singapore have already shown interest in the cooling system.

"We know the physics works. Now we need to do one more test so we have a bit more of a commercially viable product," Rysanek said. "It's really about trying to get this into people's hands as quickly as possible."

Researchers will develop a technology heat mitigation plan for one of the world's hottest cities.

3 Innovations Leading the Fight to Save Our Ocean.