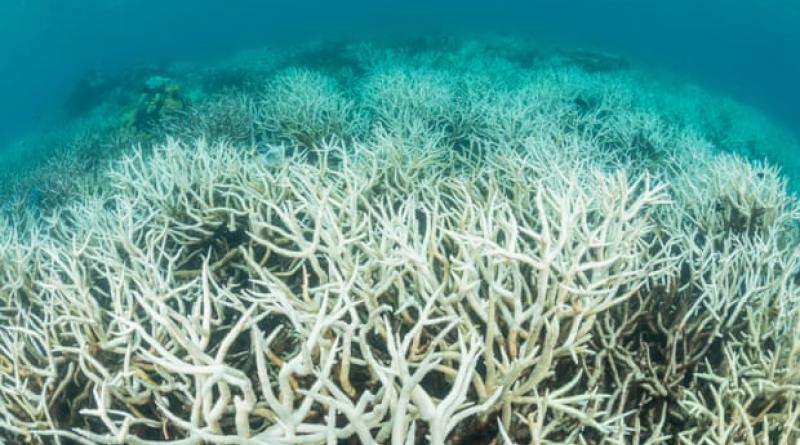 With the world 1C warmer, modelling shows there is still a risk of corals bleaching from heat stress this summer.

A global weather phenomenon that would typically keep ocean temperatures lower across the Great Barrier Reef may not be enough to stop another mass coral bleaching this coming summer, according to the marine park’s chief scientist.

On Thursday the authority revealed this summer’s outlook for the world’s biggest coral reef system that has been hit by three mass bleaching events in the past five years.

Clouds, rain and cyclones could still combine to keep temperatures along the reef low enough to avoid another bleaching event.

But modelling from the US government’s National Oceanic and Atmospheric Administration (Noaa) and Australia’s Bureau of Meteorology were in agreement that December and January would probably see ocean temperatures over the reef about 1C warmer than average.

“There is not a forecast of a mass bleaching event, but it’s certainly possible and everything hangs on this consideration of a typical La Niña,” Wachenfeld said.

“The whole world is one degree warmer, so we can’t just relax and say it’s a La Niña and so there won’t be heatwaves. The world is not that simple any more.”

About 90% of the extra heat from rising levels of greenhouse gases, caused mainly by burning fossil fuels and deforestation, is being taken up by oceans.

The authority announced the findings from a scientific workshop given on Wednesday with more than 40 marine park managers, scientists, experts and reef industry representatives.

In September the Bureau of Meteorology declared a La Niña and earlier this week said it would probably last until at least January 2021.

Wachenfeld said La Niña would typically bring more clouds, more rainfall and more cyclones, which can all help to cool the waters over the Great Barrier Reef.

“The reef is about 0.8C warmer than it was about 100 years ago and a lot of the shifts have happened quite recently. Ten years ago, I would have said in a La Niña we can’t get a bleaching event.

“The issue with climate change is that the background starting conditions are warmer than [they] would otherwise have been.”

“I think the reef is fundamentally in a precarious position because of climate change.

“We may turn around in April and say that was great and the weather wasn’t particularly damaging to the reef.

“But the fact the world is a degree warmer means there’s a huge amount more thermal energy and that’s leading to elevated risk of extreme weather in many of the world’s ecosystems.”

Asked if he was anxious about the coming months, he said: “We are in a world with a changing climate, so there’s always a background level of anxiety … we are in uncharted territory.”

He told Guardian Australia both the Noaa and Bureau of Meteorology data suggested there could be widespread heat stress across the reef that would “be enough to bleach corals but probably not enough to kill”.

Skirving said: “This is a long way out, but all indications are that the reef is going to have a stressful time this summer and that could come in several forms. It could be heat stress if there’s no cyclones, it could be run off if there’s more rainfall.”

“But now we have background temperatures that are higher because of climate change. That essentially means the sunshine has got less work to do to jack up the temperatures to bleaching levels.”

But Skirving said the arrival of cyclones and timing of tides relative to local weather could keep the waters cooler, but predicting cyclones months out was not possible.

The Bureau of Meteorology has said there is a 67% chance of there being more than the average four cyclones off Australia’s east this summer.

While a cyclone can help keep waters cool and protect corals from heat stress, it can also cause physical damage to reefs if it is big enough.

Rainfall can cool the reef, but flooding on land can also cause extra pollution to run off into the reef’s waters.

The authority said outbreaks of coral-eating crown-of-thorns starfish were an ongoing impact, particularly in the central and southern parts of the reef.