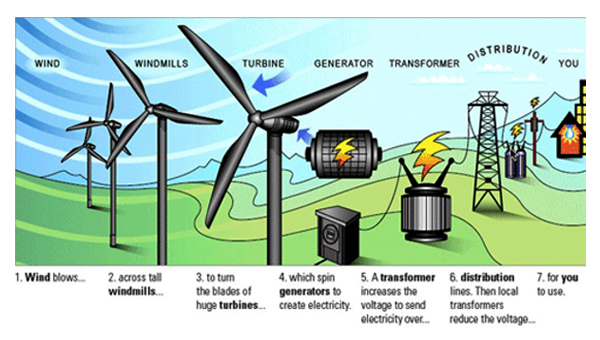 Winds, which are large masses of air moving from one area to another, are created due to the uneven warming of the surface of the Earth by the sun's rays. The kinetic energy of the wind is so much that, based on the current technology of exploitation, could cover more than twice the needs of humans in electricity (http://www.cres.gr/kape/energeia_politis/energeia_politis_wind.htm ).

The exploitation of wind power is lost in the depths of history. The hail, according to Homer, of the winds in the Aeolus pouch shows precisely the need of the people to have the winds in the place and time they would like. For many hundreds of years, the movement of the ships was based on the strength of the wind, while the use of the windmill as a driving machine was abandoned only in the middle of the last century. It is the time when conventional fuels and electricity are rapidly spreading, reaching as far as possible. The oil crisis in the early 1970s brings renewables and wind energy back to the forefront. Modern wind turbines spilled into Denmark. In the meantime, there has been a rapid growth, which is reinforced by the imperative need to protect the environment. It is becoming more and more aware that the wind is a pure, inexhaustible source of energy.