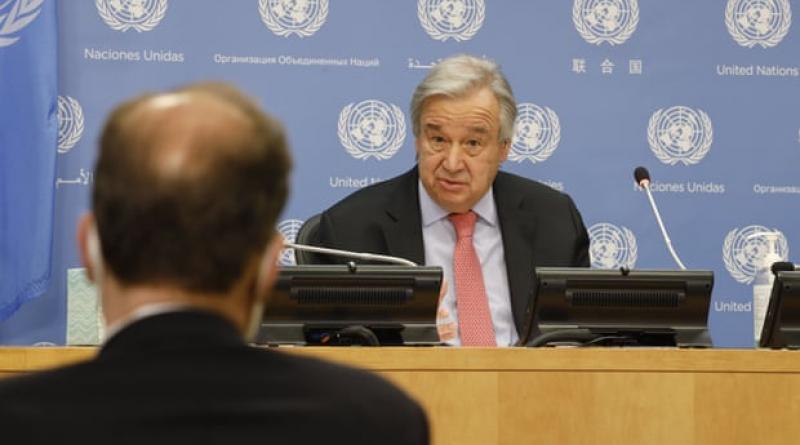 Governments must step up their efforts ahead of vital climate talks this year by agreeing to negotiate formally online for the first time, the UN secretary general has said.

António Guterres told a meeting of governments and officials on Monday that formal negotiations for the Cop26 summit must be begun virtually owing to the Covid-19 pandemic and the constraints it had placed on governments meeting in person.

He said: “Preparatory negotiations for Cop26 will need to take place virtually … We simply cannot allow the pandemic to keep us from working together on the crucial pathway to Glasgow. Although there will be challenges, we must adapt. The stakes are too high to do otherwise.”

Informal discussions on how countries plan to meet the goals of the 2015 Paris agreement have been taking place for more than a year. Officials from the UK have led the way, in their role as hosts of the Cop26 talks, which last spring were postponed by a year to a new date of this November in Glasgow.

The formal negotiations that are needed for countries to make decisions normally take place months ahead of the annual summit. These talks are vital in order to ensure that countries have taken key decisions ahead of time, rather than snarling up the two-week summit.

Many developing countries are concerned that they will find it hard to participate in formal negotiations online, however, owing to technical issues and their smaller number of personnel devoted to the talks. At the annual Cop summits, developed countries such as EU member states and emerging economies such as China routinely send scores of negotiators, but many developing countries can send only a handful of delegates.

Guterres sought to reassure them, saying: “We can conduct our business in an inclusive and transparent manner.”

He said the UN was striving to make participation easier for all countries. “I have directed UN officials around the world to make offices and venues available to allow for all countries to participate in virtual negotiations,” he said. “We will support this process in every way possible to ensure its success.”

Past summits, including the Copenhagen summit in 2009, have failed or run into problems when too many issues were left to be resolved in the final two-week meeting. By contrast, the Paris summit in 2015 was a resounding success, partly because the French hosts orchestrated 18 months of talks in advance, ensuring decisions had already been reached on key issues well ahead of the December 2015 conference.

At the last UN climate talks, in Madrid in December 2019, countries spent more than two weeks wrangling over the intricacies of global carbon markets, which are supposed to be one way of bringing down greenhouse gas emissions. Those talks ended inconclusively, leaving the issue on the table for Cop26.

Guterres voiced his concern that these wranglings, if not sorted out before Cop26, would get in the way of agreement this November. The UN wants all countries to come up with plans for net zero emissions by around mid-century, with shorter-term plans to reduce emissions by 2030, for Cop26 to be a success.

Guterres said: “We must send a clear message to the parties: it is time to wrap up negotiations and move towards its full implementation … This issue [of carbon markets] cannot continue to be deferred, Cop after Cop after Cop. We need a political decision.”

While the UK is still hopeful that the talks themselves will take place in person, with participation from civil society, some restrictions are likely still to be in place by then, and work is ongoing to ensure such constraints can be managed. In the meantime, however, senior figures in the talks are concerned that informal discussions will not be enough to bring about a successful conclusion at Glasgow.

Patricia Espinosa, the UN’s top climate official, told a virtual audience at the London School of Economics last week that her secretariat, which runs the talks, was exploring ways to run formal negotiations online. She said meetings were taking place in a roster of various time zones, to ensure that no country was disadvantaged, and that developing countries were being provided with technical assistance to ensure they could take part.

The UK as host of Cop26 cannot decree that negotiations should take place formally online. Developed and developing country representatives, known as the Cop Bureau, will need to agree, as they did to the postponement last year.