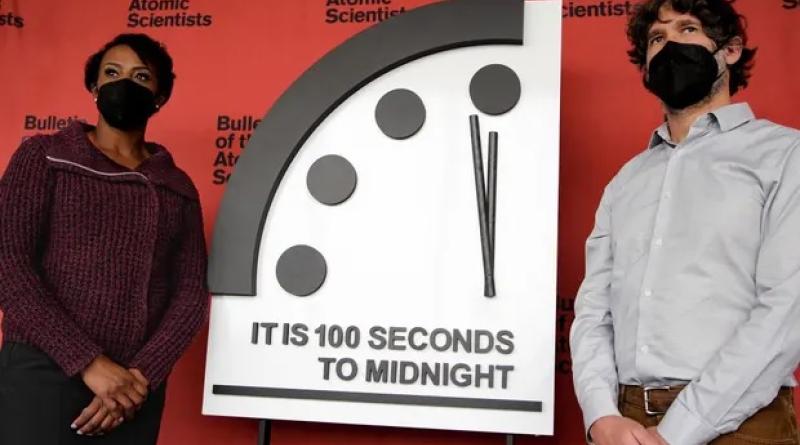 The Doomsday Clock, established 75 years ago by scientists to illustrate the danger of human extinction, remains at 100 seconds to midnight according to a panel of experts.

It is the third year in a row that the clock has been set at that time, which is closer to midnight than at any period during the cold war, including the Cuban missile crisis.

The Bulletin of the Atomic Scientists, which curates the annual unveiling of the clock’s hands, said the decision to leave them unchanged reflects that a few positive developments over the course of the past year have been counterbalanced by continued drift towards the proliferation of nuclear weapons, the climate emergency, and the rise of biological threats.

“The Doomsday Clock is holding steady at 100 seconds to midnight. But steady is not good news,” said Sharon Squassoni, a George Washington University professor and the co-chair of the Bulletin’s science and security board, which decides the clock’s hand movements each year. “In fact, it reflects the judgment of the board that we are stuck in a perilous moment, one that brings neither stability nor security.”

Among the positive developments noted by the board was the decision last year to extend the New Start arms control agreement between Russia and the US, the restart of talks over the Iran nuclear programme, and the coming to office in the US of an administration that believes in climate science and has pledged to act to mitigate global emissions.

Set against those trends, the board pointed to the continued investment by major powers in their nuclear arsenals, the absence of progress in the Iran nuclear discussions, and the weakness of global actions to address the climate emergency.

“The Doomsday Clock is not set by good intentions, but rather by evidence of action, or in this case inaction,” Scott Sagan, a political science professor at Stanford University, said.

The board also drew attention to biological threats in the light of the global vulnerability highlighted by the Covid-19 pandemic.

“The fact that we have active biological weapons programs in Russia and North Korea, with China and Iran close behind, should give us pause,” said Asha M George, the executive director of the Bipartisan Commission on Biodefense. “We stand on the precipice of a biological cataclysm. It will take very little more from this arena to push us right over the edge.”

COVER PHOTO: Third year in a row that the clock has been set at this time, which is closer to midnight than at any period during the cold war. Photograph: The Hastings Group/AFP/Getty Images

Doomsday Clock: 100 seconds until the end of the world.