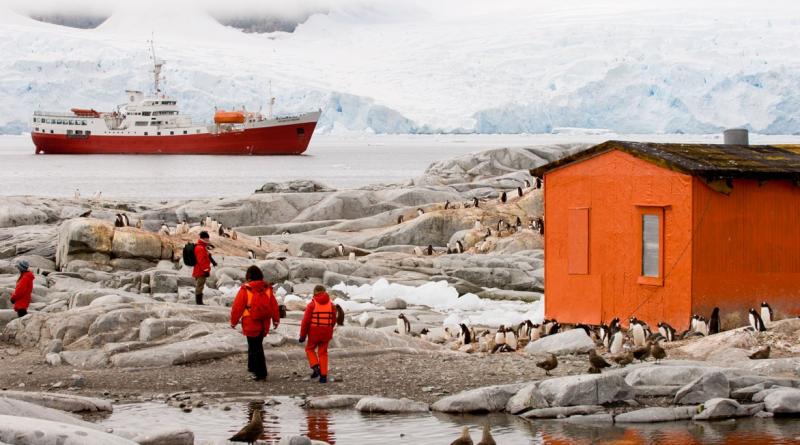 Banning fishing in warming coastal waters and limiting tourism and construction on land will help to protect marine mammals and seabirds.

Among the windswept glaciers and icebergs of the western Antarctic Peninsula is an oasis of life. Threatened humpback and minke whales patrol the waters. Fish, squid and seals swim alongside noisy colonies of chinstrap, Adélie and gentoo penguins on the shore. It’s a complex web of life. All these species feed on small, shrimp-like crustaceans called Antarctic krill. And many are themselves prey for leopard seals, killer whales and predatory seabirds such as skuas and giant petrels.

This delicate and iconic ecosystem is in peril. The western Antarctic Peninsula (the northernmost part of the continent) is one of the fastest-warming places on Earth. In February, temperatures there reached a record 20.75 °C, with an average daily temperature that was 2 °C higher than the means for the preceding 70 years1. Most of the region’s glaciers are receding. And sea ice is dwindling — spring 2016 saw it retreat to the smallest extent since satellite records began in the 1970s. If carbon emissions keep climbing, in 50 years’ time, the area covered by sea ice will have halved and the volume of ice shelves will have shrunk by one-quarter2.

Heavy fishing is depleting parts of the region of the main food source, krill. The waters around the peninsula are home to 70% of the world’s Antarctic krill, the larvae of which shelter in the sea ice3. Their loss means hunger for many species. It even alters biogeochemical systems in the ocean, including the carbon cycle3. Krill feed on phytoplankton — microscopic marine algae that extract carbon from the atmosphere. The krill excrete pellets containing carbon and other nutrients, including fluoride, calcium and phosphorus, which are energy sources for a myriad of microorganisms3.

With human activity and construction also rising, the region’s precious biodiversity is at risk of being destroyed4. Preventive measures must be taken immediately, on sea and on land.

The first step is to protect the rich seas around the Antarctic Peninsula. A proposal to make them a marine protected area (MPA) is being discussed over the next two weeks by the Commission for the Conservation of Antarctic Marine Living Resources (CCAMLR), a group of governments that collectively manage the Southern Ocean’s resources. We urge them to act now.

Fishing. Krill fisheries in the Southern Ocean have been growing for decades, to meet rising demand for omega-3 dietary supplements and fishmeal. Almost 400,000 tonnes of Antarctic krill were caught in 2019 — the third-largest krill catch in history, a volume not seen since the 1980s. More than 90% was caught around the Antarctic Peninsula. The catch there has tripled since 2000, from 88,800 to 289,500 tonnes in 2018.

As sea ice retreats from warming northern waters, the krill move south, attracting more vessels to penguin and marine-mammal foraging grounds. Even small catches can be harmful at a sensitive time and place5. For example, fishing near colonies of breeding penguins hampers their foraging and reproductive success. Humpback whales migrate to krill-rich waters to feed before moving north to breed — finding little to eat there also reduces their ability to reproduce.

Impacts of fishing are difficult to track in such a remote place. Little is known about the status of many Southern Ocean species, including many seabirds and marine mammals. That makes it hard to manage fisheries in ways that protect the whole ecosystem, especially in a warming climate. Precaution is therefore paramount. And much more needs to be learnt.

Tourism. The peninsula is the most-visited region in Antarctica (see ‘Voyage to the peninsula’). It’s close to South America and has dramatic scenery and an abundance of wildlife. Tourist numbers have doubled in the past decade — more than 74,000 people visited last year. Some popular sites receive around 20,000 visitors per season. These include the picturesque Neko Harbour, where glaciers and whales abound, and Port Lockroy, which has a gentoo penguin colony and a post office.

Unlike the rest of Antarctica, where one-third of the land remains unvisited, the peninsula has no large areas left that are untouched by humans6. Ships pollute the ocean with microplastics, oils and engine noise. Between 1981 and 2011, at least 19 vessels ran aground and released oil. Ships can also introduce invasive species, such as mussels, predatory sea stars and smothering algae, which can compete with or prey on native species.

Guidelines for cruise ships and tourists visiting the region are provided by the International Association of Antarctica Tour Operators (IAATO), a self-regulating association that advocates for safe and environmentally responsible travel. IAATO restricts the number of daily visitors to each landing location: a maximum of 100 people from a vessel can be ashore at any one time. No waste should be left, souvenirs taken or animals disturbed. However, only IAATO members must comply. Increasing numbers of unregulated vessels are arriving carrying large numbers of tourists.

Mechanisms to reduce these impacts are needed. IAATO is supporting a project to gather evidence to better manage tourism, science and biodiversity on the peninsula, expected to be completed next year. This initiative is in partnership with the Scientific Committee on Antarctic Research (SCAR), an organization that coordinates international research in Antarctica. More remains to be done, however, including reducing the impacts of ships.

Research infrastructure. Visiting scientists can also damage Antarctica’s environment. The peninsula has the highest concentration of research stations on the continent — 18 nations have science facilities there, covering fields from space physics to geoscience, wildlife monitoring and climate research. The researchers are attracted for the same reasons that the region is so biodiverse — accessible floes of sea ice shift through the seasons, and much of the land is ice-free.

Buildings and infrastructure displace wildlife and vegetation. Aircraft noise disturbs penguins, other seabirds and seals that congregate on the peninsula to breed and moult. Associated with these human activities, land and coastlines next to research stations are polluted by hydrocarbons, metals, fire retardants and microbial pollution from wastewater.

Nations need to limit the size and footprints of their research sites in Antarctica. There have been several new infrastructure projects in the area6. Brazil reconstructed its Comandante Ferraz research station that had been destroyed by fire, doubling its size in the process. And the United Kingdom is expanding the wharf and stabilizing the coast near its Rothera station. Elsewhere, Australia is planning to build a 2.7-kilometre-long concrete runway in East Antarctica. And China is building a research station on Inexpressible Island in Terra Nova Bay.

Climate change. Global warming threatens to unravel the ecosystem of the entire Southern Ocean. Its impacts are especially insidious off the Antarctic Peninsula, where species such as penguins, seals, whales and krill are struggling to cope with the loss of sea ice. Warmer weather makes penguins more prone to diseases. And heavy rains or unseasonal snowfall can chill birds, kill chicks and bury nests and eggs.

Other species are moving in. Small sea-squirts or tunicates called salps (Salpidae)2, which are less nutritious than krill, have become twice as common as they were in the 1920s. Invasive mussels (Mytilus spp.) and invertebrates called bryozoans (Membranipora membranacea) are reaching the peninsula on visiting ships. Should they become established on the shoreline, they are likely to outcompete other species such as sponges. On land, non-native grasses have been found on ground exposed by retreating glaciers.

An MPA around the Antarctic Peninsula is essential to preserve this wilderness at sea7,8. Proposed by Chile and Argentina in 2018 (M. M. S. is one of the Argentinian researchers leading the proposal), it would be the third Antarctic MPA. One was implemented in the South Orkney Islands to the north in 2009, and another in the Ross Sea — a deep bay between West and East Antarctica — in 2016. Two more MPA proposals are on the table — another off East Antarctica and one in the Weddell Sea. Although protecting the peninsula is most pressing owing to rising human threats, the CCAMLR should adopt all three proposals. This would fulfil the commitment it made in 2002 to set up a network of MPAs spanning a representative set of ecosystems.

The proposed Antarctic Peninsula MPA is split into two zones, across a total area of 670,000 square kilometres (see ‘Antarctic Peninsula: proposed marine protection’). This takes into account future climate changes, the greatest impacts of which will be felt first in the north and then spread south. Some krill fishing will be allowed in the northern zone, with catch limits set by the CCAMLR. Fishing will be banned in the south to protect those waters as sea ice retreats. Models estimate that the MPA should increase the number of whales by about 5% and of penguins by 10%9.

The proposed MPA would be in place for 70 years. A review every decade is designed to allow the zones to be adjusted to preserve the ecosystems. Research and monitoring is built in, to follow the impacts of fishing and climate change. Data from the CCAMLR Ecosystem Monitoring Program (CEMP), which includes long-term studies of the abundance and distribution of krill and its predators, would be incorporated, for example9.

Negotiations over the MPA have been positive so far. But ratification requires consensus from CCAMLR’s member states. And that is challenging — it took five years to negotiate the Ross Sea MPA. The issues are similar today. Some krill-fishing nations worry that the MPA will impede their operations. Some members disregard the science, denying the threats to wildlife and from climate change — a wholly political move. Nations must acknowledge the severity of the risks and work together to avoid delays that would be damaging.

On land, the impacts of fishing, tourism, research and climate change also need to be better managed. So far, this has been piecemeal, with single nations or small groups of countries proposing sites for protection through the Antarctic Treaty System or the CCAMLR. This has resulted in only 1.5% of ice-free land across Antarctica (0.005% of the total continental area) being formally protected for biodiversity conservation10. And many of those sites are close to research stations and tourist landings. Less than half of the Antarctic Peninsula’s species are within these protected areas. By contrast, the United Nations Convention on Biological Diversity recommends protecting around 17% of global lands10.

Antarctica needs a systematic approach to designating protected areas. Areas of high conservation value need to be identified collaboratively. Antarctica needs a comprehensive prioritization of management strategies. To this end, IAATO, the CCAMLR and the Committee for Environmental Protection of the Antarctic Treaty System must work alongside other stakeholders, such as the Council of Managers of National Antarctic Programs (COMNAP; a group of organizations that deliver and support research in Antarctica). COMNAP should also work to limit the expansion of research infrastructure. And IAATO and parties to the Antarctic Treaty System should limit tourist activity and ensure that all companies and operators abide by IAATO regulations.

Nations and institutions with Antarctic interests must collaborate to generate the science base needed to inform conservation planning and policies. The SCAR community is currently considering such a programme, called Integrated Science to Inform Antarctic and Southern Ocean Conservation.

Antarctica has been a beacon of international diplomacy, scientific and peaceful cooperation for 60 years. History will judge us harshly if we fail to protect the world’s last large and unique wilderness.