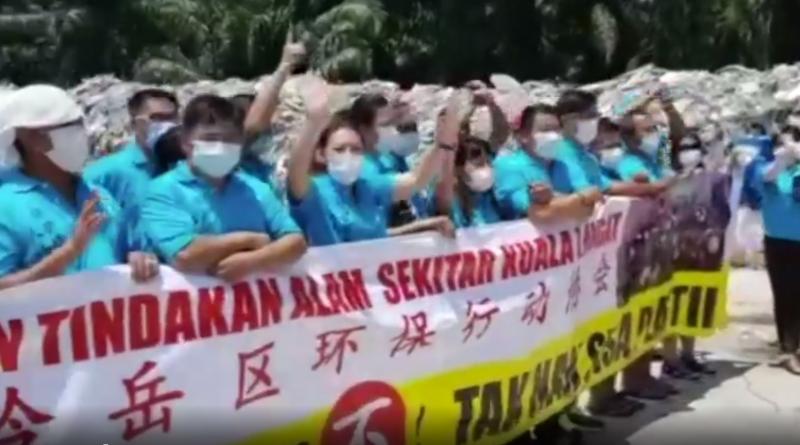 Malaysia has become one of the world's biggest plastic importers, taking in rubbish the rest of the world doesn't want. But one small town is paying the price for this - and it is now smothered in 17,000 tonnes of waste.

It began last summer. Every night, after the clock struck midnight, Daniel Tay knew exactly what was coming.

He would shut his doors, seal his windows and wait for the inevitable. Soon his room would be filled with an acrid smell, like rubber being burned. Coughing, his lungs would tighten.

Over the next few months, the strange smell would return every night, like clockwork.

It was only later that he found the source of the smell - illegal recycling factories that were secretly burning plastic.

Nowhere else to go

At that point he had no idea that in 2017 China had decided to ban the import of foreign plastic waste. In that year alone it had taken in seven million tonnes of plastic scrap and many environmental campaigners considered it a victory when China clamped down.

But with nowhere to go, the bulk of the plastic waste - most of it from the UK, the US and Japan - just went somewhere else and that was to Malaysia.

It could have been any town but Jenjarom's proximity to Port Klang - Malaysia's largest port and the entry point for most of the country's plastic imports - made it the ideal location.

From January to July 2018 alone, some 754,000 tonnes of plastic waste was imported into Malaysia. 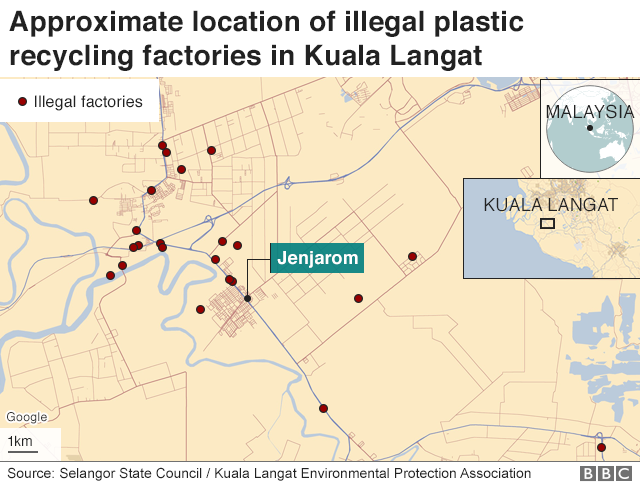 According to the State Council, there were soon 33 illegal factories in Kuala Langat - the district Jenjarom is located in. Some sprang up near dense palm oil plantations, others were closer to town.

But it would be months before residents learned of their existence - and then only after the symptoms started appearing.

"The smells started a while ago but got really bad around August this year," said Mr Tay.

"I started to feel unwell and I would keep coughing. I was really angry when I found out it was because of the factories."

Plastic waste is typically recycled into pellets, which can then be used to manufacture other types of plastic.

Not all plastic can be recycled, so legal recycling plants should send unrecyclable plastics to waste centres - something which costs money.

But many illegal recyling plants instead choose to dispose of it in free but unsanitary ways, either burying it or more commonly - burning.

Ngoo Kwi Hong says the fumes from the burning sparked a cough so violent she even coughed up a blood clot.

"I couldn't sleep at night because it was so smelly. I became like a zombie, I was so tired," said Ms Ngoo.

"It was only later I found out there were factories surrounding my house - north, south, east, west."

Those who lived nearest to the factories were affected the most.

Belle Tan, who found out there was an illegal factory just 1km from her house, spoke of the impact on her 11-year-old son.

"He got a really bad rash around his stomach, neck, legs and arms. His skin would keep peeling, even when we touched him it hurt. I was angry and scared for his health but what could I do? The smell was everywhere in the air."

It's unclear if these ailments can be directly linked to air pollution, but one expert said inhaling burnt plastic fumes was likely to have had an impact on their respiratory health.

"The main thing about [these plastic fumes] is that they are carcinogenic. Carcinogens [are involved] in causing cancer," Tong Yen Wah, a professor at the National University of Singapore (NUS)'s Department of Chemical and Bio-molecular Engineering, told the BBC.

"It also depends a lot on the types of plastics being burnt and the exposure to it. If you have short term exposure at a high level you might have difficulty breathing... [or it might] trigger some effects in your lungs. But if it's long term exposure... that's where the carcinogenic effects come in." 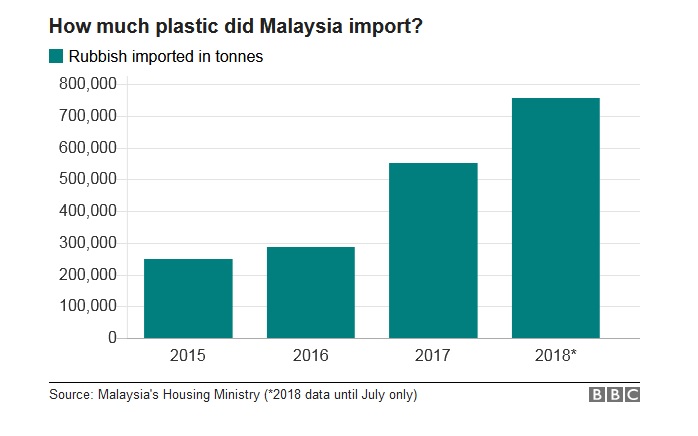 But many in the town remain completely unaware or indifferent to the potential effects of the burning.

"Many people here are just trying to make a simple living," said Mr Tay. "They'll just say its smelly and get on with their lives, they don't understand that it is something that could be slowly poisoning them."

The BBC spoke to several residents, many of whom said they had smelt the fumes, but hadn't given it much thought.

"You keep smelling it and your body gets used to it," joked one resident. "Maybe it could even be good for you."

The Malaysian government has now shut down 33 factories it says were illegal in Jenjarom, and for the most part, the fumes are gone.

But the 17,000 tonnes of rubbish left by these factories is still there - and not insignificant for a town of 30,000. Most of this waste has been repossessed by the authorities, but a staggering 4,000 tonnes of waste plastic still sits on a single site - open to anyone who might walk by. 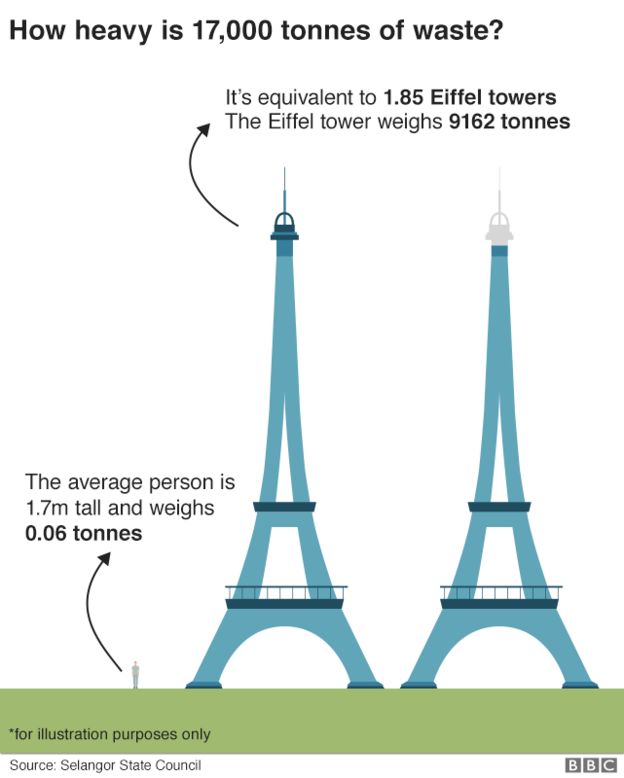 A mountain of rubbish greets you the minute you arrive at what was once an unused piece of land, but is now a makeshift landfill.

A quick walk around the site reveals that a staggering amount of plastic waste comes from foreign countries, with a huge portion of it from Japan and the UK - brands like Asda, Co-op and Fairy can be seen strewn around.

"We are trying to identify who is the owner of the land, we are still investigating this," Minister of Housing and Local Government Zuraida Kamaruddin told the BBC.

The state that Jenjarom sits in - Selangor - has tried to auction it off but to no avail.

"No one wants it because it is so contaminated," Yeo Bee Yin, Minister of Energy, Technology, Science, Environment and Climate Change, acknowledged.

Ms Yeo reveals that there are several options available - the most viable of which would be sending the rubbish to a cement plant, which would burn the plastic to generate heat for their boiler. But this solution would come at a high cost to the government.

"[We estimate that it] will cost around RM2.5m just to transport that pile [to the plant]," Ms Yeo revealed. "[But we recognise that] we have to get rid of that pile first."

But Jenjarom is just one town in Malaysia - the problem of illegal plastic recycling doesn't end there.

"Many of these [illegal factory operators] rent the land from local Malaysian landowners and set up very [basic] factories," Ng Sze Han, a local councillor in Selangor, told the BBC.

"When we [catch the illegal factory operators], they just hit and run - we shut them down there, they move to another part of Malaysia."

One landowner the BBC spoke to reveals he rented his land out for RM50,000 (about $12,260, £9,500) a month to a Chinese national. He says he wasn't aware of what they were doing, but was essentially only concerned with collecting rent. It's not an inconsiderable sum when you learn that the average monthly income for a Malaysian family in 2016 was RM5228.

Mr Ng reveals he's already had calls from officials in Johor and Negeri Sembilan - other states in Malaysia - saying illegal factories had begun popping up in their patches.

He says the problem of illegal plastic recycling is unlikely to be solved effectively without a total ban on plastic.

But this is unlikely to happen.

Ms Kamaruddin says the government had initially considered banning plastic, but "after we studied, we realised it [had a lot of] business potential for Malaysia".

Instead, she says, stricter rules are being placed on plastic importers - they'll now have to adhere to newly imposed criteria before being able to gain an Approval Permit (AP) to import plastic waste.

Only companies with a recognised AP will be allowed to import plastic waste into Malaysia.

"If you nip it at the source and customs control it well, I think it will be effective in reducing a lot," Ms Yeo adds.

To the rest of the world

There's a bigger problem here - and what Jenjarom reveals is that there is a huge flaw in the plastic recycling system.

Plastic waste and scrap has its own international trade code - HS3915.

But what this code fails to take into account is whether the waste being imported is of good quality or contaminated - there's no way to know unless someone manually goes through it.

A report by the United Nations Environment Programme in 2017 recognised that it was common for mixed plastic waste to be concealed "as clean plastic scrap".

What is needed, says Ms Yeo, is a proper labelling system that will be able to take this distinction into account.

"At the end of the day, [what we need is a] systemic standardisation for waste," she said.

Otherwise, it seems only a matter of time before other towns in Malaysia - or even the rest of the world - become the next Jenjarom.