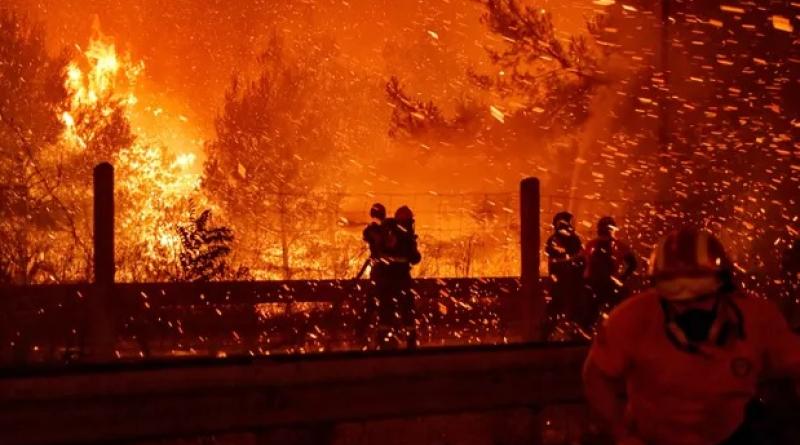 Maximiliano Herrera, watcher of extreme weather, says last year likely to be in top five or six hottest in history

More than 400 weather stations around the world beat their all-time highest temperature records in 2021, according to a climatologist who has been compiling weather records for over 30 years.

Maximiliano Herrera keeps track of extreme weather around the world, and publishes an annual list of records broken in the previous year. He and many other climatologists and meteorologists who follow these issues closely expect that 2021 will probably not be the hottest year in history (Noaa and Nasa will publish their results in the next few days).

But it is likely to be in the top five or six, continuing the long-term upward trend. The past six years have been the six hottest on record. 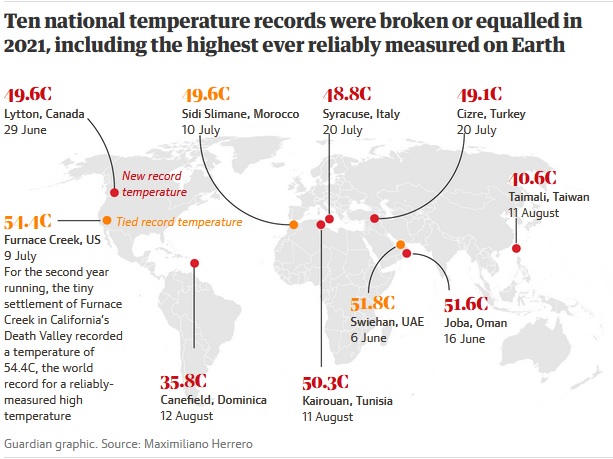 A few continental and planetary records fell too: Africa had its warmest June and September ever. August brought 48.8C (119.8F) in Syracuse, Italy, the highest temperature ever recorded in Europe. July had already brought 54.4C (130F) in Furnace Creek in the US’s Death Valley – the highest reliably recorded temperature on Earth. (A temperature recorded as 129.9F in 2020 was also rounded up to 130F.)

But there were a few specific events that particularly stood out for experts. For meteorologist Patricia Nying’uro, a co-founder of Climate Without Borders and based at the Kenyan Meteorological Department, the two consecutive failed rain seasons in Kenya were unusual, and forced the government to organise for food aid for the first time in many years.

“You can certainly see the effect of climate change in our weather in Kenya, and globally. We’re just putting together the data for 2021, but we think we will have seen an annual temperature which is 2.1C higher than normal for some parts of the country. The shifts are very noticeable, from one extreme to another in a very short space of time.”

This was one of the reasons Nying’uro helped found CWB, a group of broadcast meteorologists and weather presenters from around the world who share information on extreme weather events. They also support weather presenters to make the connections with climate change and communicate these to the public.

Meteorologist Scott Duncan, who collects data on world weather, pointed to the European summer heatwaves, which broke records in a number of countries – and were accompanied by wildfires around the Mediterranean. They had been preceded by a hot March, a sharp cold shock in early April which “was catastrophic for many agricultural businesses in France”, and then the floods in July. “Those events really stood out for me.”

He also highlighted the heat in Alaska in December, where a number of records were broken by a large margin. “That was extraordinary.”

China experienced its hottest ever year, according to the China Meteorological Administration. But it was the rain that hit the central province of Henan that really shocked: the region was hit by more rain in three days than it normally receives in an entire year. Hundreds died, crops and homes were destroyed, and the cleanup continues. Jia Xiaolong, deputy head of the National Climate Centre, said the situation last year had been abnormal.

“Warming was the main theme of China’s climate in 2021. In the context of global warming, recurrent extreme weather and climate events have become the norm, which is also a major challenge to disaster prevention and mitigation.”

Other key unusual weather events last year were the Siberian heatwave in the summer, and the deep freeze in Texas in February. Nearly 200 people died, millions of homes were without power, and the fallout led to huge political rows.

Guy Walton, an activist meteorologist who has been campaigning on climate change since the late 1980s said “the cold outbreak in February 2021 leading to the failure of the power grid in Texas and dozens of deaths” was “ironically attributed to climate change by many”. He also highlighted “the extraordinary mild/warm fall leading to the warmest December on record for the United States. The National Centers for Environmental Information should make this official in the next couple of days.”

But the key event of 2021 for the meteorological and climatological community was the extreme heatwave that struck the west coast of the US in June/July, led to a heat dome and broke records by up to 5C in some places. At the time, Geert Jan van Oldenborgh (who died in October 2021) of the Royal Netherlands Meteorological Institute called it “way beyond the upper bound” and “surprising and shaking”.

“Of course 2021 was full of extreme events,” said Herrera. “But if I have to name one, I’ll name what struck every single climatologist and meteorologist in the world.” Herrera nicknamed the event “the mother of all heatwaves”.

“I confess, I would have never believed this to be even physically impossible. The magnitude of this event surpassed anything I have seen after a life of researching extreme events in all modern world climatic history in the past couple of centuries.”

Meanwhile, 2022 has begun with a number of records already shattered in the UK and the US in the first few days of the year.