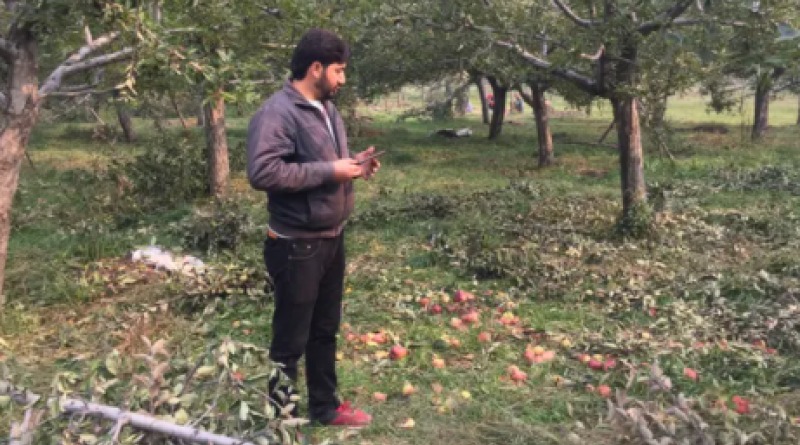 Kashmiri farmers lose half their harvest to early snows for third year, with fears for future of the region’s orchards

The homegrown apple is in danger of becoming a rarity in India, as farmers have lost up to half their harvest this year, with predictions that the country’s main orchards could soon be all but wiped out.

Early snowfalls in Kashmir, where almost 80% of India’s apples are grown, have seen the region’s farmers lose half their crops in the third year of disastrous harvests.

Officials are trying to calculate the loss to the apple industry, which contributes almost a third – 50bn rupees (£500m) – to the local economy annually. The apples are sold in fruit markets across India and some are exported.

Researchers have warned that orchards in the Kashmir valley, which is ringed by the Greater Himalayas and the Pir Panjal mountains, are likely to become unsustainable in the next few years, as the climate crisis affects production.

The last 20 years have seen gradual changes in weather patterns in the region, which have intensified in the past five years. This is the third year harvests have been affected by early and heavier snowfalls in the Kashmir valley.

According to Kashmir’s department of horticulture, 5bn rupees were lost from harvests in 2018. This rose to 22.5bn rupees in 2019, which saw the heaviest snowfall Kashmir has experienced in 60 years.

“In the light of the changing climate, apple harvesting is not sustainable [here],” said Dr Irfan Rashid, assistant professor at the University of Kashmir.

“Usually, Kashmir receives the snowfall after 15 December, but over the last two decades, we are experiencing early snowfalls. The harvest time for many apple varieties is November. In the last five years, we have had three erratic snowfalls and in the future the situation may exacerbate.”

He added: “Climate models forecast a very grim scenario as far as erratic weather is concerned. The Himalayas, which includes this region, is going to receive more frequent extreme events as we progress through the century. It is very normal that Kashmir will be witnessing extreme weather events.”

In response to the crisis, officials at Kashmir’s department of horticulture have been encouraging farmers to plant new “high-density” imported varieties, which are harvested earlier than existing crops. The government has been promoting subsidy schemes to help farmers buy and market the new varieties and wants to increase the amount of land used for growing.

Ajaz Ahmad Bhat, director general of the horticultural department, said: “We cannot stop what is coming. The only way out we have is conversion to high-density varieties.”

Rashid said the government strategy could help mitigate the impact of erratic snowfalls, but added it would result in the loss of local varieties.

“Already, the local varieties like ambri are shrinking,” he said.

Farmers have been reluctant to embrace new varieties, pointing to disappointing results from pilot projects.

“Shifting to high-density varieties is not easy for us,” said Nawaz Ahmad Thoker, a farmer from Ramnagri, a sleepy village surrounded by orchards in Jammu and Kashmir state. “We will have to uproot the existing orchard and then plant the new saplings, which will incur us huge costs.”

Thoker, whose family has tended their seven-acre (2.8-hectare) orchard for 35 years, broke down when he surveyed the damage to his crops after heavy snowfall at the end of October. Trunks of half the trees were split and branches still with their fruit attached were buried under six inches of snow.

He estimated he had lost 100,000 rupees (£1,000), which will mean a difficult year for him and his family, as he struggles to pay for his children’s school and parents’ healthcare.

“It was not only the year’s harvest lost in front of my eyes, but the three-decades of hard work by me and my family, destroyed,” he said.

“I am thinking of doing some other work, maybe start a business so that my children have a good future,” said Thoker. “It seems our next generation will not be able to see these apple orchards.”

‘Farmers are digging their own graves’: true cost of growing food in Spain’s arid south