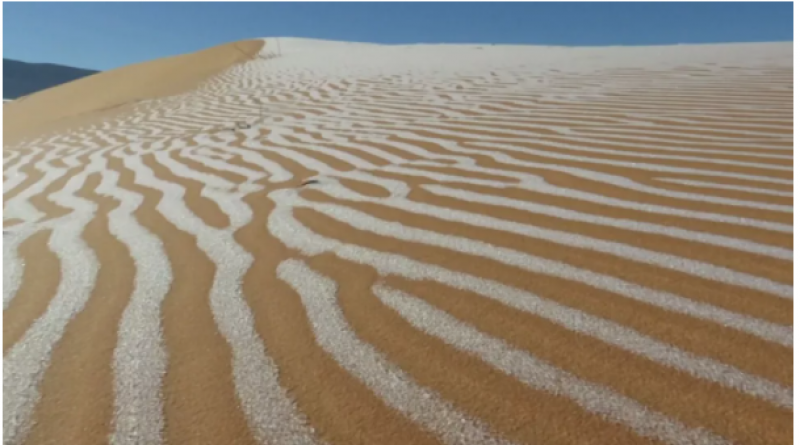 The world's largest desert rarely sees snow like this.

On Tuesday (Jan. 19), one of the world's driest places awoke to an otherworldly dusting of frost.

In the Sahara Desert of northwestern Algeria, just outside the town of Ain Sefra, sand dunes were streaked with ice crystals as far as the eye could see. Local photographer Karim Bouchetata captured the unusual weather in pictures and videos that have since made headlines around the world.

Ain Sefra sits about 3,280 feet (1,000 meters) above sea level and is surrounded by the Atlas Mountains, near the Algerian-Moroccan border. While summer temperatures in the region regularly soar above 100 degrees Fahrenheit (38 degrees Celsius), January days average a much milder 57 F (14 C), according to Sky News. Tuesday's ethereal display of frost followed a rare night of 27-F (minus 3 C) temperatures.

Snow and ice accumulation in the northern Sahara is unusual, but not unprecedented. Tuesday's dusting marks the fourth time in 42 years that Ain Sefra has seen snow, with previous occurrences in 1979, 2016 and 2018. Those past snowfalls were much heavier than this week's display; in 2018, some areas of northwestern Algeria saw up to 15 inches (40 centimeters) of snow, while the 2016 blizzard dumped more than 3 feet (1 m) in select regions, Live Science previously reported.

The Sahara is the largest hot desert in the world, stretching more than 3.3 million square miles (8.6 million square kilometers) across northern Africa between the Atlantic Ocean and the Red Sea. (Antarctica and the Arctic, which each cover more area than the Sahara, are both considered cold deserts).

The Sahara is much more likely to see snowfall at higher altitudes, such as in the Atlas Mountains, NASA said in a statement following the 2018 snow dump, which was visible from space. The Moroccan side of the Atlas Mountains also saw substantial snowfalls in 2005 and 2012, according to NASA.