How sustainability made the royals relevant again in 2021 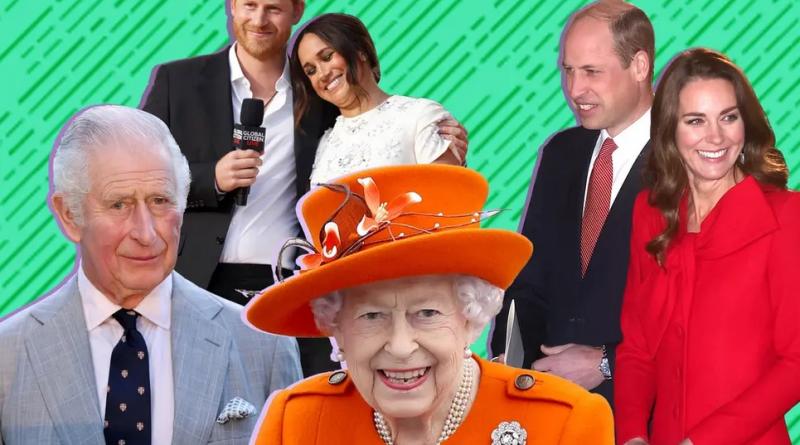 From recycling outfits to commenting on the climate crisis, has the royal family finally found a way to connect with the younger generations?

When the Duke and Duchess of Sussex got married on that balmy May day in Windsor in 2018, there was a buzz around the royal family that hadn’t been felt for a long time. After all, Meghan is bi-racial, a former actor and a divorcee, and Harry, the party boy ginger – the union had all the trappings of a modern-day fairytale. It was meant to inject new life into the royal family, but as we know, this quickly soured. When the couple made the decision to step down as senior members of “the firm” in January 2020, it seemed as if any semblance of relevance the royals still held quickly vanished along with them.

Relevance is something the royals have long chased. It was something they found when Diana married Charles, and was quickly lost again after their divorce and then her untimely death in 1997. While Diana’s relevance has soldiered on posthumously – Gen Z still looks to Diana and her oversized jumpers and cycle shorts for fashion inspiration – in the near two-and-a-half decades since her death, relevance is something the firm has been scrambling to find.

There was a glimmer of hope in 2011, following the Duke and Duchess of Cambridge’s wedding, which suggested a new path for young royals. A decade on and Prince William and Kate Middleton’s by-the-book appearances have done little to convince us of the monarchy’s relevance. Yet it seems there has been a tide change in 2021, and the Windsors have found something to make them seem on the pulse again: the climate crisis.

This year, sustainability has been front and centre of our minds as we continue our attempts to slow down the climate crisis – even William and Kate’s focus has shifted to greener things. William launched the Earthshot Prize in October, which awards innovative solutions to help repair the environment. In the lead-up to the launch he said he feared his children’s generation would still be talking about climate change in the future. “It shouldn’t be that there’s a third generation now coming along having to ramp it up even more,” he said at the time.

To the Earthshot Prize ceremony – where guests were encouraged to dress sustainably – William wore a pair of 20-year-old trousers, while Kate wore an Alexander McQueen gown she’d initially appeared in a decade earlier. While Kate has long had a habit of recycling her outfits, she’s stepped up her recycling game in 2021. When she filled in for the Queen at this year’s Remembrance Sunday service, she wore the same Alexander McQueen jacket she had worn to the service in 2018. Earlier this year, she donned her pair of Penelope Chilvers long tassel boots that she’s worn to various engagements for 17 years; and, more recently, she wore a sparkly green Jenny Packham gown to the 2021 Royal Variety Performance that she had initially worn in 2019.

While rewearing an item of clothing should be a given, research from Traid in 2018 found that, on average, an item of clothing is worn just 10 times before it is disposed of. A separate report cited by The Business of Fashion in 2019 found that one in three women in the UK consider clothing items “old” after wearing them once or twice. Fast fashion, the term for cheaply made clothes that hinge on a trend and are quickly disposed of in favour of the next, retains a firm grip on our spending habits, but Kate is using her platform to show that, really, it’s OK to wear an item more than once.

While this might not sound monumental, it’s worth remembering that often, when the duchess appears wearing an item of clothing, it will sell out. Her style is revered, and many follow her lead. For the women in the royal family – especially the young royals – fashion is a statement in a world where they can’t always express what they mean with words. For Kate to make a conscious decision to wear articles of clothing several times, she is showing her stance in favour of sustainability.

The Queen is on board with this eco-mindset too. Before Her Majesty suffered from a health setback in October, she had planned to attend the Cop26 summit in Glasgow alongside other members of the royal family. And while she wasn’t able to attend the summit in person, in a video message she told world leaders that “the time for words has now moved to the time for action”. Earlier in October, the Queen was caught expressing her frustration over climate inaction. At the opening of the Welsh parliament, she was heard on live-stream saying she was “irritated” by individuals who “talk and don’t do”.

The Queen is no stranger to eco-friendly practices. Buckingham Palace makes its own honey, the monarch has a fleet of energy-efficient hybrid cars, she famously keeps leftovers in tupperware and, in 2019, it was announced that she would stop wearing real fur too. But these recent comments show a deliberate effort to align the palace with those tackling climate change; and, perhaps, a way to appeal to the younger generations. A study from earlier this year found that Gen Z is overwhelmingly worried about the climate crisis, with 76 per cent saying it’s one of their “biggest societal concerns” and 37 per cent listing it as their biggest concern.

In the Cop26 message, the Queen gave a nod to her late husband, Prince Philip, and said she was proud that Philip’s environmental efforts “lived on” through Prince Charles and Prince William. To his credit, Charles has long been an environmentalist. His official website states that he has “used his unique position to champion action for a sustainable future” for over 50 years. In 2019, Charles launched the Sustainable Markets Initiative to help drive a shift in corporate business models, and he was awarded the GCC Global Leader of Change Award in 2017 for his contribution to global environmental preservation and protection.

Yet it was in 2021 that the heir apparent proved he would be an eco-minded King. Before he attended the Cop26 summit in November, Charles described the summit as a “last chance saloon” for world leaders and said it would be a “disaster” if the problem wasn’t tackled properly. “I mean it’ll be catastrophic,” he said. “It is already beginning to be catastrophic, because nothing in nature can survive the stress that is created by these extremes of weather.”

Sustainability has given the royals a chance to fill the hole Meghan and Harry left. It has allowed them to champion a cause they believe in, and to make a statement; and it has enabled them to connect with the younger generations. The tide may be a slow-turning one, but relevancy might just be within grasp for the royal family once again – and this time it isn’t merely to save their own skin, but the world’s.

cover photo: Sustainability has given the royals a chance to fill the hole Meghan and Harry left