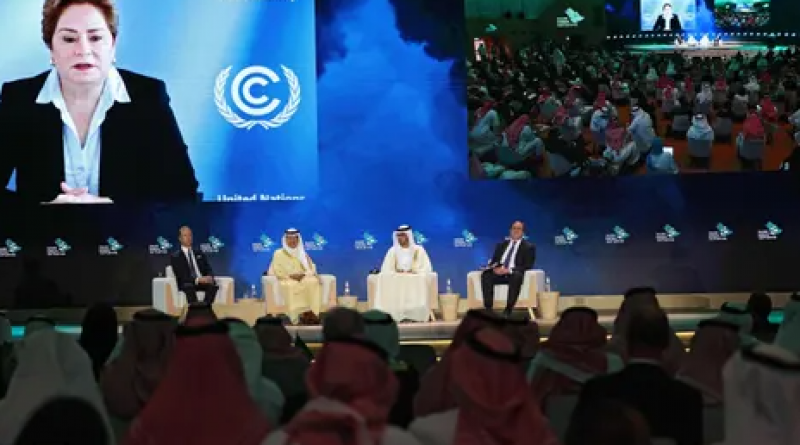 Global security and stability could break down, with migration crises and food shortages bringing conflict and chaos, if countries fail to tackle greenhouse gas emissions, the UN’s top climate official has warned ahead of the Cop26 climate summit.

Patricia Espinosa, executive secretary of the UN Framework Convention on Climate Change, said: “We’re really talking about preserving the stability of countries, preserving the institutions that we have built over so many years, preserving the best goals that our countries have put together. The catastrophic scenario would indicate that we would have massive flows of displaced people.”

The impact would cascade, she said, adding: “It would mean less food, so probably a crisis in food security. It would leave a lot more people vulnerable to terrible situations, terrorist groups and violent groups. It would mean a lot of sources of instability.”

She told the Observer in an interview: “It doesn’t only speak to the environmental side. It is also about the whole system we have built. We know what migration crises have provoked in the past. If we were to see that in even higher numbers – not only international migration, but also internal migration – [it would] provoke very serious problems.”

The unusually strong warnings from the normally reserved Espinosa comes as world leaders make their final preparations for the Cop26 talks in Glasgow. The leaders of the G20 nations of the world’s largest developed and developing economies will gather in Rome next weekend for two days of preliminary talks, then fly to Glasgow, to join about 100 other heads of government for the Cop26 climate talks on 1 November.

Espinosa, a former minister in the Mexican government took on the UN climate role in 2016. She shares primary responsibility for the talks with Alok Sharma, the UK cabinet minister who will act as president. Over two weeks, they will try to bring nearly 200 countries together to implement the goals of the landmark 2015 Paris climate agreement, by agreeing stiff cuts to greenhouse gas emissions in the next decade.

Some key leaders – including Xi Jinping, president of China, now the world’s biggest emitter of carbon dioxide, and Russia’s Vladimir Putin – are unlikely to attend. Espinosa said these absences would not prevent a successful outcome, adding: “Not all countries are going to be represented at head of state level. I don’t have any information about President Xi’s presence but I continue to engage with the Chinese delegation, and there is very important engagement by China in the process.”

So far, the commitments countries have made to reduce emissions fall short of the 45% cut, based on 2010 levels, that scientists say is needed by 2030 to limit global heating to 1.5C above pre-industrial levels, the tougher and safer of the two goals in the Paris accord. Espinosa said: “What we need to get at Glasgow are messages from leaders that they are determined to drive this transformation, to make these changes, to look at ways of increasing their ambition.”

She also held out the possibility that if a shortfall remains at Glasgow, as is likely, between necessary and offered cuts, nations could be asked to revise their plans soon after – though that is likely to be unpopular with many. Under the Paris agreement, revisions are supposed to take place every five years – it is six this time as Cop26 was delayed by a year because of Covid – but experts believe this is too long, as emissions are still rising and the 1.5C target will slip out of reach unless sharp cuts are made this decade.

“It is probably not the most attractive idea to government representatives – when you have finished the plan, come back and tell all those involved, ‘OK, now you have to continue revising your plan’’,” she said. “But this is the biggest challenge humanity is facing, so we really don’t have an option. And we know that situations change, technologies change, processes change, so there’s always room for improvement.”

Another key concern is the volume of administration and technical details countries must wade through. Six years after it was signed, some aspects of the Paris agreement have yet to come into force, because of disagreements over details.

These include a system of carbon trading, and the rules by which countries should account for the emissions they produce. There are 136 such agenda items to be discussed at Cop26, many of them carried over from previous inconclusive talks, and, although virtual negotiations took place online for three weeks this spring, no formal decisions can be made until countries meet in-person in Glasgow.

“The huge challenge is that because of the lack of possibility of meeting in person, formal negotiations have not started. So we have a lot of work to do, and very little time,” she said.

There are no real climate leaders yet – who will step up at Cop26?

COP26: What is the Glasgow climate conference and why is it important?