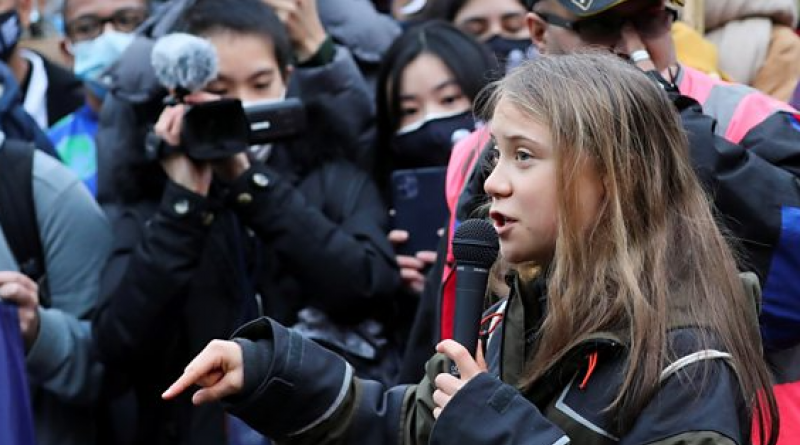 The arrival of world leaders in Glasgow for the COP26 summit triggered a series of demos across the city.

The gathering attended by Ms Thunberg was one of dozens taking place.

She told fellow activists from "Fridays for Future" that change would not come from politicians at the summit but from individuals showing leadership.

The Greenpeace ship Rainbow Warrior was sailing up the Clyde, with plans to dock near the conference venue.

Demonstrations by French and Tamil groups were being held south of the River Clyde.

The heads of 120 countries arrived for the talks, including US President Joe Biden and French President Emmanuel Macron.

About 25,000 delegates will be attending the two-week climate conference in the UN-controlled blue zone on the north side of the River Clyde.

Many different groups from across the globe will be using the opportunity to make their voices heard as the attention of the world is on Glasgow during the pandemic-delayed summit.

Ms Thunberg was one of the environmental activists speaking at the "Fridays for Future" meeting of young activists at Festival Park, near the COP26 campus.

"Change is not going to come from inside there. That is not leadership - this is leadership."

"We're sick and tired of it and we're going to make the change whether they like it or not," she added.

Lang Banks, director of WWF Scotland told BBC Scotland's Drivetime he agreed with Ms Thunberg that politicians were not fulfilling their pledges, such as the promise of $100bn to help poorer nations cut emissions by 2020.

He said: "The world leaders have not stepped up to the plate. They have an opportunity now to turn their warm words we've heard today into action.

"We cannot allow them to leave Glasgow without making sure that we are somehow closer to making sure the planet does not burn, and does not warm above 1.5C." 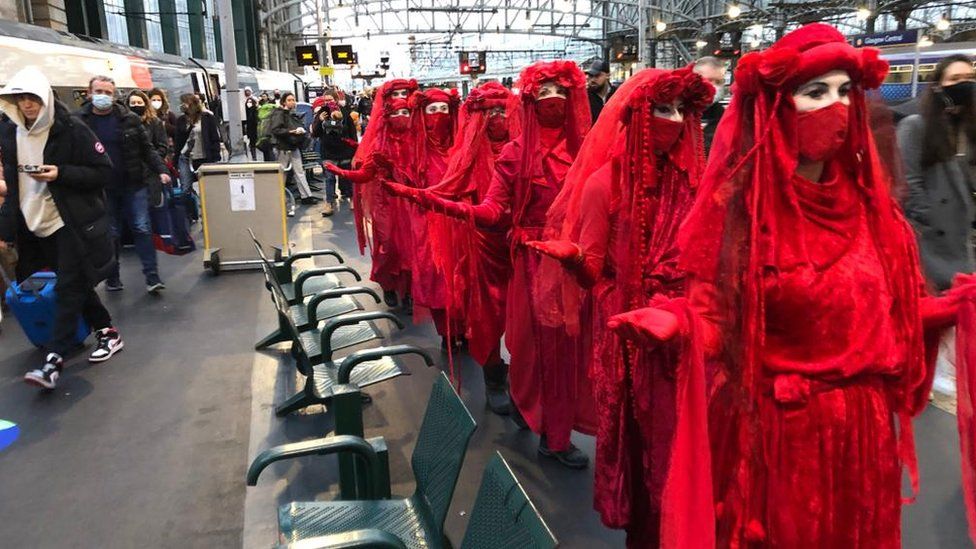 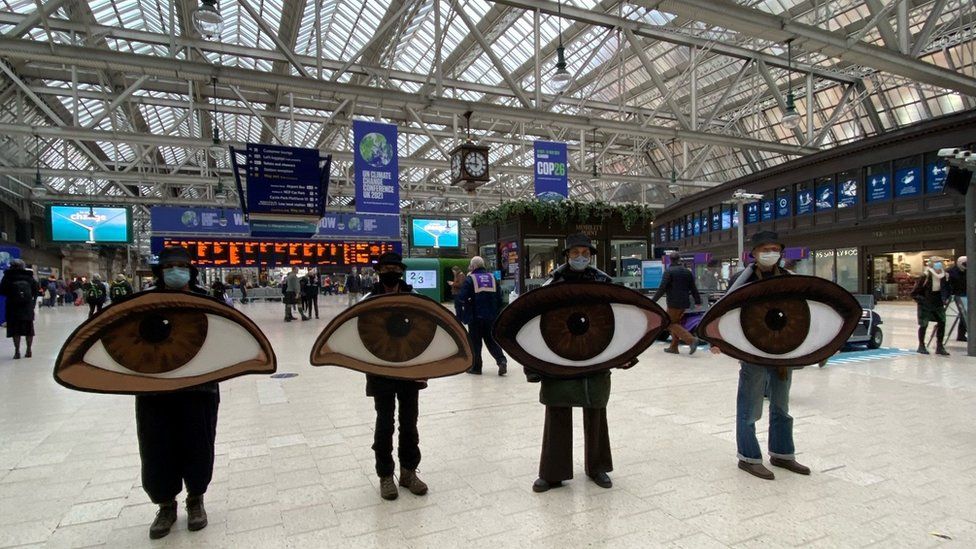 Protesters from Extinction Rebellion made this point directly at Glasgow Central Station, where a small group welcomed conference delegates arriving by train.

The group held up large eyes with signs warning the delegates that they represented the "world's eyes on you".

The Erskine Bridge was closed at short notice, stopping traffic for 90 minutes, to allow the vessel to pass.

After uncertainty over whether it would be allowed to enter the city, Greenpeace said the vessel was given permission to dock at Govan.

It eventually moored at the King George V docks at Shieldhall, downriver from the summit venue.

Assistant Chief Constable Gary Ritchie of Police Scotland said it was outside of the exclusion zone, and the ship had not breached any COP26 restrictions.

Activists travelling on the ship, including Edwin Namakanga from Uganda, hope to send a message to world leaders.

He told BBC Radio Scotland: "We have had a lot of UN climate summits but they have all failed.

"We believe if this COP includes more people from the most affected nations of the world, there will be more hope for change, with leaders not just speaking but at least taking some action before it is too late." 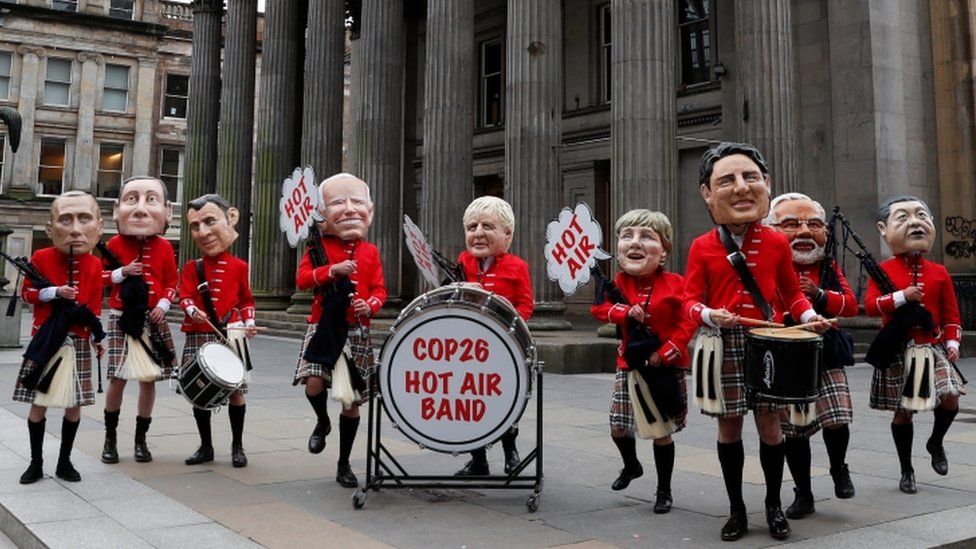 Angela Merkel, Boris Johnson, Emmanuel Macron, Joe Biden were all caricatured in the band which Oxfam said was guaranteed to produce a "lot of hot air".

Jacobo Ocharan, from the group's global climate initiative, said: "I'm here because we are trying to convince world leaders that this is one of the last opportunities to change the track of the climate crisis."

Back in June, the police said they'd identified four groups of people who might protest at COP26.

The first was the general public. People of all ages who want to make their voices heard. We can expect to see them in their tens of thousands when the COP26 Coalition holds its march and rally in Glasgow.

Then there's the seasoned activists of groups like Extinction Rebellion who use what they call "non-violence direct action" to highlight their cause.

The police said it was possible there could be disorder - that a very small minority of protesters would become violent. Thousands of officers have been given public order training just in case.

And the last group was people who would come to COP26 to protest against the presence of some of the world leaders. So far, it's their voices that have been the loudest.

A large demonstration has been taking place on the other side of the Clyde opposite the conference venue, with members of the UK's Tamil community protesting against Sri Lanka's prime minister.

A demonstration organised by the National Council of Resistance of Iran (NCRI), calling for regime change in Iran, was being held in George Square.

Hossein Abedini, the NCRI's UK deputy director, said he was in Glasgow to protest against Iranian President Ebrahim Raisi and other officials who had "committed crimes against humanity".

He added: "The families of victims of executions are here today to ask the world leaders to stand on the side of the Iranian people and prosecute Ebrahim Raisi and other officials in the Iranian regime." 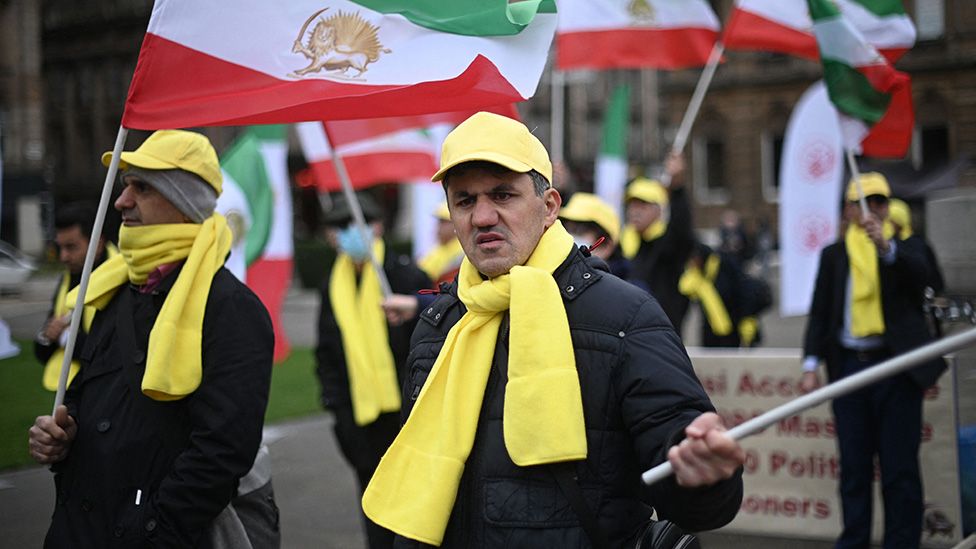 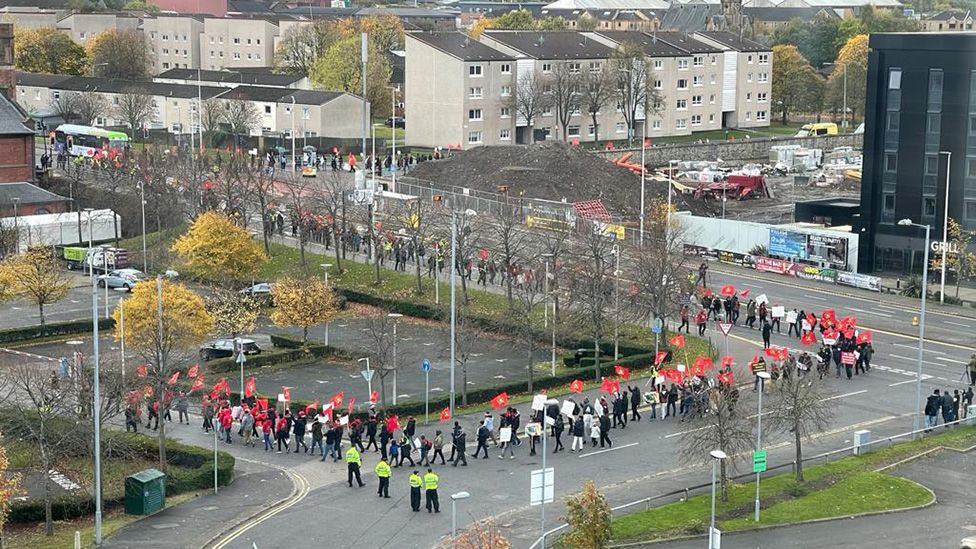 In Finnieston, a group of Ugandan campaigners gathered to hold a protest against the country's president, Yoweri Museveni.

Along the southern edge of the conference campus, protests were also held by French and Tamil groups.

Tamil activists lined the south side of the River Clyde directly across the from COP26, waving flags to protest against Sri Lanka's prime minister.

And French demonstrators gathered on the Clyde Arc to accuse the French president of supporting the fossil fuel industry.