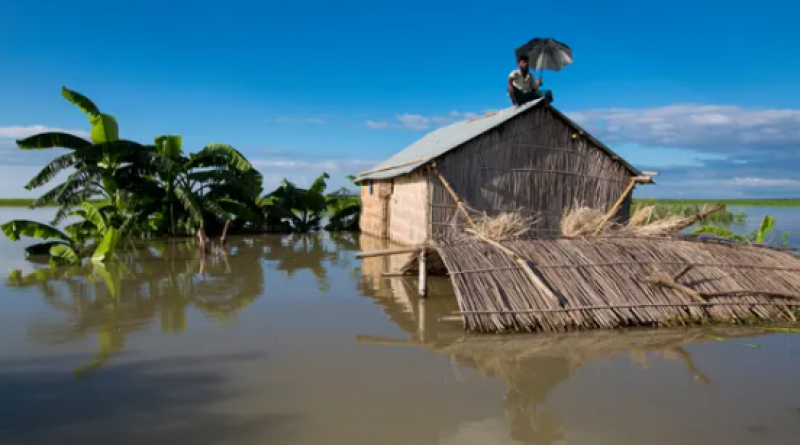 Droughts and floods forcing workers from rural areas, leading to their exploitation in cities, report warns

Millions of people forced to leave their homes because of severe drought and powerful cyclones are at risk of modern slavery and human trafficking over the coming decades, a new report warns.

The climate crisis and the increasing frequency of extreme weather disasters including floods, droughts and megafires are having a devastating effect on the livelihoods of people already living in poverty and making them more vulnerable to slavery, according to the report, published today.

Researchers from the International Institute for Environment and Development (IIED) and Anti-Slavery International found that drought in northern Ghana had led young men and women to migrate to major cities. Many women begin working as porters and are at risk of trafficking, sexual exploitation and debt bondage – a form of modern slavery in which workers are trapped in work and exploited to pay off a huge debt.

One woman, who migrated to Accra from northern Ghana, used to farm until the land was ruined by flooding and she was forced to move. For seven years she has worked as a porter (kayayie), carrying items on her head.

She said: “Working as a kayayie has not been easy for me. When I came here, I did not know anything about the work. I was told that the woman providing our pans will also feed us and give us accommodation. However, all my earnings go to her and only sometimes will she give me a small part of the money I’ve earned.”

She dropped a customer’s items once and had to pay for the damage, which she could not afford. The woman in charge paid up on condition that she repay her. She added: “I have been working endlessly and have not been able to repay.”

In the Sundarbans, on the border between India and Bangladesh, severe cyclones have caused flooding in the delta, reducing the land available for farming. With countries in the region tightening immigration restrictions, researchers found that smugglers and traffickers operating in the disaster-prone region were targeting widows and men desperate to cross the border to India to find employment and income. Trafficking victims were often forced into hard labour and prostitution, with some working in sweatshops along the border.

Fran Witt, a climate change and modern slavery adviser at Anti-Slavery International, said: “Our research shows the domino effect of climate change on millions of people’s lives. Extreme weather events contribute to environmental destruction, forcing people to leave their homes and leaving them vulnerable to trafficking, exploitation and slavery.”

The World Bank estimates that, by 2050, the impact of the climate crisis, such as poor crop yields, a lack of water and rising sea levels, will force more than 216 million people across six regions, including sub-Saharan Africa, south Asia and Latin America, from their homes.

The report is a stark warning to world leaders in advance of the Cop26 UN climate summit in Glasgow in November and calls on them to make sure efforts to address the climate emergency also tackle modern slavery. The report says labour and migrant rights abuses are disregardedin the interests of rapid economic growth and development.

Ritu Bharadwaj, a researcher for the IIED, said: “The world cannot continue to turn a blind eye to the forced labour, modern slavery and human trafficking that’s being fuelled by climate change. Addressing these issues needs to be part and parcel of global plans to tackle climate change.”

Is there a link between climate change and child slavery in West Africa?

The Nigerian environmentalist helping children look after the planet