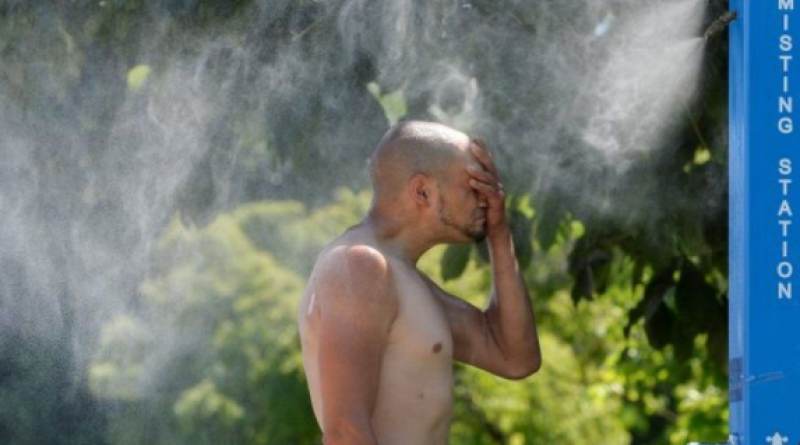 Canada has recorded its highest ever temperature as the country's west and the US Pacific north-west frazzle in an unprecedented heatwave.

A "heat dome" of high pressure parked over the region has set new records in many other areas.

The US and Canada have both warned citizens of "dangerous" heat levels that could persist this week.

Experts say that climate change is expected to increase the frequency of extreme weather events, such as heatwaves. However, linking any single event to global warming is complicated.

The high pressure zone is huge, from California right up to Canada's Arctic territories and stretching inland through Idaho.

There has been a run on air-conditioners and fans, and cooling shelters have sprung up. Some bars and restaurants - and even at least one swimming pool - were deemed too hot to function.

Lytton, which is about 150 miles (250km) north-east of Vancouver, surged past the previous Canadian record.

Lytton was not alone. More than 40 other spots in British Columbia set new records.

Environment Canada senior climatologist David Phillips told CTV: "I like to break a record, but this is like shattering and pulverising them. It's warmer in parts of western Canada than in Dubai."

He said there was a chance of topping 47C somewhere.

British Columbia's power providers said there had been a surge in demand for electricity to keep air-conditioners running.

Environment Canada said Alberta, and parts of Saskatchewan, Yukon and the Northwest Territories, should also be on alert.

In its warning, it forecast a "prolonged, dangerous, and historic heatwave will persist through this week", with temperatures 10C-15C above normal, at near 40C in many places. 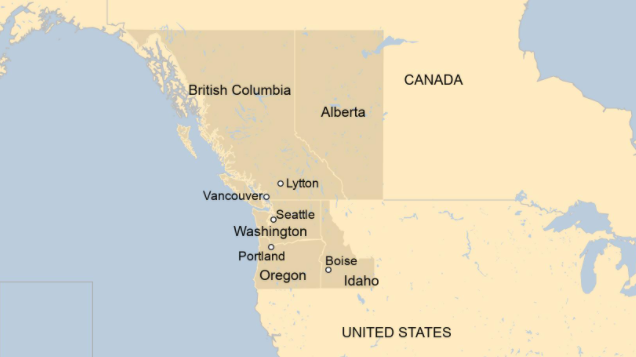 'Historic' heat in US north-west

The Pacific north-west has also been breaking records, particularly in parts of Washington and Oregon states.

The US National Weather Service called the heatwave conditions "historic" and said they would persist through the week, "with numerous daily, monthly and even all-time records likely to be set".

Seattle and Portland, often the target of jokes about rainy climates, could be among those setting their hottest temperatures on Monday. Both have already surpassed 40C.

Oregon eased Covid attendance restrictions to open up swimming pools and air-conditioned areas like shopping centres. But Seattle in Washington had to close one pool because of "unsafe, dangerous pool deck temperatures".

Fruit growers have been rushing to pick crops, fearing the heat could shrivel cherries and other fruit. Pickers have been starting at dawn and stopping at lunchtime in the unbearable temperatures.

BJ Thurlby, president of the Northwest Cherry Growers, told the Seattle Times: "We are travelling in absolutely uncharted waters."

The US track and field Olympic qualifying trials had to be halted in Eugene, Oregon, on Sunday, as the crowd was told to leave the stadium for safety reasons.

Some Covid vaccination centres also closed because of the heat.

Some areas along the coast could cool a little later in the week, but Boise, Idaho, could see a week of 40C+ temperatures. The National Weather Service said parts of the state could suffer "one of the most extreme and prolonged heatwaves in the recorded history of the Inland Northwest".

The warnings for all were to stay hydrated, avoid strenuous activities, and check on vulnerable neighbours.

We can't say for certain this brutal heatstorm has been caused by emissions from industrial society, but it's exactly the sort of extreme scientists have warned of as CO2 levels continue to rise.

In fact scientists have got much better at linking some extreme events to climate change, such as the heatwave that scorched Europe in 2019, which researchers say was made 100 times more likely due to CO2.

What's extra-concerning is that these temperatures have been reached with global temperatures just 1.1 C above preindustrial times.

Science body, the Intergovernmental Panel on Climate Change, judges that we're likely to exceed 1.5C above that level before long. And at current rates we will overshoot a 2C rise - possibly higher.

Yet China and India continue to build new coal-fired power stations. And the G7 - Canada, France, Germany, Japan, the UK and the US - won't give a date to phase them out.

The UK and others are still drilling for more oil and gas to burn, saying it'll be needed to 2050.