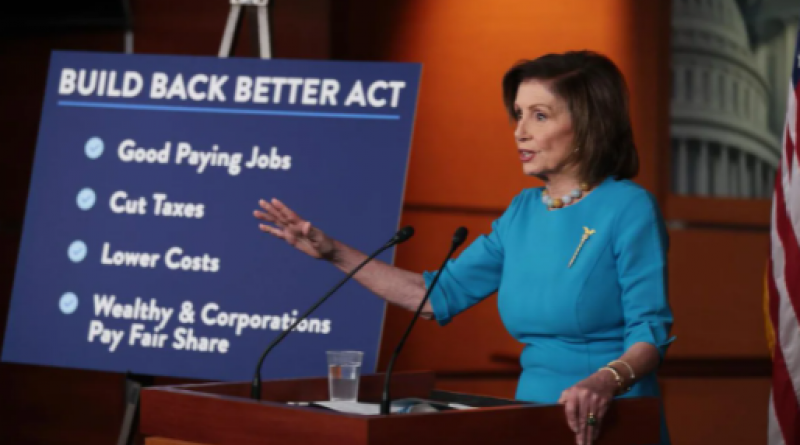 The legislation still needs to pass the Senate to make a difference.

The U.S. House of Representatives on Friday passed the Build Back Better Act, which includes the largest-ever federal investment in fighting the climate crisis.

The $2.2 trillion spending package includes $555 billion in spending to encourage the transition away from fossil fuels, The New York Times reported, but the legislation still needs to pass the Senate to make a difference.

"Today, the House delivered on the strongest climate action in history — and not a minute too soon. The climate clock is ticking. It's time for the Senate to get this done," Natural Resources Defense Council CEO and President Manish Bapna said in a statement. "This bill calls for the most significant U.S. climate investment ever. It's the centerpiece of a broader strategy to confront the climate crisis by slashing carbon pollution in a way that creates high-quality jobs, drives innovation and sets the table for durable growth."

The climate spending promised in the bill is less than the original $600 billion in the original plan, but still makes up the largest spending category in the bill, CNBC reported. It is not enough on its own to fulfill President Joe Biden's promise, made at the COP26 climate conference in Glasgow this month, to reduce U.S. greenhouse gas emissions by half of 2005 levels by 2030, but it is still the most ambitious piece of climate legislation in U.S. history, The New York Times reported.

"The Build Back Better World is going to show that we can grow our economies, fight climate change, and leave a better, cleaner, more livable planet for all of our children," Biden said in Glasgow, as CNBC reported.

The bill's important climate provisions include:

Another key component of the bill is environmental justice; it includes $105 billion for reducing pollution in low-income communities, Common Dreams reported.

"The substantial investments the Build Back Better Act makes in predominantly Black, Brown and Indigenous communities that continue to suffer from systemic discrimination and disproportionate amounts of pollution marks a turning point in Congress' recognition of the environmental injustices and the loss of land and capital that these communities have suffered," Union of Concerned Scientists President Johanna Chao Kreilick said in a statement emailed to EcoWatch.

The eyes of environmental advocates now turn to the Senate, where there are concerns that centrist Democrats Sen. Joe Manchin of West Virginia and Sen. Kyrsten Sinema of Arizona could derail their party's efforts. The two have not yet endorsed the bill's framework, and Manchin already managed to kill the clean electricity program in the original version of the bill during earlier negotiations, as CNBC explained. This provision would have both incentivized energy companies to shift away from fossil fuels and penalized companies that did not.

"We'd be lying if we said the Build Back Better Act passing the House was not a historic moment for climate action, but it means nothing if the Senate does not pass it. The Senate better pass the damn bill," Sunrise Movement Executive Director Varshini Prakash said in a statement. "Progressives have made enough compromises. We've fought hard to defend the President's popular agenda, while Democratic leadership allowed fossil-fuel-funded Senators Manchin and Sinema to water this bill down from its original, transformative promise. President Biden and Senator Schumer must get their party in line, not cower to corporate Democrats, and pass the full Build Back Better Act through the Senate immediately. There are no excuses left."

Government criticised for including big polluters in ‘Build Back Better Council’.

Investors to governments: Build back better, or deal with escalating climate risks.

Over 150 organisations urge UK Government to align with SDGs to build back better.