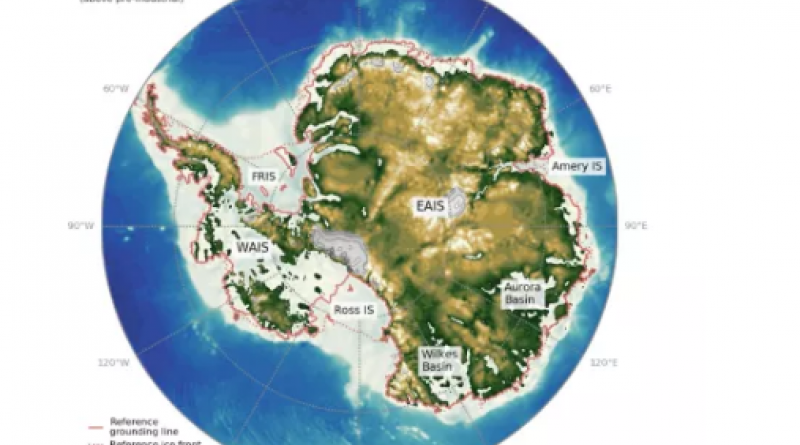 The change will take thousands of years, but we only have a century to stop it.

Antarctica contains more than half of the world's freshwater in its sprawling, frozen ice sheet, but humanity's decisions over the next century could send that water irreversibly into the sea.

If global warming is allowed to continue unchecked, Antarctica will soon pass a "point of no return" that could reduce the continent to a barren, ice-free mass for the first time in more than 30 million years, according to a new study published Sep. 23 in the journal Nature.

"Antarctica is basically our ultimate heritage from an earlier time in Earth's history. It's been around for roughly 34 million years," study co-author Anders Levermann, a researcher at the Potsdam Institute for Climate Impact Research (PIK) in Germany, said in a statement. "Now our simulations show that once it's melted, it does not regrow to its initial state [until] temperatures go back to pre-industrial levels … a highly unlikely scenario. In other words: What we lose of Antarctica now, is lost forever."

In the study, PIK researchers ran computer simulations to model how Antarctica will look thousands of years from now, depending on how high average global temperatures rise in response to modern greenhouse gas emissions.

They found that, if average temperatures rise 7.2 degrees Fahrenheit (4 degrees Celsius) above pre-industrial levels for any sustained period of time, much of the ice in West Antarctica will crumble, resulting in 21 feet (6.5 meters) of global sea-level rise; that amount of rise would devastate coastal cities like New York, Tokyo and London. This scenario could be a reality within decades; a global average temperature rise of 9 F (5 C) is currently considered the “worst-case” warming scenario if current greenhouse gas emission levels are allowed to continue through the year 2100, according to the UN’s Intergovernmental Panel on Climate Change (IPCC).

If those IPCC projections are off, things could get much, much worse, the authors of the new study found. Should global temperatures rise between 11 and 16 F (6 to 9 C) above pre-industrial levels for any sustained period of time over the coming millennia, more than 70% of Antarctica's present-day ice will be lost "irreversibly," the study authors wrote. And, if temperatures rise by 18 F (10 C), the continent is doomed to be "virtually ice-free." Should the continent lose all of its ice, global sea levels will rise by nearly 200 feet (58 m).

A short video accompanying the study (shown here) illustrates that reality in grim detail, showing the continent's ice vanishing first from the coasts, then all across the mainland until nothing but green plains and rocky cliffs remains.

This cataclysmic melting will not occur in our lifetimes; the full effects would likely not be seen for roughly 150,000 years, Andrew Shepherd, a climatologist from the University of Leeds in the United Kingdom, who was not involved in the study, told the Daily Mail.

However, the study authors warned, humankind's failure to reduce greenhouse gas emissions this century could trigger an irreversible feedback cycle that seals Antarctica's fate for millennia to come.

The rapid depletion of Antarctica's ice shelves — large plates of ice anchored to the mainland on one side and floating freely over the ocean on the other — represent one particularly dangerous feedback mechanism, the researchers wrote. As warm ocean water laps against the underside of ice shelves, the point where the base of the shelf meets the water (also called the grounding line) retreats farther and farther back, destabilizing the entire shelf and allowing enormous chunks of ice from the mainland to slide into the ocean. Many ice shelves in West Antarctica are already experiencing this sort of runaway melt, with roughly 25% of the region's ice in danger of collapsing, according to a 2019 study in the journal Geophysical Research Letters.

Antarctica's fate is in the hands of current policymakers, the study authors concluded. The Paris Climate Accord, which 73 nations agreed to in 2015 (and which the United States abandoned in June 2017 at the behest of President Donald Trump), aims to limit the planet's average temperature from rising by more than 2.7 F (1.5 C) above the preindustrial average, to forestall the worst effects of climate change.

While emissions dropped by a trivial amount earlier this year, due to mass quarantining during the pandemic, a UN report published earlier this month warns that the world is currently not on track to meet the goals laid out in the Paris Accord, with average global temperatures lingering around 2 F (1.1 C) above pre-industrial levels between 2016 and 2020.

The report added that there's a 20% chance the annual global mean temperature will have increased by more than 2.7 F (1.5 C), at least temporarily, by the year 2024.