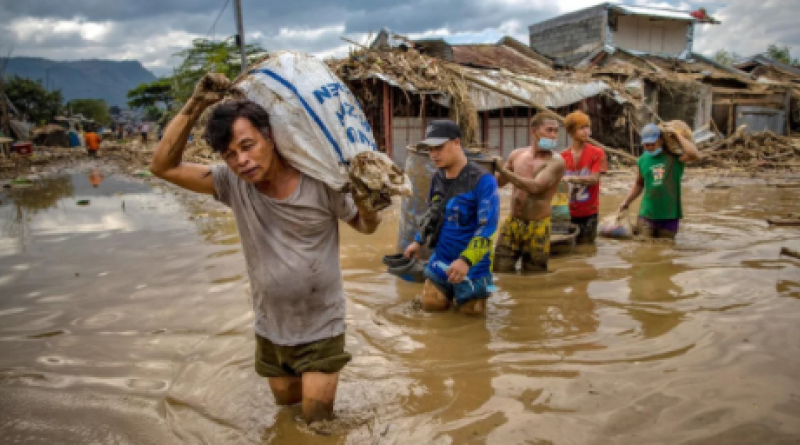 The world's largest humanitarian network warned Wednesday that urgent international action is needed to address the rising risk of climate-related displacement, highlighting data that shows disasters such as storms, droughts, fires, and floods internally displaced more than 10 million people from September to February.

"In just the last six months, there have been 12.6 million people internally displaced around the world and over 80% of these forced displacements have been caused by disasters, most of which are triggered by climate and weather extremes," said Helen Brunt of the International Federation of Red Cross and Red Crescent Societies (IFRC).

"Asia suffers much more than any other region from climate disaster-related displacements," noted Brunt, IFRC's Asia Pacific Migration and Displacement coordinator. "These upheavals are taking a terrible toll on some of the poorest communities already reeling from the economic and social impacts of the Covid-19 pandemic."

The new report, Responding to Disasters and Displacement in a Changing Climate, draws data from the Internal Displacement Monitoring Center. According to the IDMC, about 2.3 million displacements over the past six months are related to conflict compared with 10.3 million due to disasters. 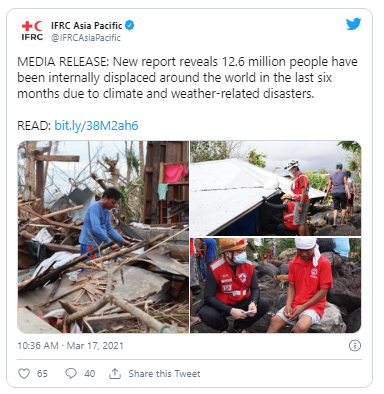 The report details how the IFRC has responded to various humanitarian needs across Asia, with case studies about assisting communities affected by drought in Afghanistan; seasonal cyclones and monsoon rains, which lead to flooding and landslides, in Bangladesh; and a dzud, a term for extreme winter conditions that cause mass livestock loss, in Mongolia.

The network also dedicates a section to the Philippine Red Cross's efforts to adopt a strategic approach to housing, land, and property rights for displaced communities.

"We are seeing an alarming trend of people displaced by more extreme weather events such as Typhoon Goni, the world's most ferocious storm last year, that smashed into the Philippines," said Brunt. "Three storms hit the Philippines in as many weeks, leaving over three million people destitute."

More broadly, she added, "We need greater action and urgent investment to reduce internal displacement caused by the rising risk of disasters. Investing much more in local organizations and first responders is critical so they have the resources needed to protect lives, homes, and their communities."

"Things are getting worse as climate change aggravates existing factors like poverty, conflict, and political instability," Brunt told Reuters. "The compounded impact makes recovery longer and more difficult: people barely have time to recover and they're slammed with another disaster."

While the IFRC's report focuses on internal displacement — meaning individuals who remain within their home countries — recent climate-related disasters have also generated calls for just and updated policies related to refugees.

Last month, a report from Kayly Ober, senior advocate and program manager for the Climate Displacement Program at Refugees International, provided the Biden administration with a policy roadmap, declaring that "the United States has a moral and practical responsibility to lead on issues of climate change, migration, and displacement."

"Yes, we should invest in climate change adaptation and resilience measures, because it enables people to stay in place if they would like to," Ober told Common Dreams. "But we also need to understand that people are already on the move and will continue to be on the move, especially as climate change impacts increase in intensity and frequency."

An analysis released last year by the Sydney-based Institute for Economics & Peace found that as the global population climbs toward 10 billion by 2050, ecological disasters and armed conflict could forcibly displace about 10% of humanity.