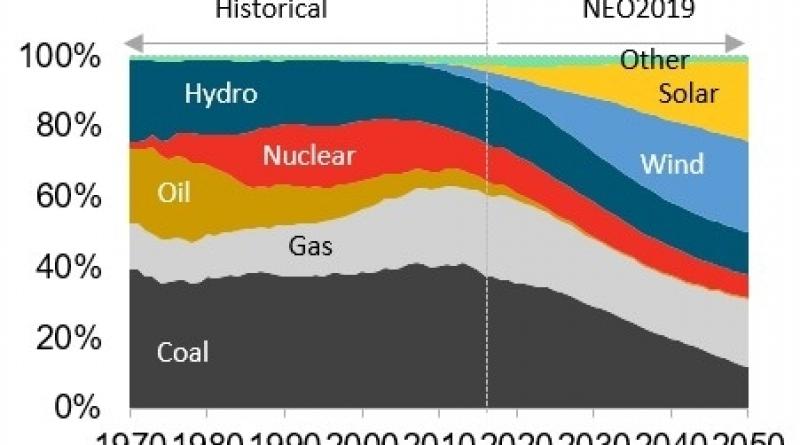 Low-cost renewables and batteries can put world on a path over the next decade compatible with 2 degrees Celsius. Staying on that path from the 2030s will be another challenge according to BloombergNEF.

Deep declines in wind, solar and battery technology costs will result in a grid nearly half-powered by renewable energy by 2050, according to the latest projections from BloombergNEF (BNEF). In its New Energy Outlook 2019 (NEO), BNEF sees these technologies ensuring that – at least until 2030 – the power sector contributes its share toward keeping global temperatures from rising more than 2 degrees Celsius.

Each year, NEO compares the costs of competing energy technologies through a levelized cost of energy analysis. This year, the report finds that, in approximately two-thirds of the world, wind or solar now represent the least expensive option for adding new power-generating capacity. Electricity demand is set to increase 62%, resulting in global generating capacity almost tripling between 2018 and 2050. This will attract $13.3 trillion in new investment.

NEO starts by analyzing technology trends and fuel prices to build a least cost view of the changing electricity sector. The results show coal's role in the global power mix falling from 37% today to 12% by 2050 while oil a as a power-generating source is virtually eliminated.  Wind and solar grow from 7% of generation today to 48% by 2050.  The contributions of hydro, natural gas, and nuclear remain roughly level on a percentage basis.

Matthias Kimmel, NEO 2019 lead analyst, said: “Our power system analysis reinforces a key message from previous New Energy Outlooks – that solar photovoltaic modules, wind turbines and lithium-ion batteries are set to continue on aggressive cost reduction curves, of 28%, 14% and 18% respectively for every doubling in global installed capacity. By 2030, the energy generated or stored and dispatched by these three technologies will undercut electricity generated by existing coal and gas plants almost everywhere.”

The projected growth of renewables through 2030 indicates that many nations can follow a path for the next decade and a half that is compatible with keeping the increase in world temperatures to 2 degrees or less. And they can do this without introducing additional direct subsidies for existing technologies such as solar and wind.

“The days when direct supports such as feed-in tariffs are needed are coming to an end,” said Elena Giannakopoulou, head of energy economics at BNEF. “Still, to achieve this level of transition and de-carbonization, other policy changes will be required – namely, the reforming of power markets to ensure wind, solar, and batteries are renumerated properly for their contributions to the grid. NEO is fundamentally policy-agnostic, but it does assume that markets operate rationally and fairly to allow lowest-cost providers to win.”

92 percent renewable power in Europe by 2050

Europe will decarbonize its grid the fastest with 92% of its electricity supplied by renewables in 2050. Major Western European economies in particular are already on a trajectory to significantly decarbonize thanks to carbon pricing and strong policy support. The U.S., with its abundance of low-priced natural gas, and China, with its modern fleet of coal-fired plants, follow at a slower pace.

China sees its power sector emissions peaking in 2026, and then falling by more than half in the next 20 years. Asia’s electricity demand will more than double to 2050. At $5.8 trillion, the whole Asia Pacific region will account for almost half of all new capital spent globally to meet that rising demand. China and India together are a $4.3 trillion investment opportunity. The U.S. will see $1.1 trillion invested in new power capacity, with renewables more than doubling its generation share, to 43% in 2050.

The outlook for global emissions and keeping temperature increases to 2 degrees or less is mixed, according to this year’s NEO. On the one hand, the build-out of solar, wind and batteries will put the world on a path that is compatible with these objectives at least until 2030. On the other hand, a lot more will need to be done beyond that date to keep the world on that 2 degree path.

One reason is that wind and solar will be capable of reaching 80% of the electricity generation mix in a number of countries by mid-century, with the help of batteries, but going beyond that will be difficult and will require other technologies to play a part – with nuclear, biogas-to-power, green hydrogen-to-power and carbon capture and storage among the contenders.

BNEF’s NEO director, Seb Henbest commented: “Our analysis suggests that governments need to do two separate things – one is to ensure their markets are friendly to the expansion of low-cost wind, solar and batteries; and the other is to back research and early deployment of these other technologies so that they can be harnessed at scale from the 2030s onwards.”

In NEO 2019, BNEF for the first time considers 100% electrification of road transport and the heating of residential buildings, leading to a significant expansion of power generation's role.

Under such this projection, overall electricity demand would grow by a quarter compared to a future in which road transport and residential heat only electrify as far as assumed in the main NEO scenario. Total generation capacity in 2050 would have to be three times the size of what is installed today. Overall, electrifying heat and transport would lower economy-wide emissions, saving 126GtCO2 between 2018 and 2050.

NEO 2019 is the result of a detailed study of the outlook for energy demand and supply, country-by-country, conducted by 65 BNEF analysts around the world. It draws on BNEF’s market-leading work on the evolving economics of different generation sources. (HCN)