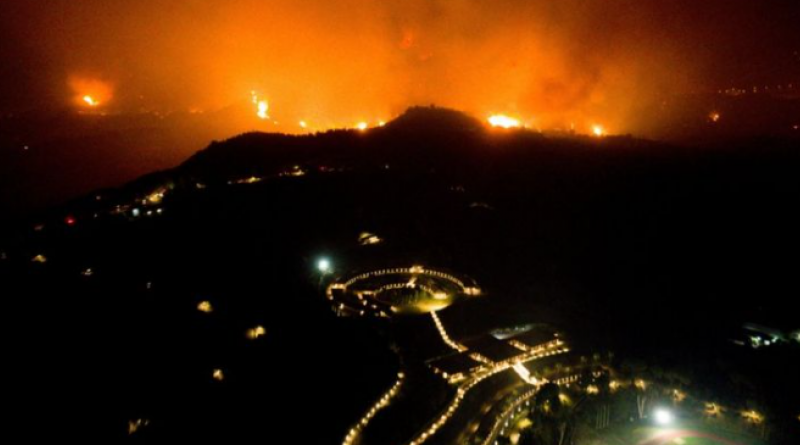 Emergency services are working hard to deal with destructive fires across Southern Europe which have been fuelled by strong winds and soaring heatwave temperatures.

The blazes have been raging for over a week and parts of Turkey, Greece, Spain and Italy have been affected.

It's the worst fire crisis Turkey has experienced in a decade, as coastal resorts have been hit and tourists have had to be evacuated to safety.

On Monday Turkish authorities said more than 130 blazes had been contained as firefighting efforts continued.

Italy's national fire service said it had to deal with more than 1,500 flare-ups across the country on Sunday.

In the eastern city of Pescara, at least five people were injured after a fire forced the evacuation of hundreds from beach resorts and homes.

In Greece, five villages have been evacuated in the Peloponnese region, where temperatures are expected to reach up to 45C this week.

The disasters in Turkey and Greece have been linked by officials and experts to increasingly frequent and intense weather events caused by climate change.

The European Union (EU) has sent help to a number of countries including Italy and Greece in the form of planes, helicopters and firefighters.

What is happening in Turkey?

The worst fires have occurred along Turkey's Mediterranean and Aegean coasts - a major tourist region.

More than 120 fires have now been brought under control, but local and international firefighters are still battling another seven blazes.

Over the weekend videos showed tourists being evacuated from beach resorts by boat, with Turkish Coastguard vessels involved in rescue operations.

Turkish media said firefighters in planes and helicopters resumed their operations in the south-western towns of Marmaris and Koycegiz on Monday.

Investigators are trying to establish whether some of the fires were started deliberately.

People living in one affected town - Turunc, near Marmaris - have been working together to help firefighters by supplying crews with food, drinks, clothing and protective equipment.

Greece has been facing its most severe heatwave in 30 years with temperatures reaching above 40C in several places.

Last week an area north of the Greek capital Athens was hit by a forest fire which ripped through a pine forest, destroying homes and businesses, and forced the evacuation of villages.

Wildfires have also been raging on the Greek island Evia, north of Athens.

Residents and tourists were forced to leave by boat as wildfire spread quickly, destroying homes.

Forest fires are a common occurrence in Greece in summer but there are concerns that climate change is worsening the situation.

People in the Samanta area, 30km (18 miles) north of Athens were evacuated. Others were warned to keep doors and windows closed and to stay inside due to thick clouds of smoke.

Smoke from the fire was spotted over Athens, limiting visibility in some parts of the capital.

Water-dropping planes and helicopters were used to help 300 firefighters contain the blaze.

The fire outside Athens has now been brought under control by firefighters.