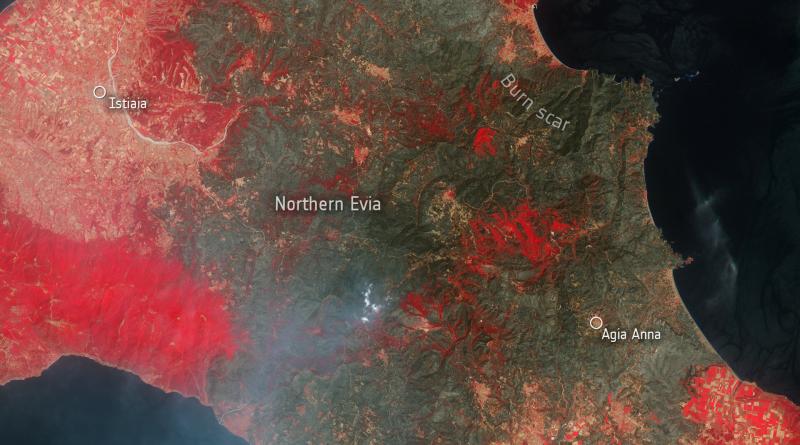 Parts of the Mediterranean and central Europe have experienced extreme temperatures this summer, with wildfires causing devastation in both Turkey and Greece. The blaze on Evia, Greece’s second-largest island, is one of the worst hit with fires having burned down large forested areas, homes and businesses – forcing thousands to evacuate by sea to save their lives.

This false-colour Copernicus Sentinel-2 image was captured yesterday on 11 August, and has been processed in a way that included the near-infrared channel which is usually used to highlight vegetation (visible in bright red). The image shows the extent of the burned area (visible in shades of brown and green) in the northern part of the island which has suffered the most damage, with an estimated 50 000 hectares lost.

The blaze, fuelled by strong winds, began on 3 August and is still ongoing, with hundreds of firefighters currently tackling the flames.

The heatwave has seen some countries record their highest temperature in decades, with the Italian island of Sicily registering 48.8°C, which may be Europe’s hottest temperature on record. Wildfires have also been raging in other parts of Greece, Italy, Albania and Algeria, prompting activations in the Copernicus Emergency Mapping Service. The mapping service uses data from satellites to aid response to disasters such as wildfires and floods.

Wildfires in Algeria: dozens of civilians and soldiers reported dead