Wildfires in Algeria: dozens of civilians and soldiers reported dead 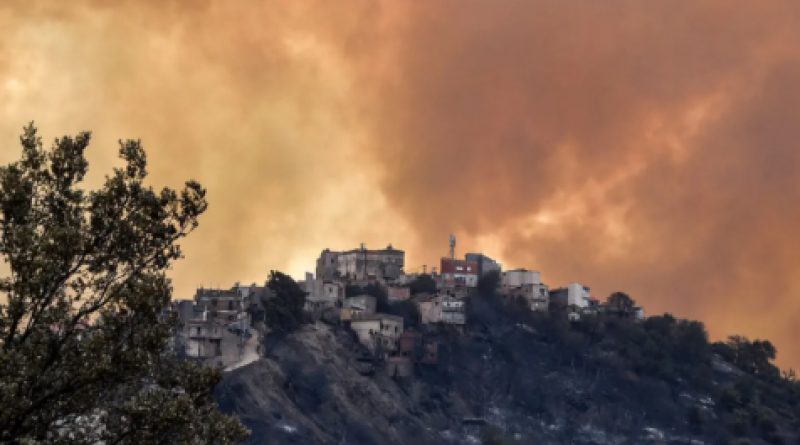 More than 40 people, including 25 soldiers, have died in wildfires that erupted east of the Algerian capital, the country’s prime minister, Ayman Benabderrahmane, said.

Benabderrahmane also told state television that the government had asked for help from the international community and was in talks with partners to hire planes to extinguish fires. So far, 42 deaths have been reported.

Dozens of fires started up on Monday in the Kabyle region and elsewhere, and Algerian authorities sent in the army to help citizens with the blazes and evacuations.

The Kabyle region, 60 miles (100km) east of Algiers, the capital, has many difficult-to-access villages and limited water. Some villagers were fleeing, while others tried to hold back the flames themselves, using buckets, branches and rudimentary tools. The region has no water-dumping planes.

Kamel Beldjoud, the interior minister, went to Kabyle to assess the situation yesterday and accused arsonists of igniting the flames, without providing more details on the allegations.

“Only criminal hands can be behind the simultaneous outbreak of about 50 fires across several localities,” he said.

Other northern areas of Algeria also had active wildfires. The civil protection authority said on Algerian radio that seven people had died, including six in Kabyle plus a man in his 80s who had been trying to save his animals in the Setif region to the east. The authority recorded 41 blazes in 18 wilayas, or regions, as of Monday night, with 21 of those burning around Tizi Ouzou, the Kabyle capital.

The country’s president, Abdelmadjid Tebboune, tweeted his condolences for 25 soldiers killed as they worked to rescue people in the areas of Bejaiea and Tizi Ouzou, the epicentre of the blazes.

“It is with great sadness that I have learned of the martyrdom of 25 soldiers after they were successful in rescuing around 100 citizens from the flames in the mountains of Bejaiea and Tizi Ouzou,” the president said.

A 92-year-old woman living in the Kabyle mountain village of Ait Saada said the scene Monday night looked like “the end of the world”. Fatima Aoudia told the Associated Press: “We were afraid. The entire hill was transformed into a giant blaze.”

Aoudia compared the scene to bombings by French troops during Algeria’s brutal independence war, which ended in 1962. “These burned down forests. It’s a part of me that is gone. It’s a drama for humanity, for nature. It’s a disaster.”

Climate scientists say there is little doubt that climate change from the burning of coal, oil and natural gas is driving extreme events, such as heatwaves, droughts, wildfires, floods and storms. A worsening drought and heat both linked to climate change are driving wildfires in the US and in Siberia. Extreme heat is also fuelling the massive fires in Greece, Cyprus and Turkey.

A civil protection ambulance driver, who asked not to be named, told the AP that the death toll in Kabyle was higher than the six victims cited by the interior minister.