Why should we in Pakistan pay for catastrophic floods we had no part in causing? 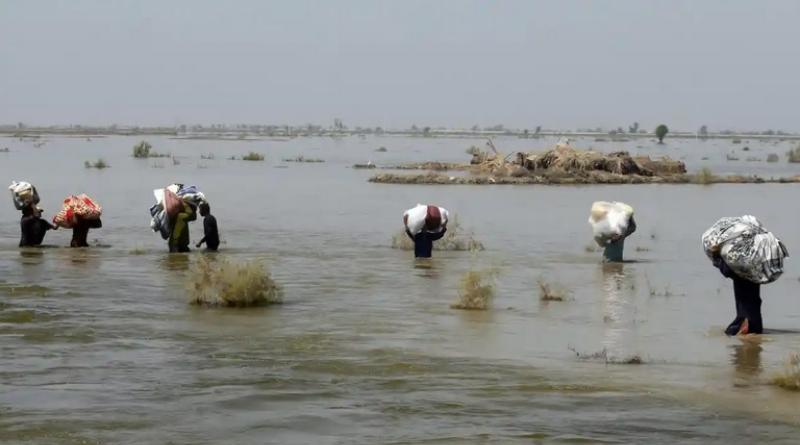 Pakistan continues to pay in loss and damages for the carbon emissions of others. This must change

The climate crisis has accelerated at pace. When temperatures crossed 53C in Pakistan, the summer of 2022 turned our southern towns into the hottest places on the planet, melting our glaciers, burning our forests, scorching our crops. But nothing prepared the country for the biblical flooding that saw a third of Pakistan inundated by an ocean of water, surpassing even the 2010 disaster in magnitude and frequency.

Scientific modelling now attributes the extreme flooding in our country to the climate crisis, and the catastrophe presents a clear warning to all those who have set their climate clocks to another few decades. Previously unthinkable doomsday scenarios began to look like the inevitable: Sindh and Balochistan provinces transformed into horizon-free planes of unbroken water, with no land to pitch tents on, no rooftops left to huddle on. More than 33 million people were rendered destitute; 1,500 people died while the country struggled, in shock, to pick up the pieces.

Aside from the map of human misery that this climate emergency presents, the costs of rebuilding and adapting to such new extreme weather is a cause for anxiety. While the world begins forgetting, Pakistan still must wade through the relief stages of the crisis, with a new generation of climate migrants looking for shelter. Just providing for baseline disaster needs such as shelter and food requires immediate funding, leaving us no space to rebuild livelihoods or preserve crops.

The rehabilitation effort stands to cost billions, while reconstruction estimates are ongoing. Even in a disaster-free year, Pakistan typically loses 9.1% of its GDP to the compounding impacts of climate stress. Early estimates suggest that figure could almost double due to medium-term losses from the superstorm.

Pakistan is not alone in being exposed to both high climate vulnerabilities and low readiness. Much of the global south, buffeted by climate impacts, supply chain interruptions and their high social costs, is looking now for a transfer of resources to go beyond promises – for robust financial mechanisms to actualise the adaptation we desperately need. Our asks are not adversarial, nor are we alone in this. Our goals are realistic, and premised on the reduction of greenhouse gas emissions by big polluters, coupled with resource transfers to the low emitters in need of crucial funding.

The contrast is stark. The G20 alone accounts for 75% of global emissions, many times more than those of the club of climate-vulnerable countries, which includes Pakistan, who emit less than 1% of greenhouse gases but end up paying over the odds in human, social and economic costs for the carbon profligacy of others.

esponsibilities for loss and damage must therefore be part of the climate finance agenda at next month’s Cop27 in Egypt. Expectations also include the burden of emissions to be shared equitably, not equally, let alone disproportionately, which is the case right now. What is needed given today’s pace of change is a tripling of the climate financing targets of $100bn, and not double-counting these as overseas development assistance, but actualised, transparent, agile resource transfers. Currently, much of the best-termed green financing often loses potency thanks to protracted periods of pipelining, during which time resilience needs on the ground change quantitively. Simplified, long-term climate financing instruments are needed to plug severe capacity deficits in the developing countries right now.

Pakistan has set ambitious targets for reducing reliance on fossil fuels, as well as afforestation, but we insist on a just energy transition for cutting greenhouse gases by 50% by 2030. While this means the cost has to be shared, it is not as if there’s no money in the system – big oil and gas firms are making huge profits while they enhance emissions, with no one holding their feet to the fire. Oxfam reports that less than 18 days of gas and oil titans’ profits can cover the entire $49bn of the UN’s global humanitarian appeal for 2022. It is not unreasonable to ask why countries with a negligible carbon footprint, like Pakistan, must pay for global warming catastrophes we had no part in creating.

Time is critical to the entire equation of remodelling global climate projections on this new, accelerated pace of change. On these new trajectories many of us, especially those nearer the equator, are hurtling towards new thresholds. This has to change.