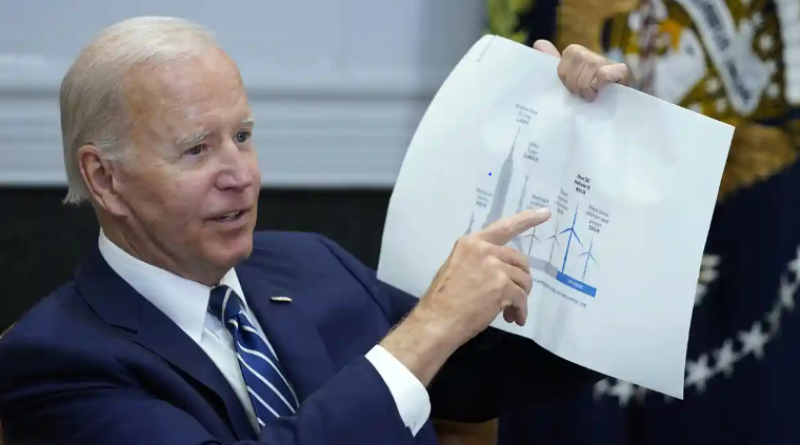 Over the weekend, US Democrats overcame months of political struggle to pass the Inflation Reduction Act in the Senate, marking a major victory for the president, Joe Biden, and for “Bidenomics” before the US midterms.

The bill makes the single largest climate investment in US history, with $369bn for climate and clean energy. It is expected to enable the US to get two-thirds of the way towards its Paris agreement commitments while reducing energy costs. It lowers health costs for millions of Americans. It seeks to tackle inflation by directly reducing costs for individuals and by reducing the deficit through closing tax loopholes and increasing tax on corporates and the wealthy.

The act is far from perfect. It is the diminished descendant of the failed Build Back Better Act, a $2tn package that would have radically extended childcare, free community college and subsidised health insurance, but which ultimately failed to secure the support of the Democrat senator Joe Manchin (a necessity given the evenly divided Senate). Winning political support for the act has required rowing back on climate ambition and more extensive plans to reduce costs for families; allowing further drilling for fossil fuels; and carve-outs to protect private equity profits from the corporation tax element of the act. For this reason, the act will and already has come under intense criticism from activists and climate groups.

However, in the face of fierce political opposition it is a major – even landmark – achievement. It is also a win for the activists and economists who have been persistently pushing and providing ideas for the Biden administration to pursue an alternative approach to the economy and environment: market-shaping green industrial strategy to create good, green jobs; social investment; worker power and incentives for employers to offer decent pay, apprenticeships and profit-sharing with communities; higher taxes on the wealthy to reduce inflation and contribute to the costs, including through a new tax on share buybacks which only serve to boost investors’ incomes. These ideas are no longer stuck on the bench.

Historically the US and UK have taken a shared, leading role in the intellectual development and political implementation of new ideas and policy paradigms. Whether we think about the postwar Keynesian consensus, the neoliberal revolution of Thatcher and Reagan or the third way politics of Clinton and Blair, both countries have tended to move in lockstep. Yet right now, in the context of the Inflation Reduction Act in the US and the Conservative party leadership race in the UK, our policy paths are diverging.

The US has further to go than the UK when it comes to reducing climate emissions and building economic justice. The US has significantly higher levels of emissions (on an absolute and per capita basis) than the UK and the US is also the world’s biggest producer of fossil fuels. Similarly, inequality in the US is starker, and poverty deeper than in the UK. Put simply: the land of opportunity is not delivering for too many American citizens.

But Democrat leaders are pushing through a bold agenda to break through deep political polarisation and reset the shape and direction of what US economic success looks like. The irony when we compare this with the UK is that the conditions are far more favourable here for action commensurate to the scale of the climate and nature crisis, an economic strategy that prioritises everyday people and places over wealth and profits, and for extending collective provision of the things and services we all rely on. We have a head start in terms of the social democracy basics. In sharp contrast to the US, there is more consensus across parties on the need for the government to take action on the climate and nature crises. Action taken now would be far less likely to be wiped away by an opposition win than the fragile progressive gains in the US.

The Conservatives, who have held power for more than a decade, have in recent years flirted with some of those ideas – from May’s mission-oriented industrial strategy to Johnson’s net zero and levelling up pledges – recognising the electoral benefits of doing so. Yet at this moment, the Conservatives are plunging in the opposite direction to their US counterparts, and debating – in the middle of sharply rising inflation and a cost-of-living emergency – policies that are catnip for the Tory membership such as grammar schools and corporation tax cuts, rather than looking around the world or at the evidence on how to address the pressing problems of our time. Truss, widely seen as the frontrunner, has fallen back on outdated tropes of financial support as handouts and has virtually nothing to say on how she would achieve net zero, both for its own sake and as a response to the cost-of-living crisis. Nothing of substance is being suggested to address the creeping, real privatisation of the NHS as those who can go private rather than languish on a waiting list.

It would be wrong to point at the US and claim it has its house in order or that lessons can be read in a simplistic way. But Biden and the activists and researchers around him are ambitiously forging a new kind of economic policymaking that seeks to rapidly decarbonise, reduce pressures on family purses through collective provision, and tax wealth and profits to fund this and quell inflationary pressures. The UK government – whoever it is headed by – should take note of the new economics rather than be left behind.

The Guardian view on the green recovery: Britain is being left behind