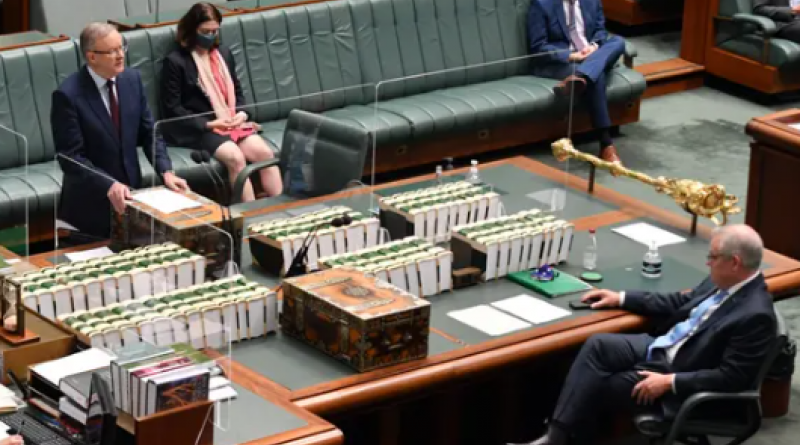 Scott Morrison hoped to focus on the positives of the US alliance on the 70th anniversary of the Anzus treaty but Labor focused on climate ambition differences.

On the 70th anniversary of the Anzus treaty, Scott Morrison would have hoped he’d be in the United States, marking the occasion on the south lawn at the White House, or that Joe Biden would have been in Australia on his first presidential visit, concealing jet lag behind his signature Ray-Bans.

Instead, the milestone was Covid-safe. Biden’s anniversary reflections travelled to Australia on the social media accounts of the state department, and the prime minister found himself behind perspex in the parliament on the first day of spring, reading his carefully turned anniversary reflections into the Hansard, while his wing man, the deputy prime minister, Barnaby Joyce, advised the Speaker he wasn’t that smart and opined that “your heart is where your legs are”.

The minor vexations of Anzus anniversary day emanated not only from Joyce, rumbling with all the eloquence of a semi trailer hindered by a couple of flats, but from across the dispatch box as well.

If Morrison’s pre-Delta aspirations for Anzus day had come to pass, Anthony Albanese would have been a total irrelevance. He would have been invisible, as opposition leaders in pandemic times most often are. But the Labor leader was present on Wednesday morning – by convention, granted equal time at the dispatch box – and Albanese chose a moment of institutional equivalence to tease out one of the weak points in one of Morrison’s narratives about Australia’s relationship with Washington.

The Biden administration has taken various opportunities over the past few months to politely, but publicly, call out Australia’s lack of ambition on climate action.

So the loose thread was there, and Albanese pulled it.

Australia’s relationship with the US rests on the bedrock of shared liberal democratic values. But at its heart, the seven decades long pact is about security. The Labor leader correctly characterised the challenge of averting runaway climate change as one of the most significant security challenges of the 21st century, and he noted the Morrison government’s failure to rise to that reality.

The uncomfortable truth Albanese wanted to get at on Wednesday morning was this: Morrison notes empirically, and with some frequency, that Australia is a lifter, not a leaner, in this alliance. When the US requires a deputy sheriff (to revisit that cringeworthy Howard-era analogy), Australia reports for duty.

But not when it comes to climate action. Here, we’ve been draft dodgers.

Albanese’s point was climate change is one of the most significant priorities of the current US administration, important enough for Biden and the secretary of state, Antony Blinken to name check that issue in their official Anzus anniversary hurrahs to Australia. But on climate, Australia has not yet shown up.

Albanese noted Morrison regularly points to the importance of regional security, when “it is our Pacific partners who face current and existential threats of rising sea levels – and who are urging Australia to step up in word and in deed”.

He said the security risks of a changing climate were becoming more obvious to Australians, and certainly to a national defence force assisting with recovery after once-in-a-century bushfires, or deployed in the region to mop up after “climate driven natural disasters” in Fiji and elsewhere.

Albanese said the security risks of climate change – the geo-strategic and regional impacts, as well as direct impacts on defence systems, infrastructure and operations – were now clearly acknowledged by the US military, which understood climate change was not a future defence problem, “but an immediate challenge”.

“It is time that the Australia-US alliance reflected this reality,” Albanese said. “We should immediately deepen US-Australian cooperation on climate change security issues”.

“We must develop operational plans to address the natural disasters and humanitarian outcomes. Despite this government’s abstinence, the importance of climate change and the impact it will have on defence and security has been embraced by our alliance partner, the United States.”

Possibly to remind onlookers of Morrison’s facility for dealing pragmatically with Biden’s predecessor in the White House, Albanese was also sufficiently forthright to welcome the end of Trumpism. He welcomed the return of “American leadership in the rules-based order under president Biden, and his dedicated effort in repairing alliances”.

He noted Australia had been idling for four turbulent years, waiting for the US to regain its mojo. “Even when the United States stepped back from its longstanding leadership on trade and other forms of multilateralism during the Trump administration, Australia held the line and, importantly, held the door open for the United States.”

Morrison’s remarks on anniversary day also referenced the importance of collaboration on new technologies, critical minerals, strengthening our supply chains, providing vaccines throughout the Pacific, “and meeting the challenges of climate change and the new energy economy”.

But the prime minister does not yet have an answer to Biden’s persistent question – the question about whether Australia will continue to dodge the global climate change draft.

Morrison is working on an answer to that question.

The prime minister is also waiting on a catch-up call from Biden. The guidance is that conversation will happen later this week, which probably means sooner.

Obviously the president has been heavily preoccupied with the calamitous end to the 20-year war in Afghanistan – a conflict he has chosen to end.

Biden has a lot on, and many other issues to engage an Australian prime minister on.

The president will probably not need Australia’s answer to his climate question yet.

But the persistence of US advocacy on this issue suggests he will soon.

Biden’s clean energy plan would cut emissions and save 317,000 lives.