What Is Climate Feminism? 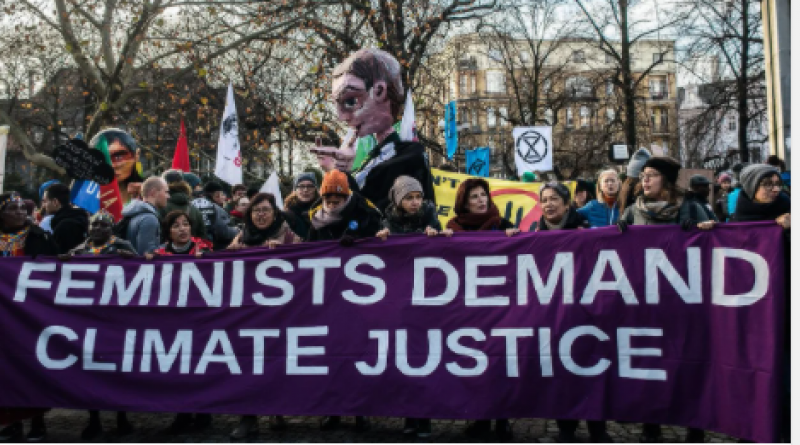 The climate crisis disproportionately impacts women—and women of color in particular. This is why women must lead on its solutions.

Last fall, two powerful hurricanes, Eta and Iota, slammed into Central America within two weeks of each other, causing massive flooding and landslides and affecting millions of people, primarily in Honduras and Nicaragua. Thousands were uprooted from their homes, and women, many with children in tow, suffered the greatest. The events followed a disturbing but familiar trend: The United Nations estimates that 80 percent of people displaced by climate change are women. And it's not just storms that affect them; researchers in India have found that droughts, too, hit women the hardest, rendering them more vulnerable than men to income loss, food insecurity, water scarcity, and related health complications.

"The climate crisis is not gender neutral," says Katharine K. Wilkinson, coeditor of the anthology All We Can Save: Truth, Courage, and Solutions for the Climate Crisis, a book of essays and poems written entirely by women contributors. "It grows out of a patriarchal system that is also entangled with racism and white supremacy and extractive capitalism. And the unequal impacts of climate change are making it harder to achieve a gender-equal world."

In the face of this reality, the world needs to embrace a feminist approach to tackling the climate crisis, she adds. That includes a collective mission to shift who is leading the way on solutions to the crisis, and what the approach will be.

A Multiplier of Injustice

"The intersections of climate and justice and feminism include the disproportionate impact of climate change and the entire climate continuum on women," says Jacqueline Patterson, director of the NAACP Environmental and Climate Justice Program. "We also add the race lens, of course, and the additional risks that are unique to BIPOC women and, most specifically, Black women."

Climate change developed in an unjust world, and now it's exacerbating the vulnerabilities and inequalities experienced by women, particularly those who live in rural areas or the Global South and those who are Black, Indigenous, or other people of color. Patterson reflects on this injustice in the essay "At the Intersections," which appears in the All We Can Save collection. She opens with an anecdote about the first time she saw racism, misogyny, and poverty collide with environmental issues as a Peace Corps volunteer in her father's homeland of Jamaica. Later in her career, as a human rights activist working internationally to combat HIV/AIDS and gender injustice, Patterson learned the story of a woman who left her native Cameroon because the crops in her community had dried up, only to become a victim of rape and then to contract HIV at the country's border. "These stories drew my tears," she writes. "There is a pandemic of devastating impacts at the intersection between violence against women and climate change."

These days in her environmental justice work with the NAACP, Patterson is committed to ensuring that communities in "grindingly desperate circumstances, communities that aren't even thought about," like those without running water or electricity, for example, aren't left out of the climate conversation. And that means not just including them, but deliberately prioritizing them and ensuring their voices are heard on all levels. She asks, "How do we make sure we don't continue with the ills of the past in terms of assuming the rising tide will lift all boats?"

According to Wilkinson, these injustices of the climate crisis also highlight a leadership crisis. What we truly need, she and All We Can Save coeditor Ayana Elizabeth Johnson, a marine biologist, write, is a "feminist climate renaissance." Without this, a just and liveable future becomes impossible. "Research shows that women's leadership and equal participation result in better outcomes for climate policy, reducing emissions, and protecting land," Wilkinson adds.

Indeed, many of today's most influential climate leaders are women. On the international stage, Christiana Figueres, as the head of the United Nations Framework Convention on Climate Change, was the architect of the historic 2015 Paris Climate Agreement, which in its preamble called out the need to empower women in climate decision making. Celebrities like Jane Fonda have brought attention to the climate crisis through civil disobedience and Fire Drill Fridays—inspired, of course, by the activism of Swedish teenager Greta Thunberg and the powerful Fridays for Future movement she began. Female government officials are likewise leading on climate. New Zealand's prime minister, Jacinda Ardern, recently declared a climate change emergency and committed her country to going carbon-neutral by 2025. Meanwhile in the United States, representative Alexandria Ocasio-Cortez was the visionary behind the Green New Deal, a plan for the country to move away from fossil fuels and toward a clean-energy future. And over the past few years, groups like the Sunrise Movement, led by Varshini Prakash, have done critical work inserting the climate crisis into American public discourse.

Wilkinson and Johnson see four main characteristics shared by leaders like these. First and foremost, they prioritize making change over being in charge. "We need to get over ego, competition, and control—all that patriarchal, supremacist, hierarchical stuff that gets in the way, burns a lot of energy, and keeps us from collaborating," Wilkinson says.

Feminist climate leaders also tend to have a deep commitment to justice and equality. Having emotional intelligence is necessary, too. "This is the biggest challenge humanity has ever grappled with, and we're not going to solve it from our prefrontal cortex alone," Wilkinson declares. "We need to come to this as whole human beings. And that means the grief, the uncertainty, the rage, the anxiety, but also the really ferocious love."

Last, feminist climate leaders recognize that building community is a prerequisite for building a better world. Community holds incredible wisdom, while "individualism comes up short on good ideas, and certainly on a sense of purpose and joy," Wilkinson says. Nurturing that sense of community in the broad climate movement is often a first step, especially when uniting allies from disparate groups. As Gulf Coast Center for Law & Policy founder Colette Pichon Battle advises, before diverse groups of women can stand on the front lines together, they must heal the relationships and reconcile the unjust social dynamics that exist between their various communities.

The good news is that women are uniquely prepared to take on this social and environmental healing work. "Women have had to develop a coping and a nurturing set of skills in order to see the survival of our families," Patterson says, adding that caring for a family under the most dire of circumstances has been bred into the DNA of Black women, who carry the trauma of slavery. "Women have just had to," she says.

For her part, Wilkinson says that she sees evidence of the growth and power of the feminist climate ecosystem every time she turns around. Leaders in the youth climate justice movement embody these characteristics, and increasing numbers of women are getting a seat at the national table (including former NRDC president Gina McCarthy, another All We Can Save contributor, who is now steering domestic climate policy from the White House). "There are lots of signs that this galloping herd is getting bigger and faster and stronger. And that gives me a lot of courage," Wilkinson says.

For their nonprofit All We Can Save Project, Wilkinson and Johnson have developed a 2030 vision for women leading on climate to hold the power to create transformational change and experience deep joy in their work. Their community-minded approach to solving the climate crisis prioritizes the collective lifting of one another's spirits and helps build momentum—both of which serve as an antidote to the gloom that can sometimes consume the lone climate warrior. "We're really into this idea of power and joy," Wilkinson explains. "Power is what you need to make change happen. And joy is frankly what you need to keep showing up every day."

With climate feminists at the helm, more resources and investments could be procured for the transformational climate work that cisgender and trans women and nonbinary leaders are already doing—developing solutions, researching and writing, doing community organizing—often at night or on the weekends. These leaders and their teams can also serve as examples and mentors for emerging climate feminists of all genders and ages.

And of course, men can be climate feminists too. "There's a really important role for men, and I think it starts with listening," Wilkinson says. "And when we consider core approaches to climate leadership, things like compassion, connection, creativity, collaboration, care, a commitment to justice, all of that is open to people of any gender." She notes that men in positions of power—whether they control funding or platforms or lead an institution—can be more intentional in helping to change the face of climate leadership. They can extend invitations to more women and to others from diverse backgrounds to bring forth ideas and lead projects, or they can step back and let others make decisions and set the vision.

Such collaborative work is increasingly urgent. "Even now, at the 11th hour for climate action, so many people in power are denying, blocking, and delaying, or putting forward hollow promises about what they're going to do," says Wilkinson. "It's absolutely devastating. But I do think the tide is turning. I think we will win."

She adds that Ireland's former and first female president Mary Robinson sums up the situation perfectly with the tagline to her Mothers of Invention podcast: "Climate change is a man-made problem—with a feminist solution!"

Women must not be sidelined in climate crisis talks, says scientist Katharine Hayhoe.