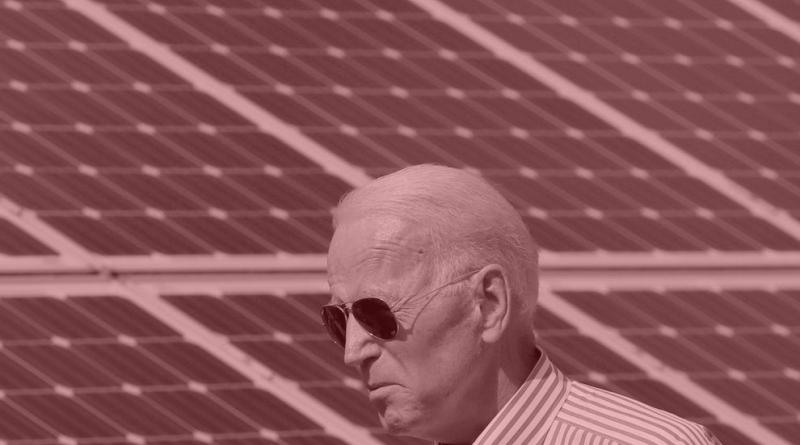 Joe Biden winning the election could have a significant impact on the climate crisis and give the world a fighting chance of keeping global temperatures in check, scientists say.

The Democratic candidate's climate plan is the boldest of any presidential candidate in history, proposing a $2tn investment in clean energy to create carbon-free electricity by 2035.

Mr Biden has vowed to immediately rejoin the 2015 Paris Climate Agreement, the international pact to limit global heating to well below 2C.

A report published by the Climate Solutions Lab at Brown University in October proposed that beyond his sweeping agenda, Mr Biden could go even further and create an international “Climate Club”.

So what exactly has Mr Biden said about the climate crisis and how extensive are his plans to tackle further global heating?

1.What has Joe Biden said about climate change?

The Democratic presidential candidate has repeatedly called climate change an “existential threat” and linked its impacts to taking a toll on the most vulnerable Americans.

While speaking about the unprecedented California wildfires in September, Mr Biden spoke about the “undeniable, accelerating, and punishing reality of climate change and its impact on our planet and our people — on lives and livelihoods…" 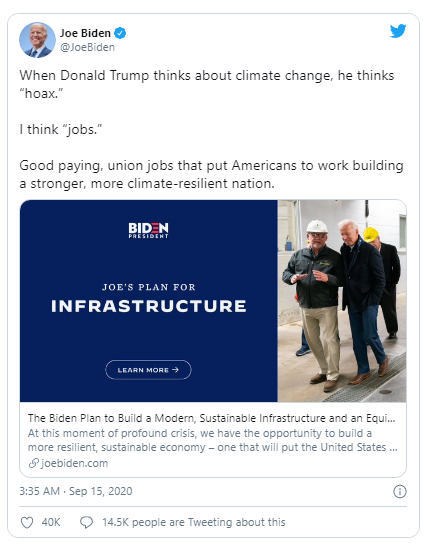 He continued: “The unrelenting impact of climate change affects every single one of us. But too often the brunt falls disproportionately on communities of colour, exacerbating the need for environmental justice."

He also also framed climate change as an opportunity in the style of an FDR-like New Deal, providing infrastructure jobs across the US.

2.What is his plan to tackle climate change?

It involves $2 trillion investment in clean energy over four years in the US and called for 100 per cent clean electricity by 2035.

Senior campaign officials, who spoke anonymously to the AP, said it would  be paid for through a mix of tax increases on corporations and the wealthy, and deficit spending aimed at stimulating the economy.

It’s a plan that evolved this summer to take into account the view of progressives, like Bernie Sanders and Alexandria Ocasio-Cortez, that Mr Biden needed to commit to more sweeping and urgent action on the crisis.

His campaign platform describes the Green New Deal as a “crucial framework” but doesn’t go as far as the ambitious proposal that calls for achieving net-zero greenhouse gas emissions across the economy by 2030.

The former VP has repeatedly pledged not to abolish hydraulic fracturing, or fracking, the oil and gas extraction method.

However he said that he would ban new gas and oil permits, including for fracking, on federal lands. Fracking operations are largely on private lands. (The issue risks alienating centrist voters in key swing states like industry-heavy Pennsylvania.)

The Biden climate plan places a heavy emphasis on updating America’s infrastructure and includes investments in improving energy efficiency in buildings and housing as well as promoting production of electric vehicles and conservation efforts in the agriculture industry.

It also includes a portion focused on environmental justice, including a requirement that 40% of the money he wants to spend on clean energy deployment, reduction of legacy pollution and other investments go to historically disadvantaged communities.

The Democrat has also stated that he would recommit the US to the Paris Climate Accord and lead an international effort to have every major country increase their emission-reduction targets.

3.What is Mr Biden's record on climate change?

Experts point to Mr Biden’s decades of foreign policy experience as an attribute for driving the epic international cooperation that will be needed to fully tackle the climate crisis.

In the mid-Eighties, when NASA scientist James Hansen testified before Congress on the greenhouse effect, then Senator Biden introduced the Global Climate Protection Act which eventually led to talks between President Ronald Reagan and Soviet leader Mikhail Gorbachev, committing to "broad international and bilateral cooperation in the increasingly important area of global climate and environmental change."

In 1992, Mr Biden criticised President George HW Bush for not pushing countries to provide targets or timetables to reduce emissions, Inside Climate News reported, as he cast his vote to ratify the UN Framework Convention Treaty on Climate Change.

But as a senator, he also supported controversial fracking and “so-called clean coal”, the Council on Foreign Relations noted.

Mr Biden points to the achievements of the Obama administration which tightened fuel-efficiency standards (although they were later watered down by President Trump) along with the $90bn for clean energy in the 2009 stimulus law which as vice president he played an instrumental role in negotiating. The Obama years were also when the 2015 Paris Climate Agreement was struck.