‘We need something real’: the Russian climate activist taking on Putin’s war 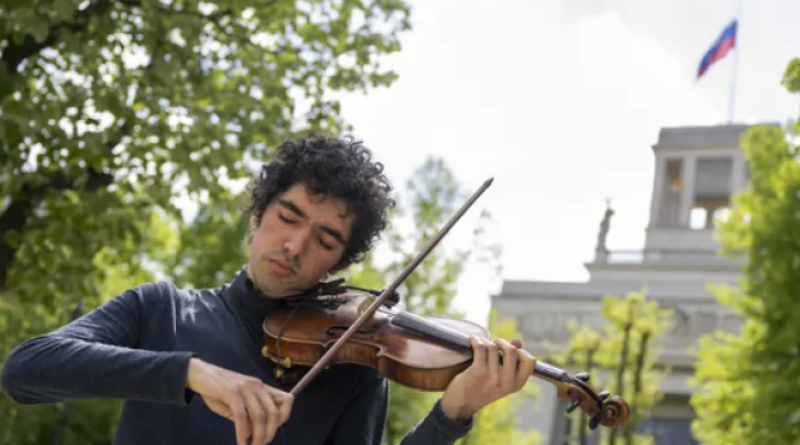 Arshak Makichyan made a name for himself as Russia’s ‘lone climate activist’, protesting for change in a country where oil and gas exports have propped up the country’s economy for decades.

Every Friday, for nearly two years, Makichyan protested alone in Moscow’s Pushkin Square, hoping to draw Russian attention to the danger posed by climate change. Born in Armenia, but given Russian citizenship when he was 10, Makichyan graduated from a prestigious music conservatory and turned to activism after reading about climate change and Greta Thunberg’s weekly strikes. “I was representing Russia as a violinist on competitions, and I was organising Friday for Futures, so I had a feeling that I am a future of Russia,” he said.

Now the Russian government wants to punish him by taking away his passport.

In a court hearing this week, Russia will seek to revoke Makichyan’s citizenship, in a move that he and his lawyers call unprecedented, and a threat to millions of foreign-born Russians willing to speak out against the war.

“Even though I was born in Armenia, I am part of Russian culture, I love Russia, I was fighting for Russia for years, I was risking my freedom for years,” said the activist in an interview over the phone on his 28th birthday last week. “And now I don’t know what to do.”

In his first interview about the case, Makichyan, who left Russia with his wife, Polina, in late March, and is currently living in Germany, told the Guardian he felt that the Russian claim was revenge for his anti-war and climate activism. Most recently, he has lobbied European politicians for a fossil fuel ban that could deprive Vladimir Putin’s regime of its key source of revenues.

Russia has regularly expelled foreign activists from the country. But stripping a Russian citizen of his nationality would be a rare move as the country sinks deeper into isolation and totalitarianism since launching its war in Ukraine. If Russia succeeds, Makichyan told the Guardian he would be left stateless.

“I was inspired by [Alexei] Navalny because he returned to Russia although it was very dangerous,” said Makichyan. “I was planning to go back to Russia with my wife to continue to fight against this war. But now most likely we cannot go back to Russia any more.”

The impact of climate change is being felt more and more strongly in Russia, which has been hit by growing forest fires in Siberia and melting permafrost and growing desertification in Russia’s south. But it remains a niche concern for most of the country.

Before the war, Russia’s tiny handful of eco-activists used to believe they could lobby the government for real policy change, even as the Kremlin failed to meet its obligations under the Paris agreement on greenhouse gas emissions and continued to profit from exports of fossil fuels.

But the war has changed everything. According to Makichyan it has shown that it is impossible to negotiate with Putin. He adds that he could “not pretend like it’s normal and continue talking about 2050 when millions of people are suffering now”.

“I was connecting the dots between the human rights crisis and climate crisis,” he said. “Of course this war was a red line for a lot of people. That’s why I am calling Putin a war criminal and a killer. Because before the war I was thinking that maybe it’s better not to be that harsh on him. But now I think it’s a moral obligation to tell things as they are.”

The climate activist was arrested in Moscow in late February for speaking out against the war, and his wife had been arrested several times for staging protests. “I didn’t want to leave the country but my wife was saying that she wants to breathe free air and it was actually unbearable for us,” he said. “Because we were expecting searches almost every day. Likely we would have been arrested if we had stayed in Russia one or two more days.”

At one point, he and his wife even swapped clothing for a Pussy Riot-style escape from a police stakeout at her parents’ flat. Polina dressed up as Makichyan, a floppy-haired, rail-thin activist who would still fit in on most college campuses. She walked straight past police before a friend drove her out of the neighbourhood.

They decided to marry this winter so that if they were arrested, they would have the right to see each other in prison. Their wedding day, 24 February, turned out to be the same day that Putin launched his invasion of Ukraine. Makichyan wore a white shirt bearing the words “Fuck the war” in blood-red lettering.

For years, he said, Russia has been using the topic of climate change to promote its own interests, like its nuclear energy programme, while “marginalising and ignoring” activists in Russia like Makichyan who were calling for significant cuts in emissions.

Now outside Russia, he said they were shocked by the indifference that many Europeans were showing toward the war.

“I think the west can do much better than they are doing now,” he said, saying that he had been in Germany for two months and politicians had declined to meet him.

“They don’t understand how it is crucial now to act,” he said. “We need something real. Of course if we have embargo on Russian fossil fuels it will influence life in Europe, there will be some economical consequences.

“But this war is something bigger, it’s not about economy, it’s about survival. If we won’t change Putin’s regime then I don’t know how we can have new climate negotiations.”