War in Ukraine poses environmental risk now and in the future, advocates say 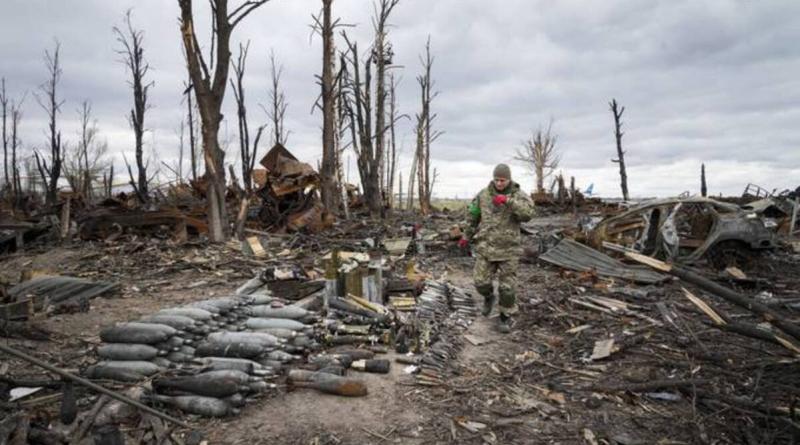 As Russian forces bombard communities across Ukraine, the nation’s once-vibrant ecosystems are becoming scorched and scarred, rewinding decades of conservation work, according to Ukrainian climate advocates.

Svitlana Romanko, a Ukrainian climate justice activist and former environmental law professor, told The Climate 202 that the consequences of the damage on the environment and biodiversity after the war will be felt for years to come.

“Ukraine has been severely damaged and destroyed and there are cities that don’t even exist anymore,” Romanko said. “Every night the missiles and bombs are still flying through the territory of Ukraine, so these are natural disasters as well.”

Nearly one-third of the country’s protected waters and lands have been occupied by Russian forces, leaving both the Ukrainian government and environmentalists in the dark about climate risks or how the land might have been harmed.

“We’re reluctant to collect [climate impact data] now, and it’s kind of hard to do it because of the war. All information is closed,” said Evgenia Zasyadko, climate policy coordinator for Ecoaction, a Ukrainian environmental advocacy organization. “We don’t know what’s going on there.”

Of particular concern, Zasyadko said, is the eastern part of Ukraine, which is home to industrial infrastructure including oil depots, coal mines and nuclear power plants. Without human regulation, each site could potentially spill fuel and leak toxic, planet-warming pollutants into villages, the water supply and the atmosphere.

According to Ukraine’s Ministry of Energy and Environment Protection, more than 1,500 Russian missiles have been launched at Ukraine thus far, with more than 5,000 units of various Russian military equipment being destroyed — all also spewing unmonitored amounts of chemicals and greenhouse gasses into the air and soil.

While Russia’s invasion of Ukraine has been an unlikely turning point for climate activism, advocates on the ground say that eliminating fossil fuel use could reduce devastating climate outcomes, while also disrupting Russia's oil-dominant economy.

Romanko argues that without its fossil fuel industry, Russia wouldn’t be able to fund the war in Ukraine, adding that much of Russia’s wealth and power comes from its oil and gas exports.

“This is about energy security, climate crisis and war in Ukraine having the same roots and hence the same solution,” she said. “It’s about justice. I truly want to end the war in my country. We have had enough of fossil-fueled wars and climate-hostile wars.”

Oleg Savitsky, an energy and policy expert at the Ukrainian Climate Network, agreed with Romanko, adding that Russia should be removed from all international groups as a consequence for disrupting peace and committing acts of terrorism both on civilians and on the environment as a method of war.

This act would directly affect Russia’s fossil fuel shipments, according to Savitsky, which he said allows the Kremlin to build its “war machine.”

The Ukrainian Climate Network plans to call on the United Nations at the Stockholm +50 meeting in June about their Fossil Fuel Non-Proliferation Treaty to produce an international response to end expansion of new fossil fuel production, phase out existing production and enable a globally just transition to low emissions energy systems.

The meeting, which marks the 50th anniversary of the first-ever international summit on the environment, is a unique opportunity to initiate a globally coordinated effort to combine warming goals with climate justice, requiring wealthy countries to provide financing and technology to developing nations like Ukraine, Savitsky said.

“I think we are now at the breaking point for a global trajectory of energy and climate policy and everything depends basically on the response to the war,” he said.

“Climate policy is set to fail if we don’t address the core issue, which is fossil fuel extraction.”

What's next for Ukraine

In a combined effort with the Ministry, Zasyadko said she has counted at least 139 instances of what she referred to as “environmental war crimes” committed by Russia during the invasion, each of which she hopes the country will be charged with and mandated to pay for by the International Criminal Court.

“The number very likely could be much more,” Zasyadko said. “The real evaluation could only happen when Russia leaves the Ukrainian territory and we can go in and evaluate what kind of harm actually this brought to us.”

According to the U.N. Office on Genocide Prevention and the Responsibility to Protect and the Rome Statute of the International Criminal Court, a war crime includes launching an attack while knowing that it would cause loss of civilian life or “widespread, long-term and severe damage to the natural environment which would be clearly excessive in relation to the concrete and direct overall military advantage anticipated.”

Romanko noted that it is extremely difficult to prove an environmental crime before the court because you need to have proof of causal connection along with documented damage for determining reimbursement. But, she added, it’s doable.

She said the monitoring Zasyadko and the Ministry are doing is essential to determining what the financial responsibility or punishment should be for environmental crimes down the line.

In terms of reconstruction in Ukraine after the war, Savitsky said a “green Marshall Plan,” similar to what was enacted after World War II, should be internationally adopted to accelerate the clean energy transition in Ukraine while also reckoning with layers of societal upheaval caused by war.

During recovery after the war, Savitsky said, it would be easy to rely again on fossil fuels to restore buildings, agriculture and industry, but that would ignore climate goals.

“We’ll need a complete overhaul of Ukraine’s economy, which is very energy intensive and oriented on production of raw materials,” Savitsky said. “Ukraine needs to become a new industrial and renewable energy hub for Europe but based on clean technologies.”

“This requires the scale of investment only compared to reconstruction of Europe after World War II, so we really need a green Marshall Plan for Ukraine,” he said.

By Vanessa Montalbano with research by Maxine Joselow

War in Ukraine is compounding a hunger crisis in East Africa, charities warn