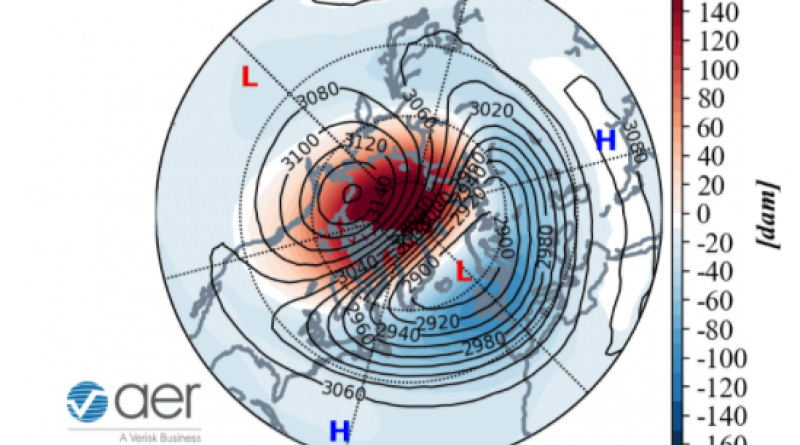 Snowier, colder weather may be heading to the Eastern U.S.

High above the North Pole, the polar vortex, a fast-spinning whirl of frigid air, is doing a weird shimmy that may soon bring cold and snowy weather to the Eastern U.S., Northern Europe and East Asia for weeks on end, meteorologists say.

While it's not unusual for the polar vortex to act up, this particular reconfiguration — wandering around and possibly splitting in two — may be tied to climate change in the rapidly warming Arctic, said Judah Cohen, director of seasonal forecasting at Atmospheric and Environmental Research in Massachusetts, part of Verisk Analytics, a risk-assessment company.

"Expect a more wintery back-half of winter here in the Eastern U.S. than what we had in the first half," Cohen told Live Science.

The Arctic is heating up faster than any other region in the world. As a result, sea-ice cover there is shrinking — in September 2020 and December 2020, the Arctic sea-ice cover shrunk to its second-lowest and third-lowest minimum on record for those months, respectively, according to the National Snow and Ice Data Center.

The warmer-than-usual temperatures in the Arctic are likely throwing the polar vortex out of whack, Cohen said. The polar vortex is a vast area of low pressure that sits high above the Arctic in the stratosphere — the layer above the troposphere, the lowest layer of Earth's atmosphere where most weather conditions happen. This low-pressure system is usually filled with cold, swirling air. During the winter, a jet stream of air that keeps the polar vortex in place sometimes weakens, allowing the vortex's chilly air to extend southward.

Here's an animated video Cohen made illustrating the process.

Cohen and colleagues have suggested that less Arctic sea-ice cover means there's more moisture from the sea migrating inland over normally dry Siberia. This moisture then turns into snow, which reflects heat back into space and is making Siberia colder than normal; that in turn disrupts a thermal band in the troposphere extending over Eurasia. This discombobulated band can then destabilize the polar vortex, causing colder winters east of the Rockies in the U.S. and in Northern Europe and East Asia, Cohen and his colleagues wrote in a 2019 review in the journal Nature Climate Change.

"Think of the polar vortex like a quiet, fast spinning top that spins in place," Cohen said. "Then, you have this energy [from the troposphere] that starts banging" on the spinning polar vortex, making it wobble and wander.

He added that this season, "snowfall across Siberia has been above normal so far. Therefore, I do believe it has contributed to the weak polar vortex." 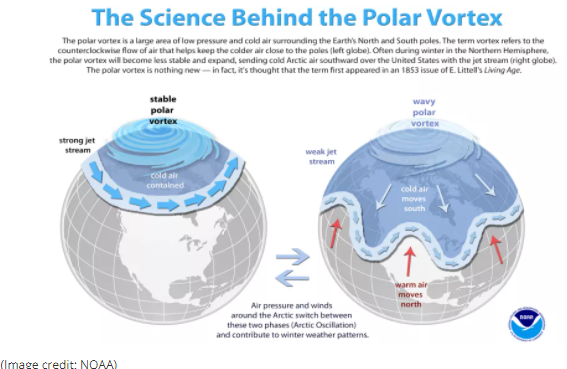 Not everyone agrees with this increased-Siberian-snow-and-wobbly-polar-vortex connection, but it is clear that a weakened polar vortex leads to colder winters in certain parts of the Northern Hemisphere. It's also accepted that so-called sudden stratospheric warming (SSW) events can weaken the polar vortex and make it teeter around. SSWs happen when large-scale atmospheric waves associated with weather systems reach into the stratosphere and disrupt the polar vortex, causing it to slow down and heat up as much as 90 degrees Fahrenheit (50 degrees Celsius) within a few days.

Cohen noted that SSWs can be triggered by weather conditions associated with the Arctic's disappearing sea ice. SSWs happen an average of six times every 10 years, and right now we're experiencing a big SSW, The Washington Post reported.

It's possible the SSW was caused by a high-pressure, low-pressure system, said Amy Butler, a research scientist at the National Oceanic and Atmospheric Administration Chemical Sciences Laboratory in Boulder, Colorado.

It's also possible that the extreme bomb cyclone (a rapidly-forming winter storm with hurricane-strength winds) in the North Pacific a few days ago, contributed to the SSW, "but that will have to be investigated further," she said.

On Jan. 5, the polar vortex's counter-clockwise winds reversed direction (a clue that a sudden atmospheric warming event had happened) and the vortex wandered from its usual location centered over the North Pole, toward Europe and the North Atlantic, Butler said. During that time, it began to (but didn't completely) split, Cohen said.

The polar vortex might split further in about 10 days, "but it's unclear if this will happen," Butler said. "Forecast models struggle with predicting a splitting of the vortex more than a week in advance."

Disruptions to the polar vortex are key for forecasts, as about two weeks after they happen, the troposphere gets a wallop of weird weather, which can last for weeks. Because of this week's polar vortex disruption, "there's indications we'll see some colder weather within two weeks … in the Eastern U.S., Northern Europe and East Asia," Cohen said.

For now, it's up in the air whether that means snowstorms or a rash of cold air, he said.

Meanwhile, "warmer-than-normal conditions can also occur over the Canadian Arctic and subtropical Asia and Africa," Butler said. "These effects could potentially persist for 4-6 weeks after the sudden stratospheric warming."