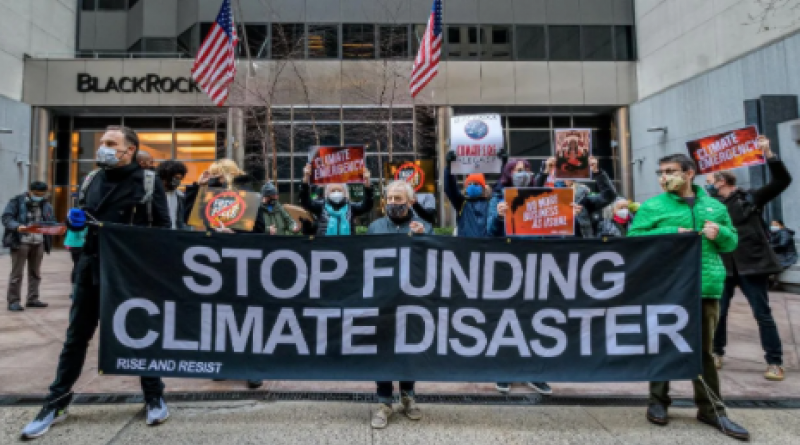 "The boardrooms of the world's largest banks are polluted to the core... How are we ever meant to stop the climate crisis if the world's most powerful decision-makers are in bed with the companies behind the wheel!?"

That's how Bank on Our Future — a UK-based network pressuring financial players to align their business practices with tackling the climate crisis — responded Wednesday to a new DeSmog analysis revealing that a majority of directors at major banks worldwide are connected to polluting companies and organizations.

"This is a ginormous and superb piece of work by the talented sleuths" at DeSmog, said Beau O'Sullivan, a campaigner at the Sunrise Project in Australia. He added that the report "contains findings that readers may find offensive and deeply disturbing." 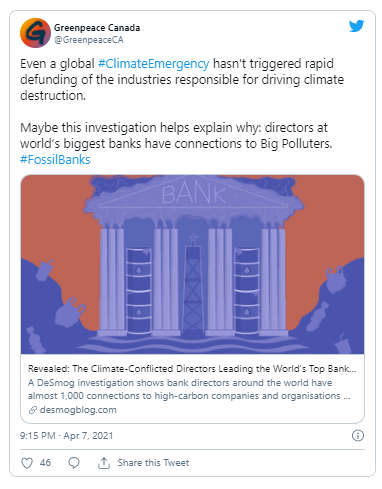 DeSmog examined the boards of 39 banks, including seven based in the United States, and found that 65% of directors have a total of 940 past or current ties to "climate-conflicted" industries. Across all banks studied, 16% of board members had ties to companies involved in extracting coal, gas, and oil.

In addition to fossil fuels, "there were also significant ties to banks and investment vehicles supporting polluting industries, as well as to thinktanks and lobbying groups with a history of campaigning against climate action," reported DeSmog's Phoebe Cooke, Rachel Sherrington, and Mat Hope. 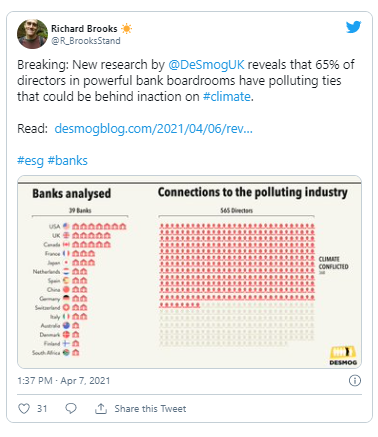 "The fossil fuel industry has a well-established track record of ingratiating itself with society's opinion leaders and decision-makers," Geoffrey Supran, research associate in Harvard University's Department of the History of Science, told DeSmog about "the revolving doors between the corporate leaderships of incumbent industries."

"Having its fingers in all the pies allows the fossil fuel industry to quietly put its thumb on the scales of institutional decision-making, helping delay action, and protect the status quo," added Supran, who called the results of the analysis "predictable, yet shocking."

Alec Connon, coalition coordinator at Stop the Money Pipeline, responded similarly to the revelations in an email to Common Dreams.

"It should surprise no one that Wall Street boards are brimming with executives with close ties to climate-damaging companies," he said. "Since the Paris agreement was signed in 2015, Chase, Wells Fargo, and their Wall Street ilk have loaned more than $1 trillion to the fossil fuel industry. In the climate crisis, Wall Street is a primary villain."

"Perhaps if they had fewer fossil fuel executives on their boards," Connon added, "that would begin to change." 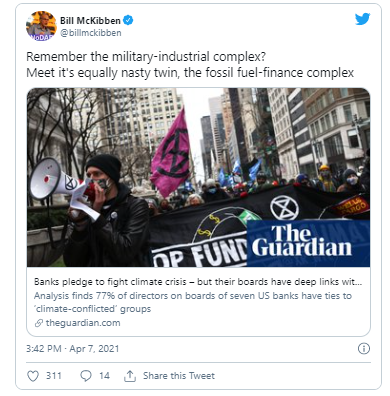 A coalition of green groups including the Rainforest Action Network (RAN) released a report last month detailing how the world's 60 biggest banks have poured over $3.8 trillion into the fossil fuel industry in the wake of the landmark climate agreement, which aims to keep global temperature rise by 2100 to "well below" 2°C, with a more ambitious target of 1.5°C.

The groups' Banking on Climate report generated fresh criticism of big banks' recent pledges to work toward net-zero greenhouse gas emissions by 2050. In light of DeSmog's reporting, Connon also addressed such commitments, saying that "2050 promises without 2021 action are essentially meaningless."

"We need action today, not vague promises of action in the next three decades," he continued. "Perhaps the fact that Wall Street boards are so full of fossil fuel executives is one reason why they're continuing to prioritize empty promises over immediate, meaningful policy change."

Since January 2020, the Stop the Money Pipeline coalition has pressured banks, insurers, and asset managers to cut ties with companies financing climate destruction. While its initial top targets were JPMorgan Chase, BlackRock, and Liberty Mutual, the coalition has expanded its efforts — including with a recently launched campaign directed at funders of Enbrige's Line 3 tar sands pipeline.

That controversial project — intensely opposed by Indigenous water protectors and climate campaigners — was the focus of a report by Emily Holden of Floodlight and Emily Atkin of HEATED, published Wednesday in The Guardian.

Citing DeSmog's finding that 77% of board members at seven major U.S. banks have ties to climate-conflicted companies or groups, the pair provided "an on-the-ground look at where all this dirty money is going," as Supran put it.

According to Holden and Atkin:

From the U.S., Bank of America, Citigroup, JPMorgan Chase, and Wells Fargo have made the project possible with billions of dollars in loans, although it's impossible to tally precisely how much they have financed for the pipeline specifically. Another five large Canadian banks are also financing Enbridge, according to RAN.
Out of these nine North American banks backing Enbridge, six have recently published net-zero climate goals, pledging to align their investments with the international Paris climate agreement.
"The banks are gorging on doughnuts and then eating an apple afterwards," said Richard Brooks, the Toronto-based climate finance director for Stand.earth. "We certainly can't rely on banks or the private sector to lead us into climate safety and lead us toward emissions reductions. We need policy, we need regulation. We need government to act."

Last week, 145 groups sent a letter to John Kerry, President Joe Biden's climate envoy, encouraging the former secretary of state to use his current position to help end "the flow of private finance from Wall Street to the industries driving climate change around the world — fossil fuels and forest-risk commodities."

Campaigners are also calling for changes at the institutions.

"We need people who are willing to lead on climate on the boards of the country's largest financial institutions," said Connon. "That's why Stop the Money Pipeline is joining the growing calls on major investors, such as BlackRock and Vanguard, demanding that they vote against any corporate directors that have proven themselves unable or unwilling to take real action on climate. That starts this shareholder season."