Very Overwhelming and Scary’: How it feels to suddenly wake up to the Climate Emergency 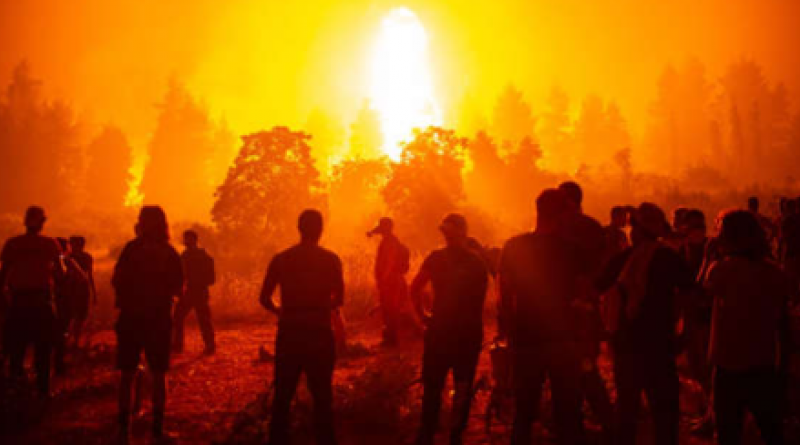 For Brenda Gabriel, 39, from London, the tipping point in her climate consciousness was the devastating bushfires that ravaged large swathes of Australia from September 2019 to March 2020. By the time the last fire was extinguished, an estimated 18.6 million hectares (186,000 square kilometres) of land had been razed, with more than 5,900 buildings and homes destroyed, three billion animals harmed, and 34 people dead.

“I remember being so frustrated watching those fires on the television, particularly because the indigenous people had warned the government that it would happen,” Gabriel told The Independent.

Gabriel had already individually been prompted to move towards a crisis mindset by a 2018 BBC documentary, which examined the history of throwaway culture and the environmentally damaging results that vast amounts of rubbish eroding into the ground and sea produces. “There were also all these photos of plastic rubbish being sent to countries across the ocean, and it made me so angry and disheartened.

“Here I am, washing out plastic bottles and containers and trusting that they will be recycled and turned into something wonderful, but instead we’re making it someone else’s problem. It feels really unfair,” she added. Like many others, Gabriel long played her part but was now starting to see how that fit within the jigsaw of the once-in-a-lifetime disaster facing the entire planet.

If there is a meme that could encompass the feeling of living in the midst of the current climate crisis, it would be the cartoon dog sat in a burning room, its blank smile betrayed by its wide-eyed terror, with the caption: “This is fine”.

Watching the world (literally) burn with wildfires raging to the east in Greece, Italy, and Turkey, and west in California and Canada. Soaring temperatures and dry conditions in many regions have led to some of the worst fires in nearly a decade. While Britain spends August coping with its own extreme weather: torrential rain led to flash flooding in London in recent weeks, with scientists warning that flooding will become more common as the climate crisis deepens.

To make matters more bleak, the world’s leading authority on climate science issued a stark warning on Monday: we are running out of time to avert the impending climate breakdown, and there is “unequivocal” evidence that humans are to blame for the Earth’s rising temperatures.

The comprehensive report published by the UN’s Intergovernmental Panel on Climate Change (IPCC) found that “it is more likely than not” that the world will reach 1.5C above pre-industrial levels at some point in the next 20 years. The tipping point temperature we were long warned we should not reach for fear of creating irreversible destruction.

Professor Ed Hawkins, researcher at the University of Reading and one of the 234 scientists behind the report, told a briefing: “We’re already experiencing climate change, including more frequent and more extreme weather events. The consequences will continue to get worse for every bit of warning and – for many of these consequences – there’s no turning back.”

The publication of the report could not have been more timely - providing the concrete framework on which to hang our ever-growing individual and localised experiences of extreme weather events that have left us all asking: the weather really isn’t normally this bad, is it? As tube stations begin being submerged under water from London to Zhengzhou, and people’s homes are swept away in Germany and Belgium, it feels harder than ever to ignore it.

Billie Pike, 25, who lives in Southampton, told The Independent she had always been aware of the importance of sustainability, but became much more cognisant of the climate crisis during the first coronavirus lockdown in March last year. The final nail in the coffin was the record-breaking August heatwave that hit the southeast of England last year. Temperatures reached 34C or higher for more than six consecutive days, and five tropical nights – where the night-time temperature does not drop below 20C – were recorded that month.

“It was a major eye opener for me. Since then, it’s been forest fires everywhere, flooding everywhere – it’s just very overwhelming and scary,” said Pike. “When I started working from home last March, I was in the same boat as everyone else. You’re stuck at home, you had so much time to read bad news and think about stuff. It was starting to get quite depressing and I thought, I’m just one small person, I can’t do much. I can’t control this.”

Both Gabriel and Pike said they have experienced some form of “climate anxiety” over the past year. Climate-related distress, also known as “eco anxiety”, has risen over the past year particularly among young people in the UK.

In an effort to claw back some semblance of control over their individual impact on the planet, both have joined a growing number of people who are changing their behaviours in an effort to lead a more sustainable lifestyle. A 2021 consumer sustainability report by Deloitte found that in the last 12 months, more people are adopting different measures to shop and live more sustainably, such as cutting down on single-use plastics (61 per cent), buying seasonal produce (49 per cent) and reducing the number of new products they buy (39 per cent).

Gabriel said her and her family’s main focus has been centred around producing less plastic waste. “I try to buy things in bulk so that we create less packaging waste, switch to reusable water bottles and food containers. There are an increasing number of shops where you can buy things in paper bags, like rice, seeds, pulses and pasta, rather than having to buy everything pre-packaged,” she said.

She admitted that at times, it is difficult to make the swap from plastic, particularly when it comes to food. “There are some things you want that you have no choice but to get them fully-packaged, and we’re always fighting this battle between convenience and doing what’s right for the planet,” she said.

“I try to cook things from scratch as much as possible so that I’m not buying so much ready-made food in packages. But with kids, that’s not always easy, and I find it quite difficult to stay away from pre-packaged snacks for them.

“I think we all have to be prepared to be slightly inconvenienced to look after the planet, because at some point, something is going to have to give,” she added.

Pike, on the other hand, joined an app called Olio that aims to reduce food waste in March this year and began collecting excess food from her local Tesco to be distributed into her community rather than sent to landfill.

“At one point, I collected three crates of bananas. They were sitting in my flat and I just thought of all the effort it took to grow these bananas, all the water and resources that were used, and then fly them across the world only for them to potentially end up in the bin.

"That really hit me hard and it just didn’t sit well with me. Since starting these collections and redistributions, I actually feel like I’m doing something to help, even if it’s just a local effort.”

Changing the way we consume and making demands of governments and corporations to take action on climate change is one of the most important things we can do moving forward, Gabriel added. “We’re all supporting consumerism in some way, we’re buying and creating more stuff all the time and it’s unsustainable,” she said.

“I think we vote with our money, so if we stop buying certain things, companies will have no choice but to change their practices. When we started demanding more vegan alternatives, people started creating them, so consumers need to be pushier if we want to see massive companies changing their ways. Otherwise, it’ll be too late.”

Why can't we leave them alone? The troubling truth about selfies with sloths.

Climate change: why government failure to act isn’t the problem

This is the most sobering report card yet on climate change and Earth’s future. Here’s what you need to know