Variant of photovoltaic power could generate 24 hours a day. 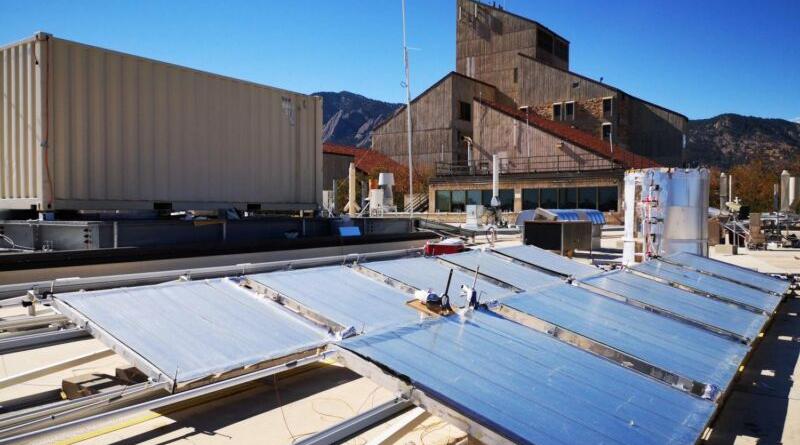 It's much less efficient than photovoltaics, but it works around the clock.

Moving from the present world to one where renewable power dominates our energy economy is going to require some additional technologies. These may include storage, enhanced grid management, and demand-response power management, but they could also include something entirely new. Recently, a paper took a look at a technology I hadn't realized even existed.

The paper evaluates the potential of what its authors are terming "nighttime photovoltaic power," and the simplest way of thinking about it is "running solar panels in reverse": generating electricity by radiating energy away into space. The efficiency is nothing like that of standard photovoltaics and can't even get there except in unusual circumstances. But as the name implies, it can keep generating power long after the Sun goes down.

The easiest way to understand this tech is to think of a photovoltaic device in equilibrium with its environment. Here, incoming photons will occasionally liberate an electron, leaving behind a positively charged hole. These can then combine, radiating a photon back out of the device. When operating as a photovoltaic device, there's a large excess of photons coming in, producing a corresponding excess of electrons and holes that can then be harvested as electricity.

Now envision setting up the reverse situation: there are no incoming photons, and instead we ensure that an excess of photons is radiated away as infrared radiation. An excess of electrons and holes will now form, and those can again be harvested. Except in this case, we don't need any incoming light—instead, we need something to ensure that photons are extracted from the device at high efficiencies.

This latter requirement is something that researchers in a seemingly unrelated area of research has been working on. There's a "window" of infrared wavelengths that aren't absorbed by any of the gasses in the atmosphere. A carefully crafted material can absorb radiation at a variety of wavelengths but only radiate it back out at wavelengths that fit through this atmospheric window. People have been building devices that operate this way as a means of passively cooling buildings, and there are even ways of treating wood so that it operates in this manner.

Potentially, by linking a photovoltaic material that emits photons that are matched with a passively radiating device, it's possible to build a "thermoradiative cell" that can extract some electricity while radiating photons out into space. In contexts where there's a large cooling demand or a lot of waste heat, this could be an added benefit to the cooling that needs to be done anyway. But can it actually work in any practical way?

That's what Tristan Deppe and Jeremy Munday decided to find out. Their paper analyzes everything from the semiconductor bandgaps needed for this to work to the wavelengths normally present in the atmosphere.

The atmosphere is an issue because no material is completely transparent to all the wavelengths of light that are typically present in our atmosphere. That means that all the materials involved—the one radiating away the infrared and the one generating spare electrons—will absorb some of the stray photons, decreasing the overall efficiency of the device. The bandgap is an issue because the infrared wavelengths needed for this to work are relatively low-energy, so they need a much smaller bandgap than the silicon used in most photovoltaic cells. The researchers suggest that a family of mercury-cadmium-tellurium compounds appears to have the right properties.

For all their initial calculations, Deppe and Munday assume that the Earth will provide a constant source of 27°C (about 80°F) heat to drive the system. Under these circumstances, they estimate that these systems built with current technology can produce somewhere in the neighborhood of two to eight watts per square meter, with the value changing a bit based on season and location.

Compared to a photovoltaic panel, which typically hits in the area of 200 watts/meter2, that's pretty pathetic. But this could potentially generate 24 hours a day, which a photovoltaic panel most certainly cannot, so that offsets some of the disadvantage. Since much of the infrastructure would be identical for photovoltaic and thermoradiative cells, they also did an estimate of the benefits of a system that could automatically switch panels when the Sun goes down. They calculate that this would increase the power output of a solar farm by 12 percent.

For those sorts of incremental gains, the thermoradiative cells would need to have incredibly low prices to make economic sense. But when there are co-benefits, like cutting down the cooling bills for buildings in hot climates, the economics might shift a bit.

The really interesting part, however, comes when Deppe and Munday look into what can be done with waste heat. With a starting heat source of 170°C, a thermoradiative cell could produce roughly the same number of watts/meter as a solar panel. While that temperature is hot—it's well above the boiling point of water—it's within the range of what might be considered waste heat for industrial plants and steam generators. And if linked to things like geothermal or solar-thermal plants, it would provide a way of extracting more energy from an existing renewable resource.

For now, this is all purely hypothetical; many of the numbers in the paper are from idealized situations, and we have no idea how close to those we can get in the real world or how cheaply these devices could be manufactured. But the idea is a clever extension of existing technology that could potentially integrate with a variety of existing systems.

Anti-solar cells: A photovoltaic cell that works at night.

The Downside of Solar Energy.