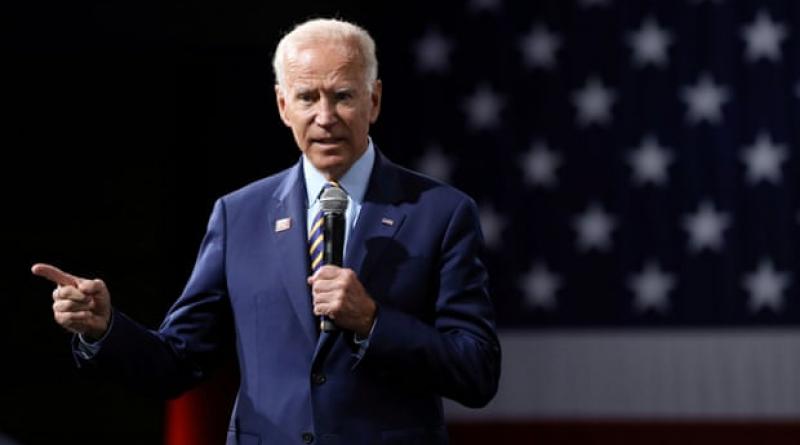 Biden’s $2tn green agriculture plan is ambitious but realistic. That’s important, because everything is riding on it.

The world’s food supply is imperiled by a climate crisis already upon us, and Joe Biden this week put forward an agenda to address it that’s as bold as you could hope from a man who actually intends to get elected.

This spring, prominent scientists warned that a multi-decade drought previously forecast for 2050 is already taking shape in the Great Plains and the south-west. The implications are enormous, from the tinder of California’s wine country to the giant cattle feedlots around the Panhandle that will run out of water within 20 years.

Iowa climate and soil experts say we will have a difficult time growing corn, the world’s most-used crop, in 25 years. In this, the buckle of the Corn Belt, yields could suffer by a third or more. Extreme weather is scouring fields and washing away entire Iowa towns near the Missouri River. Farmers hawk the weather closer than anybody, and they know they need help to adapt. If we don’t change, we’re set for a food production crisis.

Tom Vilsack, the former US secretary of agriculture, advised Biden on his rural climate action plan.

“It all starts with the understanding that agriculture is key to getting a handle on climate change,” Vilsack, who was also previously governor of Iowa, told me Wednesday. “We’ve got to use our rural lands more effectively to get agriculture to net-zero carbon.”

Agriculture is a leading contributor to climate change through petrochemical fertilizer over-application, CO2 emissions from ethanol plants, methane from livestock production, and soil degradation. Vilsack says the sector can be turned into a hero in the climate battle by paying farmers to prevent pollution and sequester carbon.

“The idea is that we can’t regulate our way to net-zero. We have to incent farmers to do what they want to do and know how to do. You do that through increased conservation payments. And, you recognize that society has got a stake here, and that foundations and corporations should invest in paying farmers to sequester carbon. We need to create a carbon market that actually works,” Vilsack told us.

The Biden plan raises the idea of a “voluntary” carbon market. That’s all he can do going into an election. Taxing energy brought out the yellow jackets in France. Taxing carbon emissions cannot be avoided following the election – volunteers will not create the necessary scale. But there are experiments underway with private-sector carbon trading schemes that are interesting pilots. While carrots are always better than sticks, at some point the US has to lead the world by taxing carbon emissions. We don’t have much time.

Otherwise, Biden’s $2tn energy plan is comprehensive, bold and optimistic. It promises to revive struggling auto towns in the midwest by building a new fleet of electric vehicles (a road the industry is already on). Since most renewable energy projects require land, rural areas are positioned to win with a wave of investment in wind and solar that brings hi-tech jobs to little towns along country blacktop roads. I know, because I live four miles away from the largest wind complex in North America, in Storm Lake, Iowa. We could reap even more benefits if we could clear transmission and grid bottlenecks to get clean, low-cost windpower from north-west Iowa to Chicago. Biden addresses it with a smart-grid plan backed up by massive battery banks.

Already, Iowa produces about half its power from wind. Even Texas loves wind energy. This is something around which conservatives and liberals can come together.

Other important solutions are at hand – planting cover crops for fall and winter to hold soil, suck up nitrogen and sequester carbon; planting grass along rivers to prevent pollution; new feedstocks such as sweet sorghum or hemp for carbon-neutral biofuels production: and on and on. The Farm Bureau on the right and the National Farmers Union on the left agree. We can reduce pollution of the Gulf of Mexico, and offset much of our carbon footprint, by planting a third more grass and a third less corn. By enforcing anti-trust laws already on the books, huge food conglomerates that are burning down the Amazon rainforest can be brought to heel.

Biden describes a civilian climate corps to help build conservation infrastructure, methane capture from livestock operations, and restoring public funding for research universities that were purchased over the years by Monsanto and the Koch brothers.

This is not the greenest of platforms. But it’s plenty good for Governor Jay Inslee of Washington, who ran for President on the climate platform. Inslee said he was “thrilled” with the Biden framework and called it “visionary”.

It’s an excellent start for agriculture and food security. It recognizes that our food system will kill us at the current rate, but we can adapt it for rural prosperity and global security. We can clean up our water, make land more resilient to impending heat and drought, and meet our food production demands while reversing a decades-long policy of disinvestment in rural America. Sustainable agriculture will also mean healthier food.

Biden offers an ambitious start that is politically calibrated not to do him in – because if he doesn’t win, all the best ideas are but dust blowing over the Kansas plains on a hot July day.