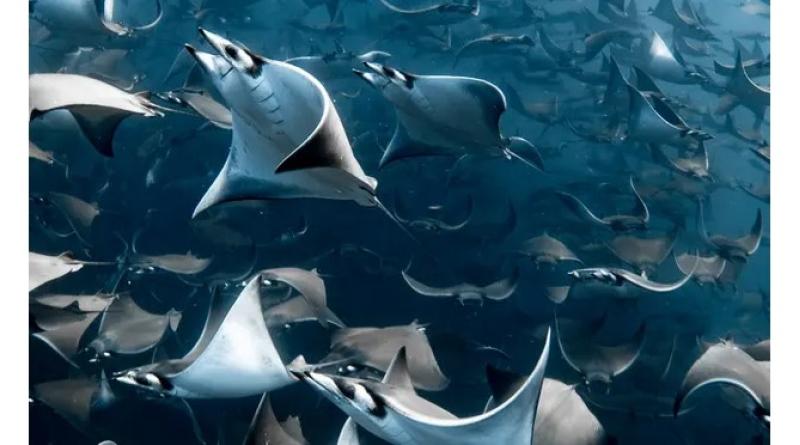 The world has a “once in a lifetime” chance to protect the high seas from exploitation, warned scientists and environmentalists, as negotiators meet at the UN headquarters in New York this week to hammer out a new treaty on the oceans.

One scientist described the treaty, which will set out a legal framework to protect biodiversity and govern the high seas, as the most significant ocean protection agreement for four decades.

A vast portion of the ocean, 64% by surface area, lies outwith the exclusive economic zones (EEZs) that cover approximately 200 nautical miles from the shorelines of individual states. Referred to as the high seas, they host a wide array of ecosystems and species, many insufficiently studied and recorded. The increasing reach of shipping vessels, seabed mining and new activities such as “bioprospecting” of marine species have put the high seas and its biodiversity at increasing risk of exploitation.

Since 1974, there has been a nearly 50-fold increase in global container ship capacity.

A group of 50 countries has signed up to the 30x30 coalition, which launched in January 2021 and aims to protect 30% of the planet’s land and sea by 2030. But without an agreement, these much-heralded pledges will have no legal basis in the high seas.

Currently, all countries have the right to navigate, fish and carry out scientific research on the high seas with few restrictions. Only 1.2% of this marine area is protected.

Jean-Baptiste Jouffray, a researcher at the Stockholm Resilience Centre at Stockholm University who has quantified the rise in human pressures on the marine environment, describes a “blue acceleration”, or dash for resources, over the past two or three decades. “You have a race for the ocean in all these different sectors, but there is no overview.”

“One of the fallacies about the high seas is that you have this great big empty space. The other is that it is a quiet space. Both of those are untrue,” said Doug McCauley, associate professor of ocean science at the Benioff Ocean Initiative at the University of California, Santa Barbara.

“By all indicators it is busier that it has ever been. Shipping has increased by 1,600% since 1982, when Unclos [the UN law of the sea] was signed. Industrial fishing takes place farther and farther from shore and more than 55% of the ocean is fished. There is new interest in offshore oil and gas. And there is the threat of mining in the deep sea.”

McCauley contributed to a paper for the Pew Charitable Trusts highlighting 10 biodiversity hotspots in the high seas that would benefit from protection. They include the Costa Rica Dome – nutrient-rich waters that attract yellowfin tuna, migratory dolphins, endangered blue whales and leatherback sea turtles – and the Emperor Seamount chain, which arches north-west of the Hawaiian islands towards Russia, a highly biodiverse series of seamounts.

The paper concludes that, while a patchwork of international bodies and treaties manage resources and human activity in areas beyond national jurisdiction – including fishing, whaling, shipping and seabed mining – they vary greatly in their mandates, and their jurisdictions often overlap. This piecemeal approach “leads to a degradation of the environment and its resources”, said the paper. It also makes setting up marine protected areas legally challenging.

“The treaty won’t create protections for hotspots but will hopefully create a structure so that we can create international parks for the first time,” said McCauley. “It’s a starting place and a really important starting place.”

Peggy Kalas, of the High Seas Alliance, said: “After decades of negotiations and planning, the world has a once-in-a-generation chance to build meaningful protections for an environment that supports life as we know it.

“It is hard to exaggerate how crucial these talks are for the multitrillion-dollar global ocean economy, a vital food source for billions of people and perhaps the best protection the planet has from climate change.”

However, NGOs expressed concern over being excluded from this week’s negotiations, after the UN restricted entry to delegates and intergovernmental organisations due to Covid.

Will McCallum, head of oceans at Greenpeace, which has long campaigned for a network of ocean sanctuaries, said it set a worrying precedent. “These negotiations are simply too important to avoid proper scrutiny; the UN should review its decision and allow civil society to participate in a safe and meaningful way.”

The UN general assembly voted on 24 December 2017 to convene a multi-year process to develop a treaty on “the conservation and sustainable use of marine biological diversity of areas beyond national jurisdiction”.

Three of the scheduled negotiations have taken place. The fourth and final set, previously scheduled for March 2020 but postponed due to Covid, is now running from 7 to 18 March at the UN headquarters in New York.

Last month, at the One Ocean summit in Brest, France, more than 100 countries, including the UK and 27 members of the EU, agreed to achieve a strong and robust UN high seas treaty, giving the talks a powerful political boost.