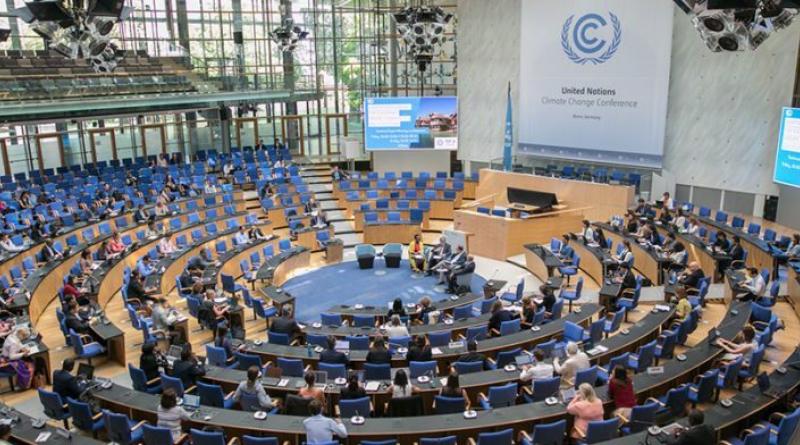 UN Climate Change News — UN Climate Change Executive Secretary, Patricia Espinosa, sent out very clear signals for more ambitious climate action at the start of the UN Climate Change Conference in Bonn (SB50). She described the current situation as a ‘climate emergency’ and called on everyone to take part in ‘the fight of our lives.’

Spelling out the nature of the challenge ahead, Ms. Espinosa said that to reach carbon neutrality by 2050 and to limit global warming to 1.5 degrees Celsius in line with the goals of the Paris Climate Change Agreement, we need to reduce emissions by 45% by 2030. With current commitments by countries - through their Nationally Determined Contributions - falling far short of this target, there was a clarion call at the opening of this meeting for governments and all stakeholders to increase ambition on climate action without further delay.

At a press conference, Ms. Espinosa highlighted the need for leadership in driving greater ambition on climate change. She echoed the United Nations Secretary-General António Guterres’s calls to action, referring to climate change as the most important challenge facing humanity. She also welcomed the engagement of Pope Francis, who has called climate change ‘a brutal act of injustice towards the poor and future generations.’

Ms. Espinosa outlined what is currently being done to increase climate action, including finalizing the Paris Agreement implementation guidelines and working with stakeholders to accelerate the pace of climate action. She called last December’s climate change conference in Katowice, Poland, a major success, both for multilateralism and for the climate change process, with the approval of the Paris Agreement work programme.

Concerning the outstanding issue of Article 6 of the agreement, Ms. Espinosa urged governments to use the opportunity at this session to find solutions allowing solid rules for carbon markets to finally take shape.

Youth’s message will not be ignored

Ms. Espinosa praised the ‘unmistakable message’ being sent by young people around the world that we are facing a ‘climate emergency.’ With a sizeable group of youth in attendance at this conference, she pledged that their voices would be heard in the UNFCCC process.

As part of the important task of educating the public on climate change, Ms. Espinosa announced that in the workstream under Action for Climate Empowerment (ACE) there will be a call for more climate-related content in classrooms. She also spoke of the crucial voice of local communities and indigenous peoples, stating that their participation in the formal climate change negotiations was an important enrichment to the process.

On the important issue of climate finance, Ms. Espinosa said that developed countries must be reminded of the obligation to mobilize USD 100 billion annually in funding for developing countries by 2020 for action on mitigation and adaptation. She added that it was also important to engage with global investors to ensure that financial flows are aligned with the objectives of the Paris Agreement.

Acknowledging the large but disparate number of climate finance announcements being made globally, she spoke of the need to bring these pledges together in a ‘unity of purpose,’ adding that the Climate Action Summit organized by the Secretary-General in September will be an important opportunity in this regard.

With the overriding emphasis at this June meeting being on the need for raised ambition, Ms. Espinosa also highlighted the upcoming summit as presenting a further golden opportunity in this regard, with Mr. Guterres asking nations to come not with good speeches, but rather with clear and ambitious plans for climate action.

UN: Growing at a slower pace, world population is expected to reach 9.7 billion in 2050 and could peak at nearly 11 billion around 2100.